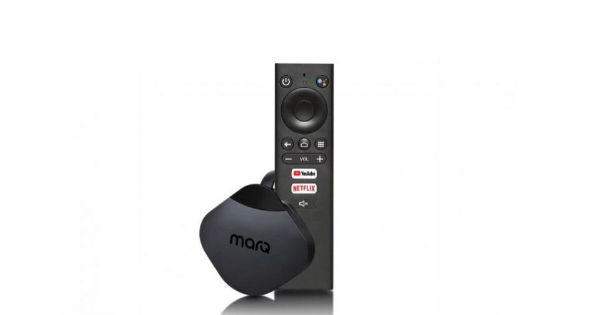 Flipkart has launched a new streaming stick in India under its private brand MarQ. Dubbed as MarQ TurboStream, the device is equipped with the latest Android 9.0 OS and supports full HD resolution at 60 frames per second. It packs 1GB DDR3 RAM and 8GB storage. The TurboStream streaming stick supports 2.4GHz and 5GHz Wi-Fi as well as Dolby Digital Audio, and comes with a voice-controlled remote with Google Assistant. It also comes with built-in Chromecast, that allows users to cast their smartphone screens onto the TV.

MarQ TurboStream streaming stick’s remote has shortcut buttons for Netflix and YouTube, has Bluetooth 4.0 connectivity, and has support for Google Play Store as well. The streaming device is powered by a quad-core processor with Mali 450 GPU and USB/OTA software update. It has support for Netflix, Hotstar, Zee5, Spotify, Eros Now, and more streaming apps. MarQ TurboStream streaming stick is priced at Rs 3,499 and is already available on Flipkart.

Adarsh Menon, Senior Vice President – Private Brands, Electronics and Furniture, Flipkart, said, “Appetite for streaming devices and smart TVs has been growing in India, particularly outside the top metros. The MarQ TurboStream is designed for these customers, to help them turn their regular TVs into smart TVs. With the Android operating system being so popular in the country, the user interface of our streaming device will be familiar and will help customers adapt to the new technology quickly.”