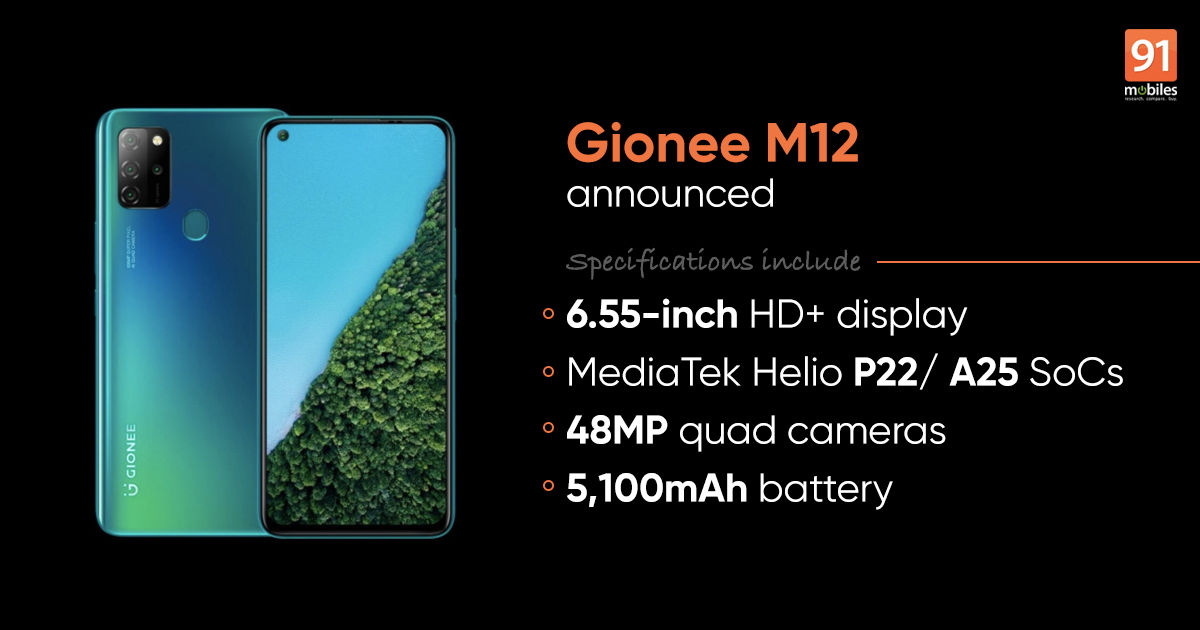 Gionee M12 price and specifications were announced in Nigeria this week and it looks like a lower-specced version of the M12 Pro that was announced last month. Key Gionee M12 specs include a 6.55-inch HD+ punch-hole display, 48MP quad rear cameras, 16MP selfie camera, and a 5,100mAh battery. Interestingly, the smartphone comes in two chipset variants – one powered by the MediaTek Helio P22 SoC and the other with the Helio A25 SoC. The chipsets are coupled with up to 6GB RAM and 128GB user-expandable storage. Here’s a closer look at Gionee M12’s price, availability details, and complete specifications.

The Gionee M12 comes with dual SIM support and runs Android 10 OS out of the box. The handset sports a 6.55-inch HD+ display with a punch-hole in the top left corner to accommodate the selfie camera. At the core of the phone lies MediaTek Helio P22/ A25 SoC paired with up to 6GB RAM and 128GB storage. The storage is further expandable using a microSD card.

For photography, the Gionee M12 employs a quad-camera setup that includes a 48MP (f/1.79) primary sensor, a 5MP 115-degree ultra-wide lens, and a couple of 2MP sensors. The front camera of the phone gets a 16MP snapper for selfies and video calling. There is a fingerprint scanner for security. Connectivity options include 4G LTE, Wi-Fi 5, Bluetooth 5.0, GPS, FM radio, 3.5mm headphone jack, and Type-C port for charging. The Gionee M12 packs a 5,100mAh battery and supports 10W charging.