“This makes it possible for the content to continue to the next page, just like when reading a traditional book”

According to a new patent design, Google seems to have a new approach for the foldable design than we have seen so far. The Mountain View giant had filed for a patent with the WIPO (World Intellectual Property Office) for a “foldable display device with multiple screens,” towards the end of 2018. The patent was published on June 27th and showcases a folding smartphone with multiple screens that fold/ unfold like a book. 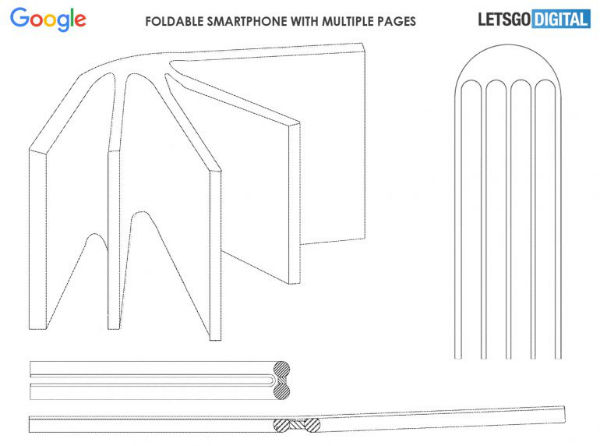 The patent showcases a foldable smartphone with multiple scrollable AMOLED displays that are held together by a book-like spine. The components like battery, processor, camera, and others are on the rear. While the patent only shows five pages, it can be any number. Both the front and back of the display panels can be used to display content. This makes it possible for the content to continue to the next page, just like when reading a traditional book. Since it is a unique one-of-a-kind design, the interface should be fine-tuned to adjust to the flex, and this should be a while.

Since this is still in the patenting stage, it isn’t clear if Google wants to make such a design reality or it will just be another unique idea that the company cooked up. Given that Google doesn’t produce displays on its own, it will need a partner. Google’s Pixel 3 made by Foxconn, while HTC and LG were responsible for previous generations.

At the I/O 2019 developers conference, Google confirmed that it has been researching folding screens for a long time and also developed a variety of foldable screen prototypes as well. For all we know, it may take a long time for Google’s multiple page style foldable design to hit production, considering how Samsung and Huawei foldable smartphone are yet to hit stores even months after their announcement.