“The official accessories for the Google Nexus 6 smartphone will be available starting at Rs 2,100”

Google recently listed the Nexus 6 flagship smartphone on the Play Store in India with a starting price of Rs 44,000. Now it appears that the company is also planning to launch official accessories for the new Nexus very soon. Google has listed the official accessories for the Nexus 6 on the Play Store in the US, which includes the Stand Folio case and the Naked Tough case. 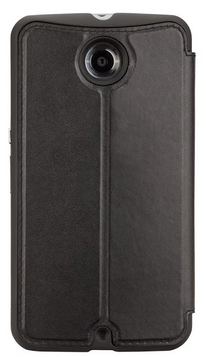 The Google Nexus Stand Folio case has been priced at $40 (around Rs 2,400), and the Naked Tough Case is listed for $35 (approx. Rs 2,100). The Stand Folio Case for the Nexus 6 will let you watch movies in a stand mode, while the Naked Tough case is a dual-plastic layered cover that comes with a kickstand at the back.

The Google Nexus 6 is the latest Nexus smartphone, and has been designed by Motorola, based on the design of the Moto X 2nd-gen (review | FAQs). The phone flaunts a 2K resolution AMOLED display measuring at 5.96-inch. It is fuelled by a 2.7GHz quad-core Qualcomm Snapdragon 805 processor, paired with 3GB of RAM and an Adreno 420 GPU. The device is powered by a 3,220mAh battery that supports Turbo and Qi Wireless charging. Another main highlight of the Nexus 6 includes a 13MP primary camera on the back with optical image stabilisation, and a 2MP front snapper for self portraits.

In related news, Google is reportedly expected to launch the Nexus 9 tablet in India on November 12th. The latest Nexus tablet is manufactured by HTC, and features a metal frame around the edges and BoomSound Stereo speakers in the front.