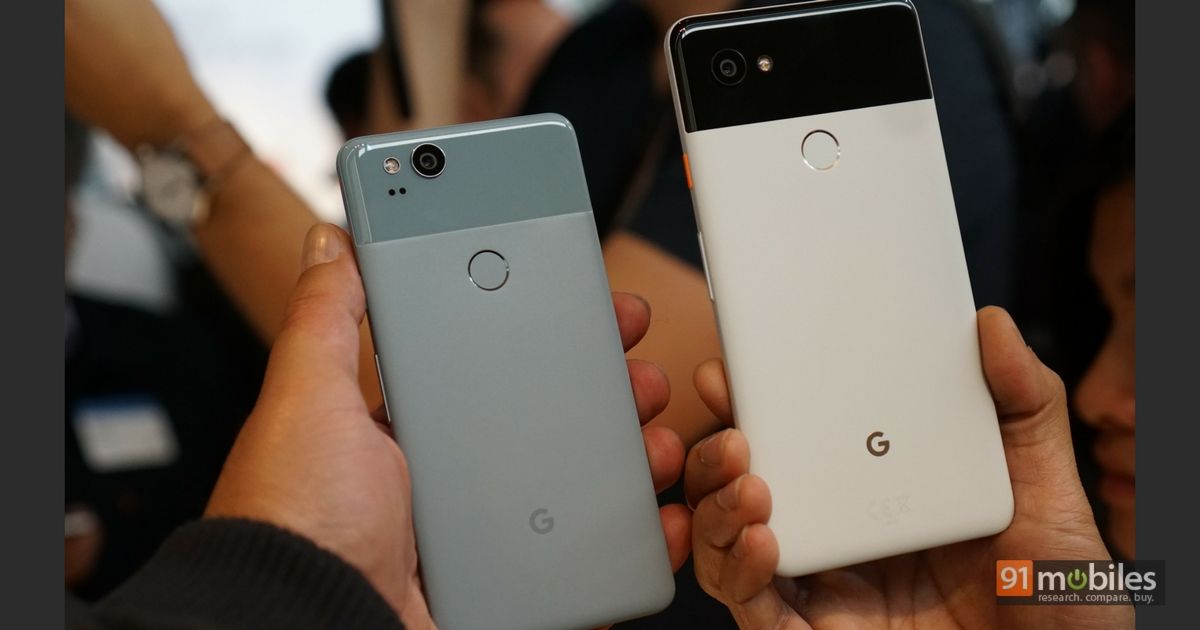 “The latest phones to carry Google branding pack loads of goodies in their premium, pricey packages”

Last year, Google surprised everyone by ditching its fan-favourite Nexus lineup of smartphones in favour of the Pixel and Pixel XL (review). The devices didn’t just turn out to be powerful, smooth daily drivers, they proved to be excellent shooters too. In fact, the Pixel duo can still be easily counted among the best smartphone camera phones even now, after a year of launch. And today, the Mountain View Major has announced successors in the form of the Pixel 2 and Pixel 2 XL… finally putting to rest all the speculation and leaks we’ve seen around the phones in the months leading up to the launch. Can the new Pixel 2 and its larger sibling match our raised expectations and also pack in enough to compete against the latest premium flagships from other brands? Join us as we go hands on… 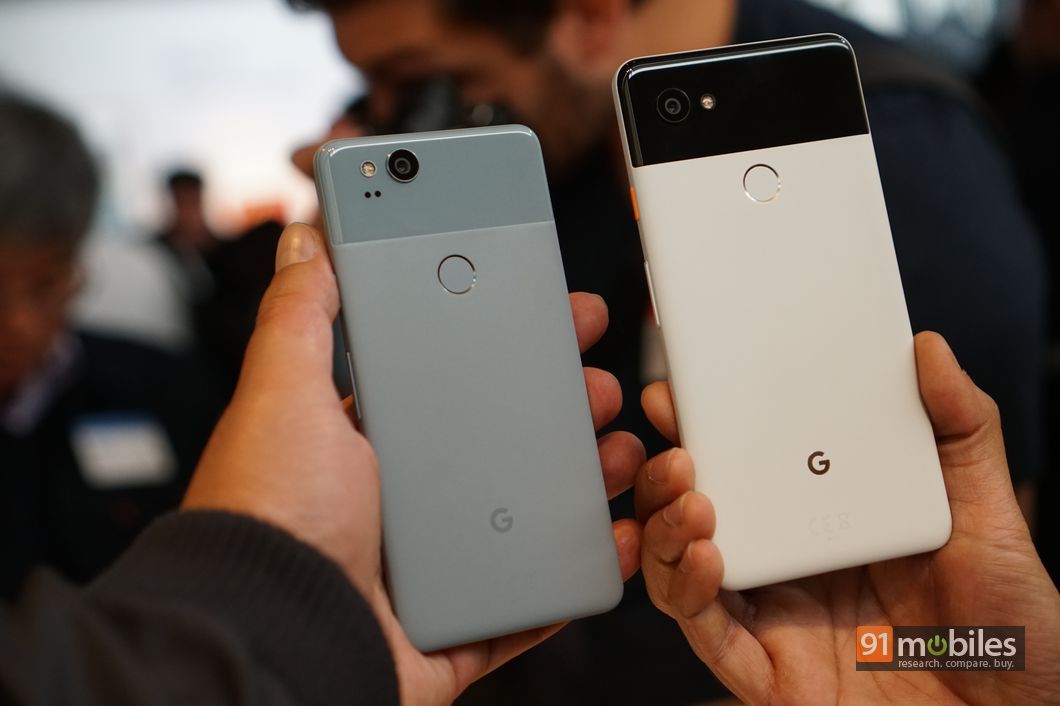 Two things were clear right from the outset – the premium positioning, and the pure, latest Android experience. The Pixel 2 and the 2 XL stick to these – offering loaded specs and running the latest Android Oreo in stock form. The dual tone design that received mixed response last year is back too. We were really keen to find out whether the new “made by “Google” phones embrace one or both of the big smartphone trends (namely dual cameras and so-called bezel-less displays) or not. As it turns out, they skip the dual cameras, but the Pixel 2 XL does rock an 18:9 screen and follows in the footsteps of other current-gen flagships like the Samsung Galaxy Note8.

Just like last year, the only differences between the Pixel 2 and the Pixel 2 XL are the screens (including screen size, type, aspect ratio and resolution) and the battery capacities. All other specs and features are the same.

The new pair of smartphones come clad in aluminium unibody designs, with differently coloured glass panels up top at the rear. The Pixel 2 is smaller of course, thanks to its 5-inch FHD display that sticks to convention with a 16:9 aspect ratio. The AMOLED display sports a layer of 2.5D Gorilla Glass 5, is bright and crisp. On the other hand, the Pixel 2 XL rocks an 18:9 pOLED display measuring 6-inches, and rocking a resolution of 2,880 x 1,440 pixels (QHD+). This one utilises a layer of 3D Gorilla Glass 5 for protection. 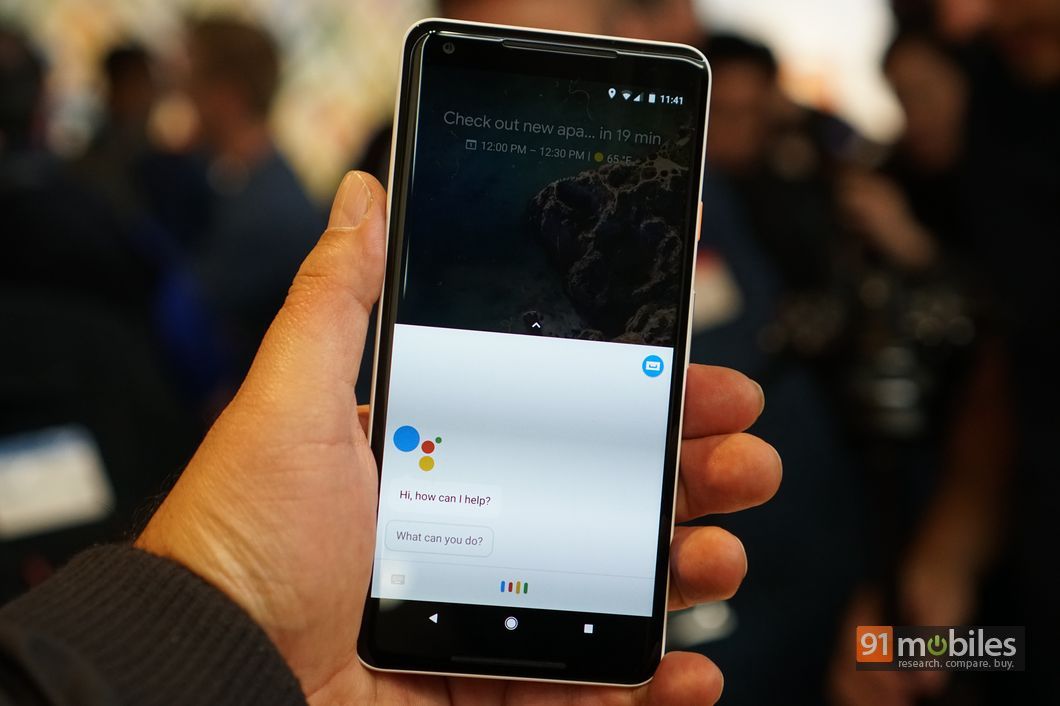 A couple of other aspects where the new Pixel phones match other flagships include IP67 ratings (signifying resistance to dust and water), and sadly, exclusion of 3.5mm headset sockets. The Pixel pair utilise USB Type-C for audio, and come with adapters in the box to let you use your regular headphones with 3.5mm plugs. Interestingly, both the new Pixel smartphones boast the Active Edge feature – squeezable sides to perform different tasks and actions, just like we’ve seen earlier on the HTC U11 (review).

The fascia includes stereo speakers, with slits on the top and bottom. The one on top doubles up as the earpiece, and is accompanied by the 8MP front shooter. The top and bottom bezels on the Pixel 2 are significantly wider than the ones on the Pixel 2 XL, owing to the different screen aspect ratios. On the left spine, you’ll find a tray for a nano-SIM, while the right spin is home to a power key and a volume rocker. Note that the power key is coloured differently and stands out quite a bit.

At the rear, you’ll see the single camera lens, the flash module, the circular fingerprint scanner and a “G” logo. The placement of the cameras is slightly different on the two Pixels – on the Pixel 2, the flash is on the top left with the camera placed on its right, while on the 2 XL, the camera is on the leftmost side with the flash located towards its right. 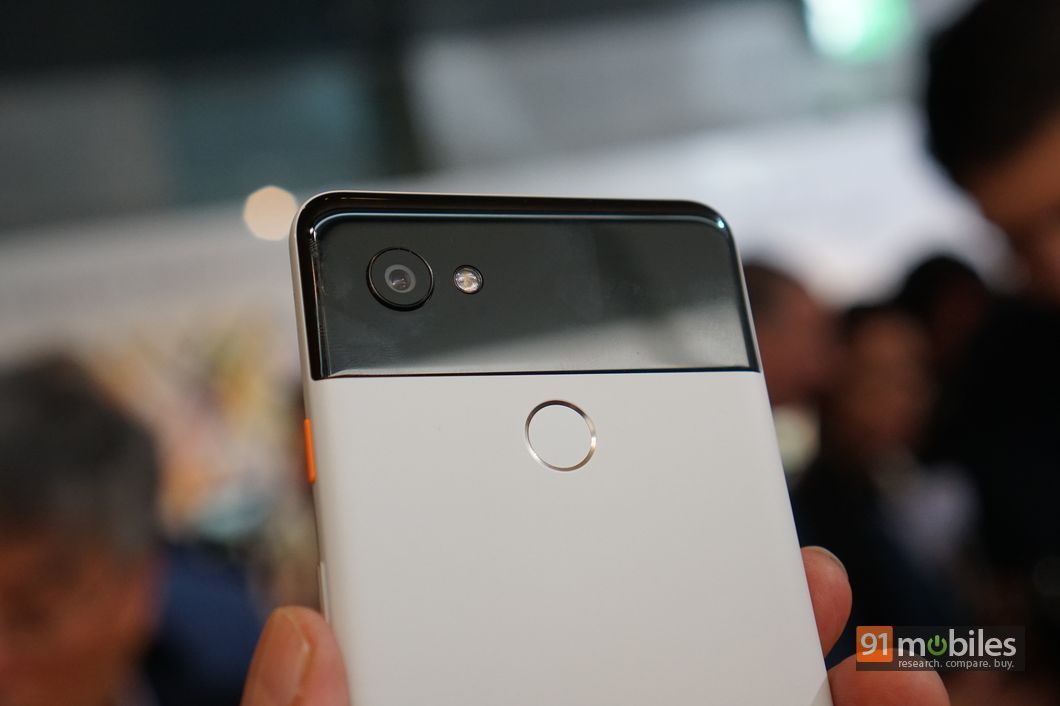 As far as the details on the cameras are concerned, some might be disappointed to see that neither of the two models rock dual snappers. They also haven’t changed much in terms of the megapixel count, sticking to 12.2MP primary and 8MP front sensors. However, Google has added optical image stabilisation this time around, and the EIS from last years stays as well. You also get laser autofocus, dual-pixel tech, f/1.8 aperture and support for shooting 4K videos at 30fps. And an extremely interesting bit of information here is that the primary cameras on the new Pixel phones have received a score of 98 from DxOMark, beating the previous best of 94 held jointly by the Galaxy Note8 and the Apple iPhone 8 Plus. A couple of initial test shots we captured during our hands on indicated near-instant focussing speeds and excellent image quality. Needless to say, we can’t wait to get our hands on a review unit to see how well the new Google phones shoot… and we aren’t expecting anything less than stellar image quality after seeing the image quality from last year’s Pixel handsets. Speaking of the latter, here a few images of the new Pixel 2 XL shot with its predecessor, the Pixel XL… just for the sake of comparison.

The innards of the new models include the top-of-the-line Qualcomm Snapdragon 835 SoC married to 4 gigs of RAM. The storage isn’t expandable, but you do get two storage options in the form of 64GB and 128GB variants for both Pixel models. Breezy is the word that comes to mind if we were to describe our usage experience – the phones just seem to fly. However, do wait for our in-depth analysis before you hit the ‘Buy’ button – we do want to test out the two devices properly before we can recommend them whole-heartedly.

In terms of features, you’ll find the Google Assistant baked in as usual, spruced up with new features. There’s a Google Lens feature as well that will utilise image search and AI to let you do more with images, unlimited storage on Google Photos for full resolution images and up to 4K videos. Connectivity options cover NFC and Bluetooth 5.0, and Google has even included eSIMs inside the two devices… though we aren’t sure if we’d be able to use the latter in India, at least at launch time. 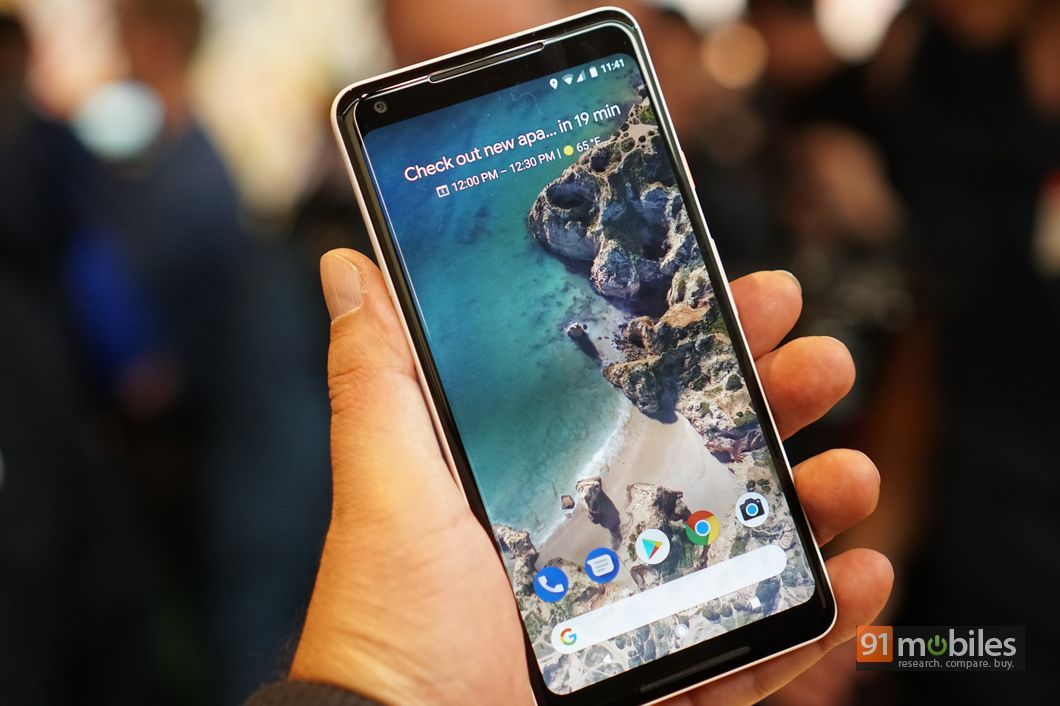 Talking about the launch, you’ll be able to buy the Pixel 2 in India starting November 1st, while the XL version will be made available a couple of weeks later on November 15th. With starting prices of Rs 61,000 and Rs 73,000 respectively for the base variants, it’s not going to be a walk in the park for the new Google phones, given the competition in the premium flagship space. Considering that the new Pixel pair are making a fashionably late entry, flagships from most top tier brands are already out and waiting to fight – devices like the Samsung Galaxy Note8 (review), the upcoming LG V30 (first impressions) and the trio of new Apple iPhones, the 8, 8 Plus (first impressions), and the soon-to-come futuristic iPhone X. This time though, Google hasn’t skimped on any features… and in the last one year, the Pixel brand has managed to make a name for itself, especially in terms of the shooting prowess. From what we can make out, Google now has a pair of phones that could shake up things in the premium segment in a big way. Interesting times ahead…

Disclosure: this writer was in San Francisco on Google India’s invitation