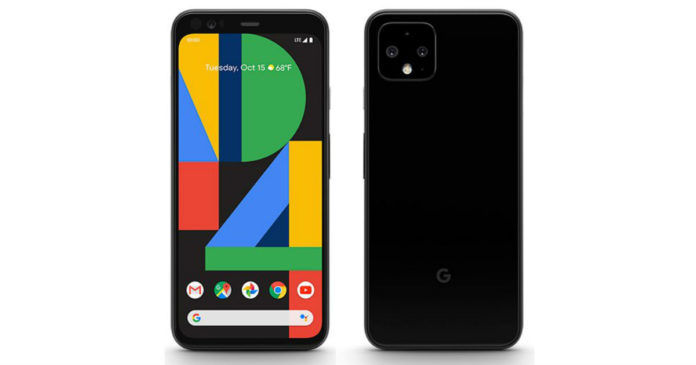 The Google Pixel 4 series launch is now just a fortnight away; however, ahead of that, an official-looking render of the phone has leaked online. Popular tipster Evan Blass has shared a render of the Pixel 4 smartphone, and it looks exactly the same as the previous leaks and rumours. There is a squarish camera module, which seems to house as many as three rear cameras with LED flash at the back, whereas the front panel has a tall display with no chin but thick bezels up top, similar to what we saw in renders by @OnLeaks. The top bezels will be home to the selfie camera, earpiece, and other sensors. What’s new is the wallpaper. The Pixel 4’s screen has ‘P’ and ‘4’ characters that may represent the lineup’s name and generation respectively. The four Google colours are present, along with a dark blue hue.

The render is believed to be of the smaller Pixel 4 smartphone since its sibling the XL model is expected to have a slightly bigger form factor. This seems to be the “Just Black” colour variant of the Pixel 4 with the white lock button on the right spine. The render further reveals the same Pixel launcher with date, time, and weather widgets up top and Google’s apps below just above the search bar. The missing fingerprint scanner from the back of the phone suggests that it could be on the front underneath the display.

As far as the specifications are concerned, the Pixel 4 series is expected to debut with Android 10 OS out of the box. The handset will most likely be powered by Qualcomm Snapdragon 855 SoC with up to 6GB of RAM and 128GB storage onboard. The Pixel 4 and Pixel 4 XL both will have gesture-based navigation support, Face Unlock, and USB Type-C charging port. The Pixel 4 duo features dual rear camera setup with an additional telephoto lens and a 12.3MP primary sensor.