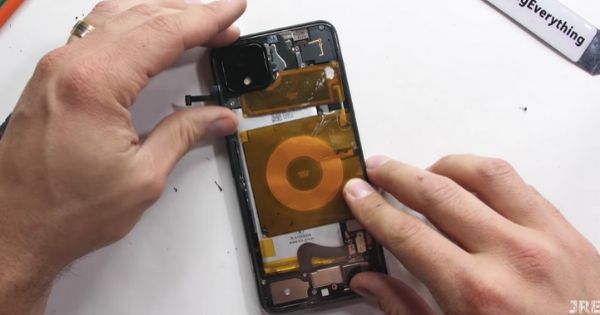 Google’s Pixel 4 series smartphones have already undergone a teardown, but if you wanted to know what the devices look with a clear glass back, then there’s a new video out now. Famous YouTuber JerryRigEverything has uploaded a new video where he takes apart the Pixel 4 XL to look at the internals. He also provides us with a closer look at the Soli radar chip that’s used for features such as Motion Sense and face unlock. With a clear glass back, the phone doesn’t look as good as the previous Pixel 3 though. The YouTuber also looks at the weak points in the frame, which led to the Pixel 4 XL failing the bend test.

In case you forgot, the Pixel 4 XL snapped in four different places around its frame. This is a pretty serious design flaw and Google hasn’t really acknowledged it yet. For those who haven’t seen the previous video by JerryRigEverything, the Pixel 4 XL was put through a bend test and it failed miserably. Although the phone was still usable with the front and rear glass in good shape, the frame was pretty much unsafe. The new video shows these weak points in the frame of the Pixel 4 XL.

As per the video, Google seems to be using less metal than other phone manufacturers. The frame of the phone is mostly made out of plastic, with a thin aluminium cover on the outside. This is why the frame easily cracked during the bend test. Apart from looking at the broken frame, Jerry also shows us the Soli Radar chip, which is used for the Motion sense feature and also the face unlock. It is a small sensor placed next to the earpiece and has mostly been a gimmick, although it can be useful sometimes in certain situations.

Next, he shows us how easy it is to remove the paint on the back glass and make the phone look cooler. Then, we also get to see the squeeze sensors that are located on both sides of the phone frame. Watch the full video below: