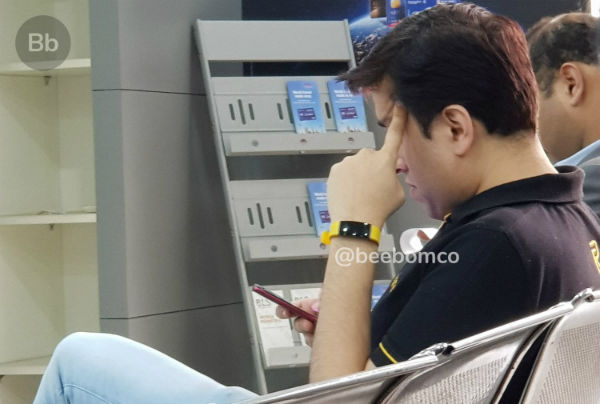 “In order to take on Honor Band 5 and Mi Band 4, which are the current best-selling fitness bands, Realme Fitness band will have to include a colour AMOLED display”

The realme fitness band will be launching in India in February, as confirmed by the brand’s CEO, Madhav Sheth. At the Realme 5i launch earlier this month, the executive gave a sneak peek a the typical yellow-coloured strap of the fitness band. Now, the complete design of the Realme Fitness band surfaced online, courtesy of Beebom. Realme India CEO, Madhav Sheth was spotted wearing the band at the Spanish Visa office in New Delhi. It shows a rectangular display, which could be a touchscreen as there is no physical button for navigation in view. Since the display was turned off, there’s no way to tell if it’ll have a coloured AMOLED panel or not. But in order to take on Honor Band 5 and Mi Band 4, which are the current best-selling fitness bands, Realme will have to include a colour display.

The design seems to be inspired by the Fitbit Inspire or Honor Band and the strap attaches to the display body, instead of wrapping around the display as seen on the Mi Bands. Unfortunately, details regarding its hardware specifications and features are scarce at the moment, but since the Realme C3 is scheduled to launch in the country on February 6th, there’s a good chance the Realme fitness band might tag along.

As for the Realme C3, it will be available on Flipkart and on Realme website when launched. The Flipkart landing page had listed the complete design and key specifications. The Realme C3 will flaunt a 6.5-inch display with a waterdrop notch and Corning Gorilla Glass protection. It is powered by the MediaTek Helio G70 SoC and will arrive in two RAM and storage configurations – 3GB + 32GB and 4GB + 64GB. It is likely to run on Android 10 with Realme UI custom skin on top. In terms of optics, the handset features dual cameras with a 12MP primary sensor, Chroma Boost, Slow-mo video, HDR mode, and Panorama selfie. We should know pricing and availability details next-week.