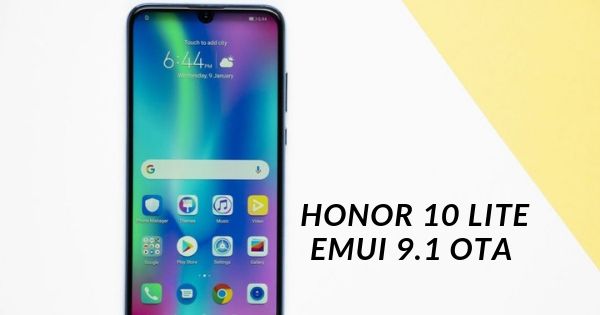 Honor has started rolling out the latest EMUI 9.1 software update for the mid-range Honor 10 Lite (review) in India. It’ll be available as an over-the-air update for all the users of the handset. The update includes several new enhancements to the system such as GPU Turbo 3.0, the Extendable Read-only File System (EROFS) and other features.

The biggest highlight of the new update is that it includes the new GPU Turbo 3.0 software. This is said to improve the gaming performance on the device. Titles such as Asphalt 9, PUBG, Fortnite, Modern Combat 5, and others should now be playable with high FPS and graphics. The GPU Turbo 3.0 also ensures improved battery life while gaming.

The EMUI 9.1 OS also upgrades the file system on the Honor 10 Lite to EROFS (Extendable Read-Only File System). As per Honor, this will offer better app performance, and smoothness, while also helping save more storage on the device. The data reading performance in low-memory conditions has also been improved along with security. Finally, the update also includes the new Video ringtone feature, which lets users set videos as ringtones.

Honor also states that the new update includes new AI features that will learn the users’ preferences and patterns. It can also learn the brightness settings that the user likes and will adjust the levels automatically when using certain apps. The update was released for the Chinese variant last month and a similar update is also available for Honor Play (review), Honor 8X, and Honor Y9 Prime 2019. If you haven’t received the EMUI 9.1 update for the Honor 10 Lite, don’t panic, it will be rolled out gradually. You can also manually check for the update in the Settings app.