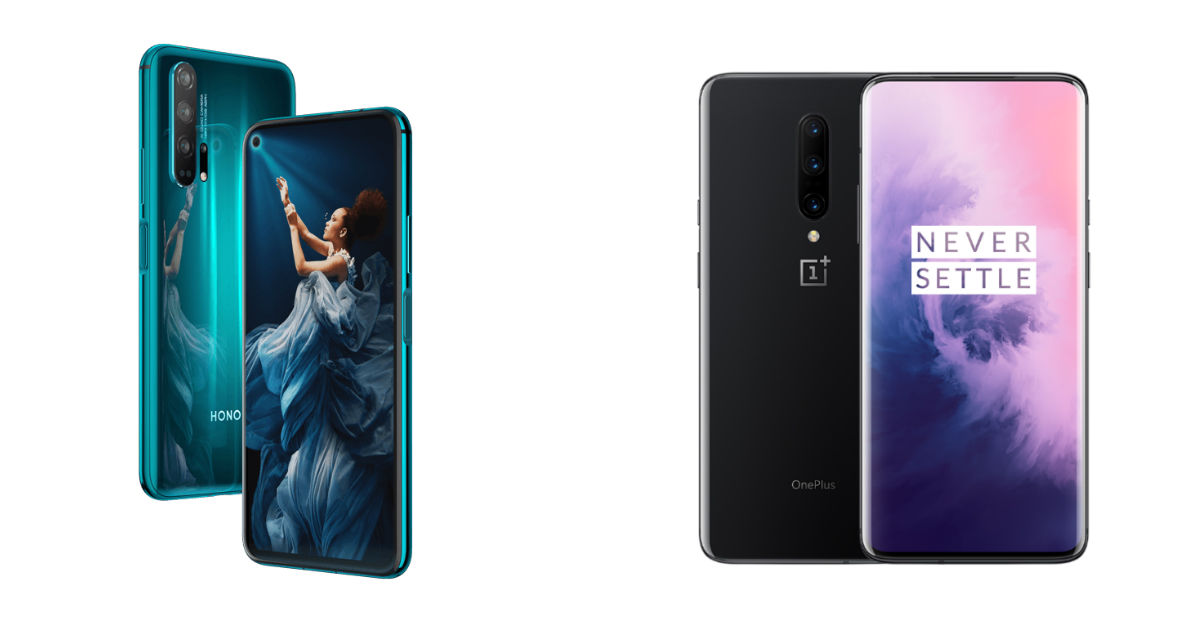 Huawei sub-brand Honor has expanded its latest Honor 20 series, adding the standard Honor 20 and the Honor 20 Pro smartphones. Both these devices are flagship class, but the Pro model steals the show. It could very well be the king of the budget flagships and offers more when compared to the newly launched OnePlus 7 Pro (review). Therefore, in this post, we will take a look at the differences in specifications and price between the two phones to find out which is more value for money. Let’s get started!

The new Honor model is a premium smartphone, which means that you won’t have to sell a kidney to get the best features. However, it isn’t going to be cheap either. The Honor 20 Pro price is €599 (about Rs 46,000) and will be available in only 8GB + 256GB configuration and Phantom Blue and Phantom Black colours.

Now, let’s compare the design and specifications of both the devices. Starting with the Honor 20 Pro, it has a gradient finish glass panel at the back and a punch hole display at the front. The quad camera setup at the back is laid vertically on the top left with the laser autofocus unit and LED flash placed next to it. The phone looks similar to the Huawei P30 Series. The OnePlus 7 Pro also uses a glass body, but has a no-notch or hole display at the front. This is achieved thanks to the pop-up selfie camera.

The display on the OnePlus 7 Pro is a 6.67-inch QHD+ (1,440 x 3,120 pixels) AMOLED panel with a 90Hz refresh rate. It is much better than the 6.26-inch inch IPS full-HD+ (1,080 x 2,340 pixels) display that’s found on the Honor 20 Pro. Therefore, if you want a great display, then you should probably just go for the OnePlus 7 Pro as the price difference isn’t that much. Notably, while the former features an in-display fingerprint scanner, the latter has a side-mounted fingerprint sensor that is integrated into the power button; pressing this button for a full second will fire up Google Assistant.

Coming to the hardware, both devices are powered by flagship chipsets from different manufacturers. The Honor 20 Pro uses the HiSilicon Kirin 980 chipset, whereas the OnePlus 7 Pro is equipped with the Qualcomm Snapdragon 855. Both are quite powerful and it is unlikely that you feel much of a difference in their real-world performance. The chipset is equipped with 8GB of RAM on the Honor device, whereas the OnePlus phone gets up to 12GB of RAM. For storage, both devices get up to 256GB of onboard storage.

In the camera department, both the Honor and OnePlus devices are well equipped. The Honor 20 Pro comes with a quad-rear camera setup similar to the Huawei P30 Pro, while the OnePlus 7 Pro has a triple camera setup at the back. The quad-camera setup on the Honor device consists of a primary 48-megapixel Sony sensor with f/1.4 aperture (the biggest yet on a smartphone), a 16-megapixel super wide-angle sensor, an 8-megapixel telephoto sensor with 3x optical zoom, and a 2-megapixel macro lens. For selfies, a 32-megapixel sensor is available within the hole-punch.

As for software, both phones run on a custom OS that is based on Android 9.0 Pie. Honor 20 Pro comes with Magic UI 2.1.0, whereas the OnePlus 7 Pro features OxygenOS. Both have their own set of features and advantages. The battery on both smartphones is 4,000mAh in capacity; however, the OnePlus model gets support for 30W fast-charging, while the Honor handset tops out at 22.5W fast-charging.

If you want a better overall package with a larger display, battery and a better OS, then the OnePlus 7 Pro should be your pick. The Honor 20 Pro is great and everything, but it doesn’t really dethrone the OnePlus model. Of course, it may make a better deal if the company ends up pricing it aggressively once it launches in India on June 11th. Till then, wait for our full review.