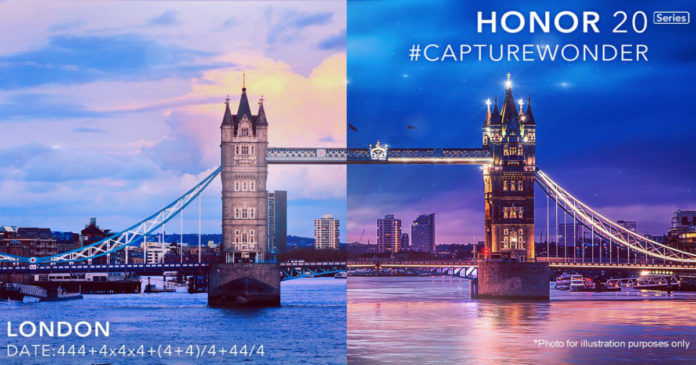 Huawei’s sub-brand Honor announced on Monday that it would be launching the Honor 20 series at an event in London on May 21st. The flagship duo has been in the news for quite some time and the key specifications, including pricing, were revealed. Unlike every year, Honor will be launching two models in the series this time, and they would be called Honor 20 and Honor 20 Pro.

How good are you at math? #HONOR20Series will be launched on ________! Fill in the blanks for #CaptureWonder. pic.twitter.com/6k0ejoMY1y

The Honor 20, successor to last year’s Honor 10, is expected to sport a 6.1-inch OLED display with a waterdrop notch and will reportedly have an in-display fingerprint sensor. The handset has been tipped to pack a 32MP front-facing camera and feature a triple rear camera setup with the 48MP primary sensor, a 20MP super-wide-angle lens, and an 8MP telephoto lens. The smartphone is expected to support 3x optical zoom and will likely run on Android 9.0 Pie-based EMUI out of the box. The phone is said to arrive in three RAM and storage configurations – 6GB RAM + 128GB, 8GB RAM + 128GB, and 8GB RAM + 256GB. It is expected to come with a 3,650mAh battery that supports 22.5W fast charging.

As most of the details are based on rumours, leaks and reports that surfaced the internet, nothing is confirmed yet. Stay tuned for more information.