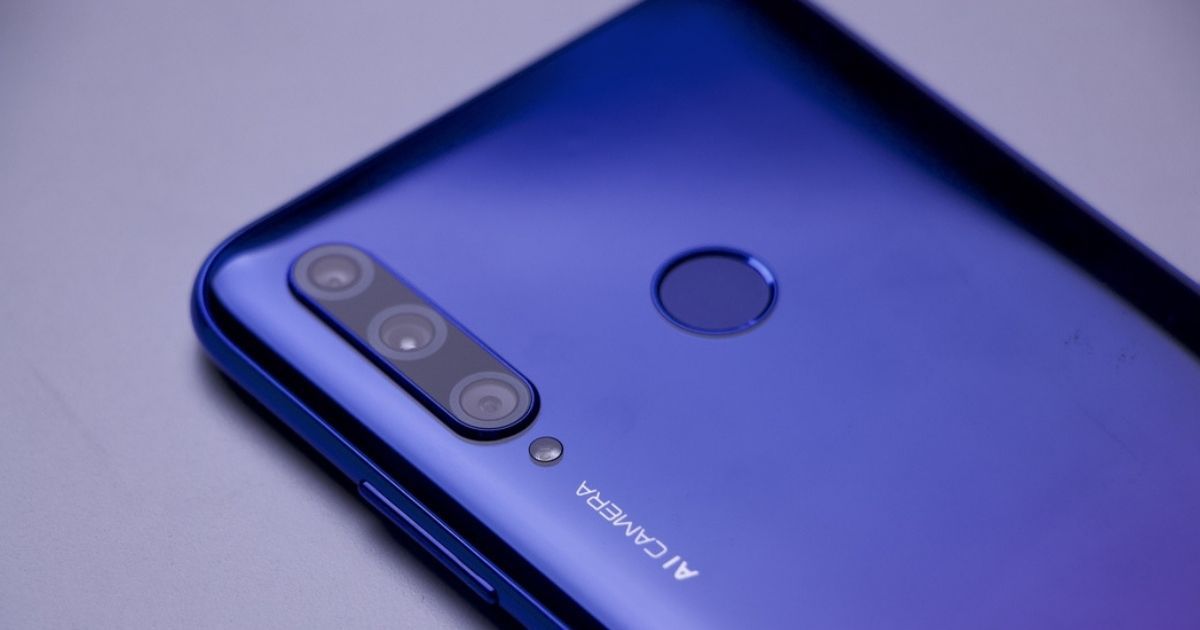 Amidst the clouds cast by Trump administration ban and the resulting suspension of ties by the likes of Google, ARM and others, Huawei and its sub-brand Honor has not stopped launching new devices. In fact, Honor is all set to launch its latest flagship smartphones, called Honor 20 and 20 Pro (first impressions) in India on June 11th. The company is also bringing the more affordable Honor 20i, which comes in as a successor to the Honor 10i, aka Honor 10 Lite. The smartphone arrived at our premises recently and here’s how I feel about it after using it for a short while. 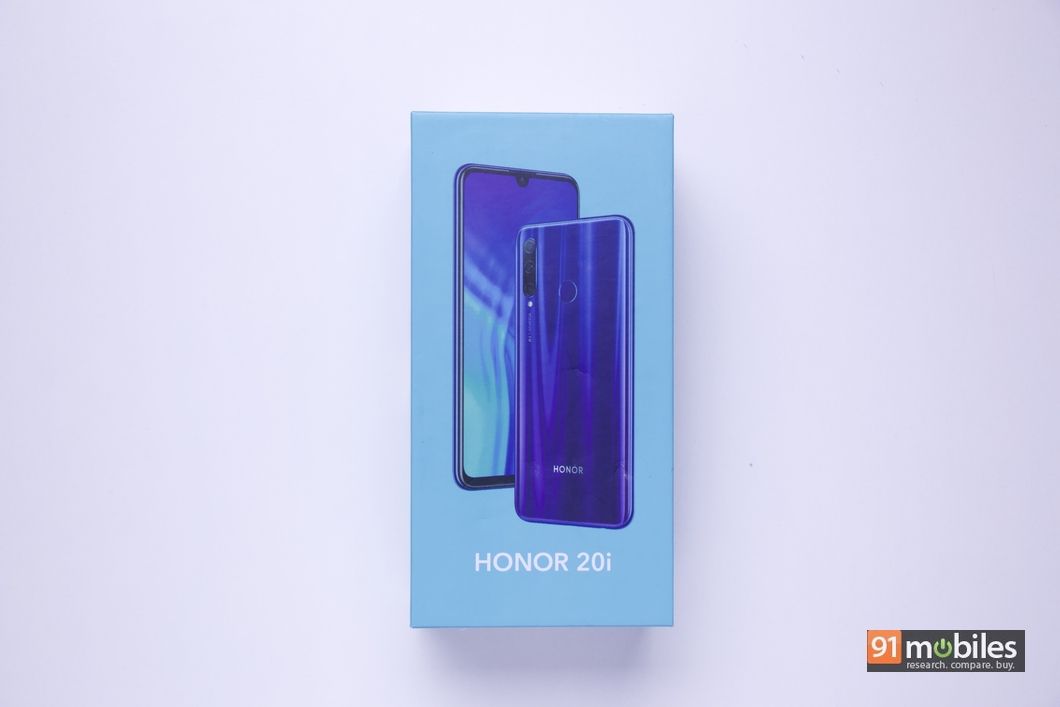 Similar to its siblings, the Honor 20i comes in a signature light blue packaging, which has minimal branding all around and just the visuals with the name of the phone on top. As soon as you lift the lid, you’ll find the Honor 20i clad in a plastic wrapper lying atop a cardboard sheath. The sheath contains a clear protective case and documentation for the smartphone. Below it, you will see a micro-USB cable, 2A wall charger and SIM-ejector tool. The company hasn’t included a pair of earphones with the packaging despite the 20i having the 3.5mm interface, so that’s a bummer for music lovers. 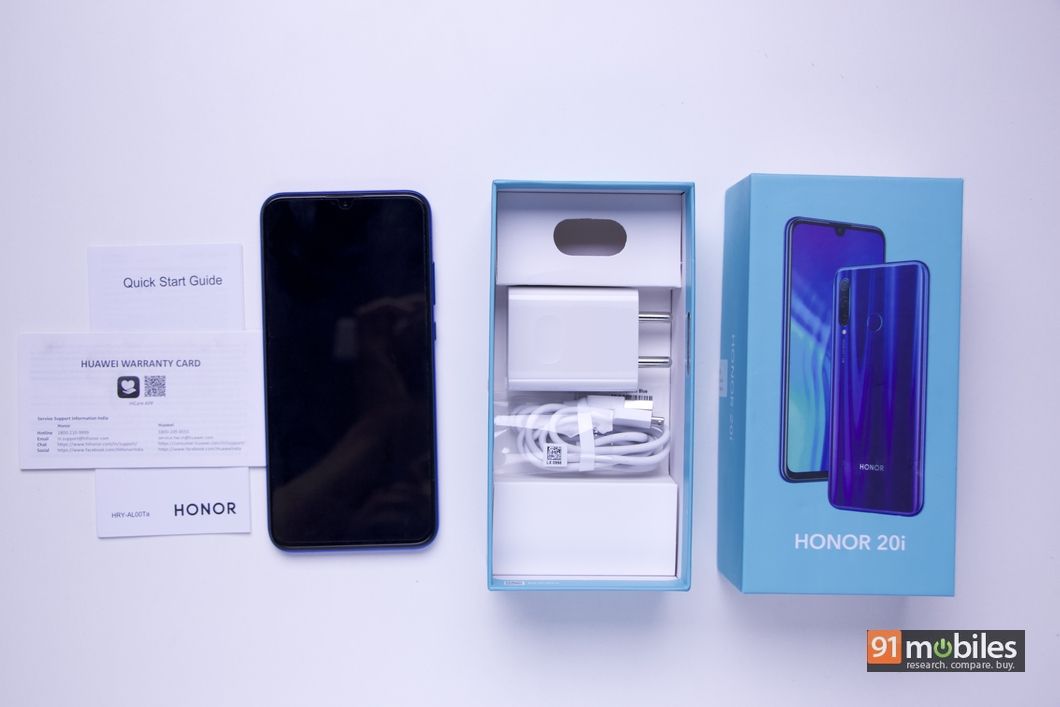 You know how they say not to judge a book by its cover, and it stands true for the Honor 20i. The smartphone is the complete opposite of how the packaging looks and I didn’t expect anything less since the brand is known for making stunning phones. The first thing that stood out to me is that the handset has a compact footprint, which means it’s comfortable for one-hand usage. The company is offering the Honor 20i in Phantom Red, Phantom Blue, and Midnight Blue colours. I have the Phantom Blue variant in my hand and the device looks attractive with a bluish purple paint job. However, the back is prone to smudges and also scratches, since it’s a glossy polycarbonate and not glass. I would suggest slapping the provided case to avoid any scratches. 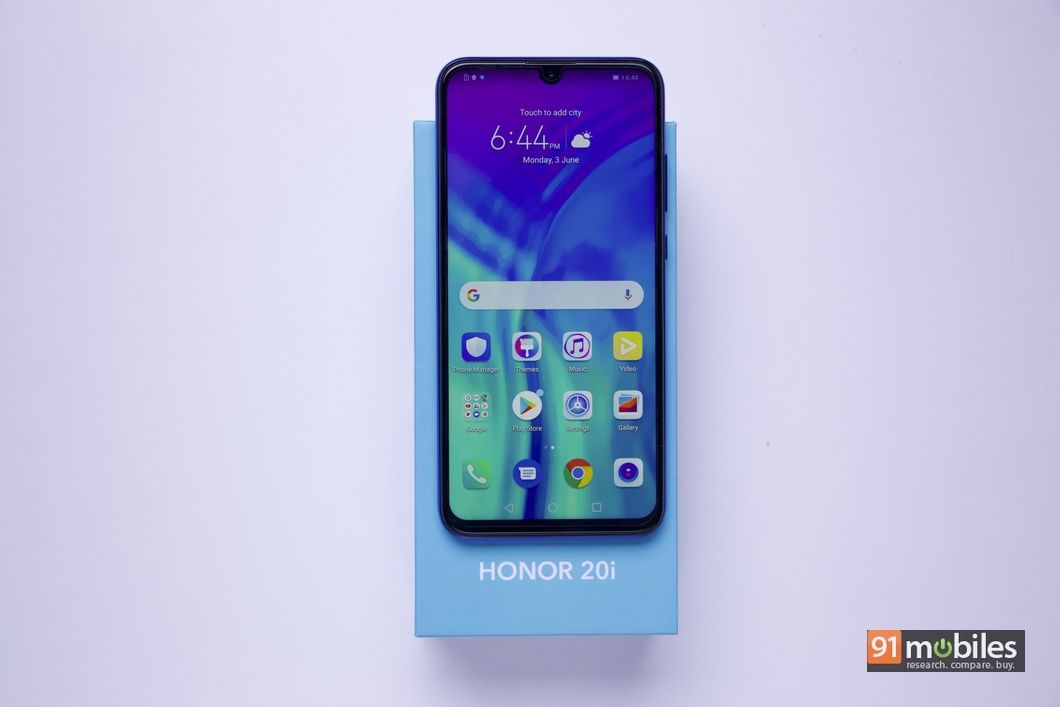 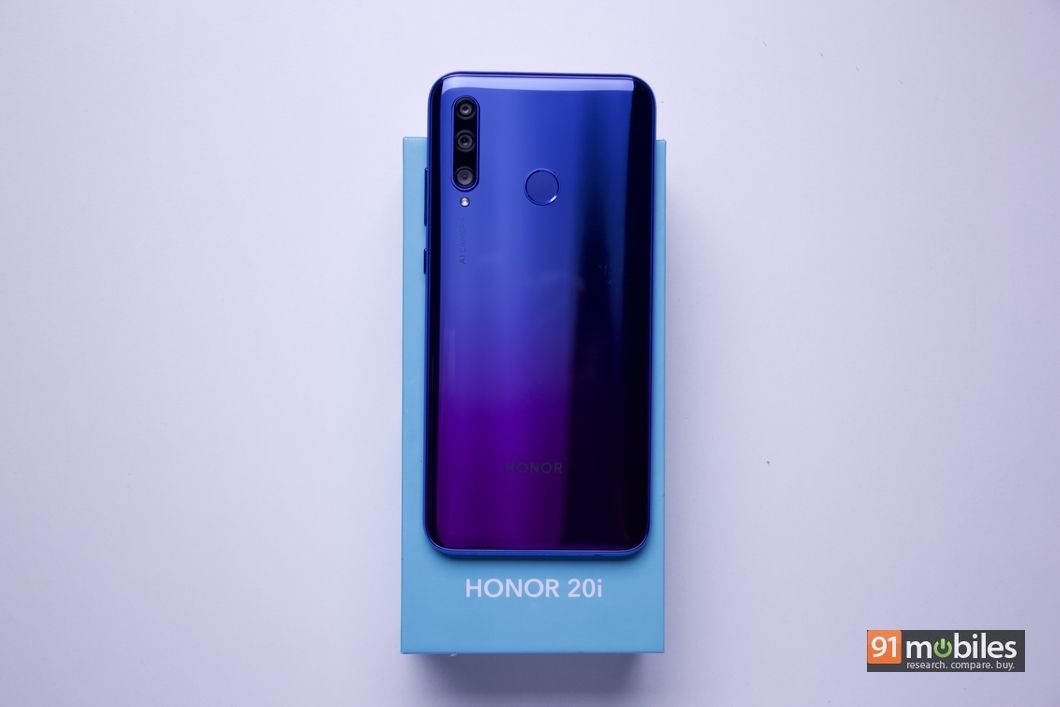 The sides of the Honor 20i also has the same bright blue paint job as the back panel, which is also constructed out of plastic. Speaking of the sides, you’ll find the hybrid-SIM slot on the top, physical buttons on the right edge and a 3.5mm socket, micro-USB port as well as speaker grille on the bottom. The rear panel is home to the triple-camera module in the top left corner and circular fingerprint scanner towards the centre. Like every other capacitive fingerprint scanner, the one on Honor 20i is also fast and accurate. There is face recognition as well, which again surprised me with its speed and accuracy. The face unlock is pretty interesting as it didn’t register my face with both eyes closed but did so when I had either one of my eyes open.

The Honor 20i belongs to the recent breed of smartphones that uses waterdrop notch. The panel measures  6.21-inches and offers a resolution of 1,080 x 2,340 pixels. The device offers a 90 percent screen-to-body ratio and the display has a 19.5:9 aspect ratio. While the IPS panel isn’t in the league of OLEDs and AMOLEDs, the colour reproduction is pretty vivid. I also didn’t face any legibility issues under direct sunlight and while looking at it from sides. There is an option to change the colour calibration and temperature on the smartphone for those who would like to tinker with it. 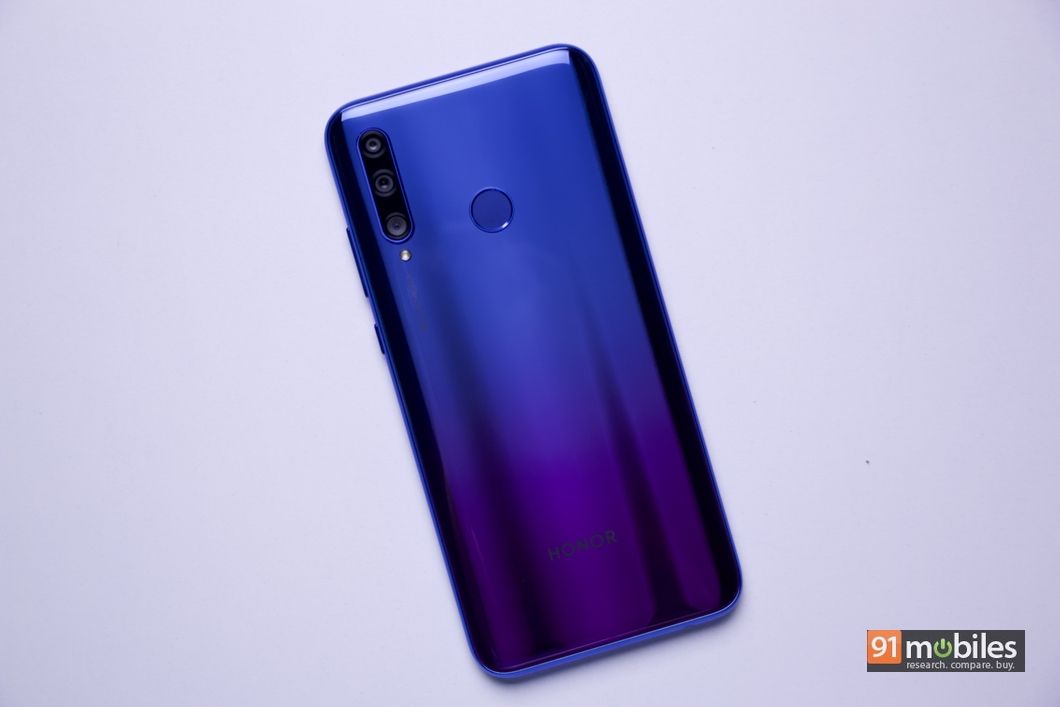 Handling the performance of the Honor 20i is the HiSilicon Kirin 710 octa-core processor. The 12nm chipset is backed by 4GB RAM and is able to handle pretty much everything I threw at it with ease. The animations were smooth and the handset jumped between various open apps in the background without any lag. Speaking of the animations, the 20i boots EMUI 9.0.1 based on Android 9 Pie. The proprietary interface has a fair share of bloatware with features like Digital balance (Honor’s take on Google’s Digital Wellbeing), smart assistance and more. There is 128GB storage onboard, of which the user gets around 116GB out of the box. The hybrid slot can take up to 512GB microSD cards. A 3,400mAh battery with 10W fast charge support fuels the handset. 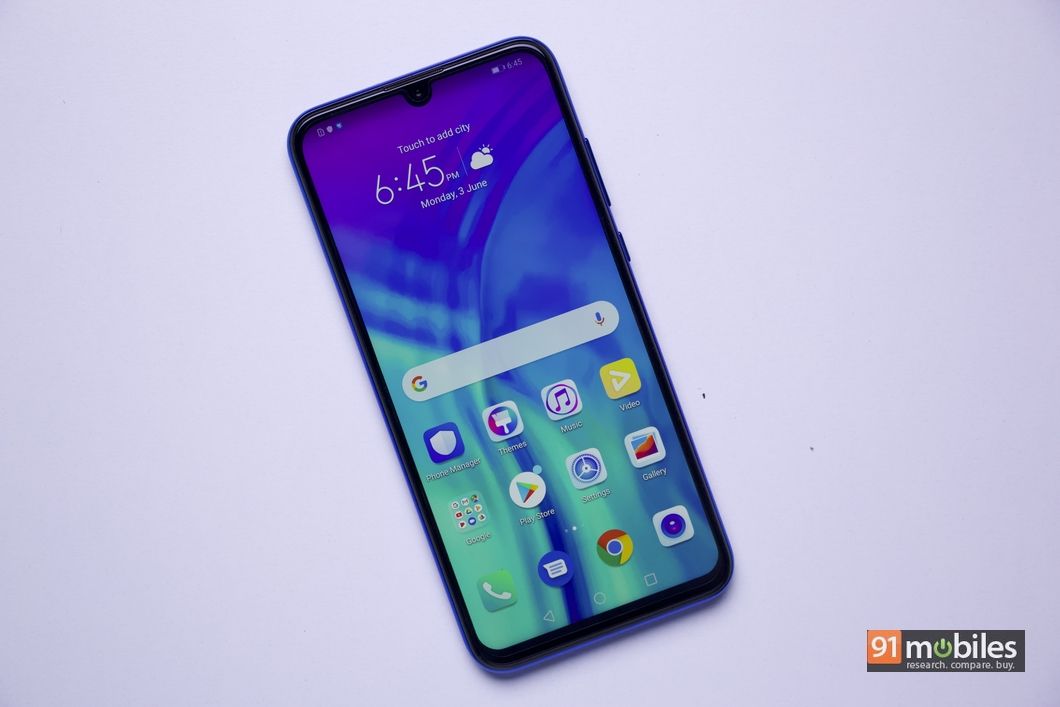 In the imaging department, the Honor 20i features a 24MP primary sensor with an f/1.8 aperture, an 8MP f/2.4 ultra-wide angle camera and a 2MP f/2.4 depth unit on the back. For selfies, you get a 32MP shooter inside the waterdrop notch on the front. The camera app offers a variety of modes such as portrait, night, aperture, pro, light painting, and HDR among others. The initial pictures shot in daylight and indoors were equally good. I was particularly impressed by the bokeh capability and the well-detailed selfies. Pro tip: use the aperture mode to shoot bokeh on objects and portrait mode for human subjects.

The Honor 20i comes across as a loaded mid-ranger. However, not only it goes against other capable mid-range options such as the Samsung Galaxy A50 (review), but also the likes of the forthcoming Redmi K20 and K20 Pro. We’ll surely be testing out the smartphone over the coming days to gauge whether it’s a worthy buy, so keep watching this space.