91mobiles.com
Home News Honor 8A set to launch in China on January 8th

Earlier today, Honor uploaded a teaser on its Weibo account revealing the launch date of the upcoming Honor 8A. The smartphone will be unveiled in China on January 8th as per the poster. That’s not all as the teaser image reveals that the successor to the Honor 7A will feature an octa-core chipset, a teardrop notch on the fascia and 64GB of built-in storage. 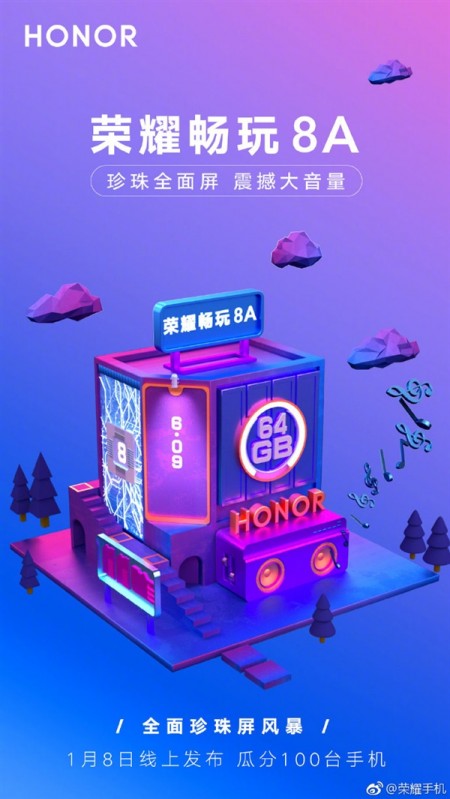 Recently three devices were certified with TENAA, which were later linked with the Honor 8A. Going by that certification, the forthcoming smartphone will offer a 6.08-inch LCD display with a resolution of 720 x 1,560 pixels, and an octa-core processor with a clock speed of 2.2GHz. The device is said to boot Android 9 Pie out of the box.

Apart from this, the certification also mentioned the camera specifications, which includes a 13MP primary snapper and an 8MP selfie shooter. However, the TENAA listing suggested the lack of a fingerprint reader, which indicates that the phone will come with the face unlock technology. The battery is expected to be a 2,920mAh unit. As far as weight and dimensions are concerned, the website mentions that the Honor 8A will measure 156.28 x 73.5 x 8mm, and tip the scale at 150g. The device will come in Black, Blue, Gold and Red colours.

Considering the launch is next week, we won’t have to wait for long to find if the Honor 8A indeed come with these specs. It also remains to be seen if the device lands on our shores, though we can expect it in the Indian market considering its predecessor was also launched.