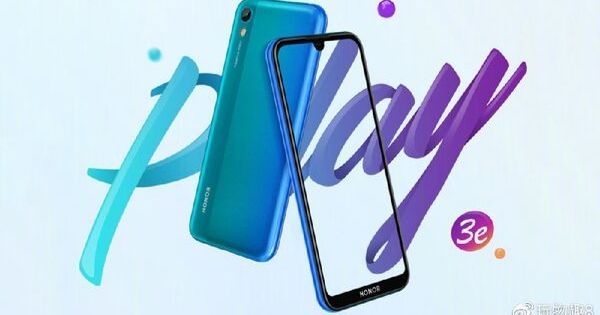 “The Honor Play 3e comes with a 5.71-inch HD+ display and is powered by the MediaTek Helio P22 SoC”

Honor Play 3e budget smartphone has been launched in China. The Play 3e is a watered-down version of the Honor Play 3 that was announced earlier this month. The phone offers a smaller display compared to the Play 3 and a single rear camera. The Honor Play 3 featured a triple-rear camera setup and a large 6.39-inch HD+ display. Honor is also offering the new Play 3e at a very affordable starting price. As of now, the phone has only been launched in China and we have no clue about international availability.

The Honor Play 3e comes with a 5.71-inch display with an HD+ resolution and a waterdrop notch. The phone is powered by the MediaTek Helio P22 processor, which is coupled with up to 3GB RAM and 64GB storage. A microSD card slot is available for storage expansion and it supports up to 512GB.

Honor has really toned down the specifications on the Play 3e when compared to the Play 3. While the Honor Play 3 got a triple-rear camera setup, the Play 3e comes with a single 13-megapixel rear camera with an f/1.8 aperture. For selfies, a 5-megapixel selfie camera is available upfront. The device is equipped with a 3,020mAh battery and runs Android 9.0 Pie-based EMUI 9.1 out of the box.

The phone offers features such as Dual-SIM with 4G VoLTE, Bluetooth 4.2, a 3.5mm headphone jack, a micro-USB port for charging, Wi-Fi, GPS, and GLONASS. It’s really just an affordable budget smartphone that should easily get you through a day.