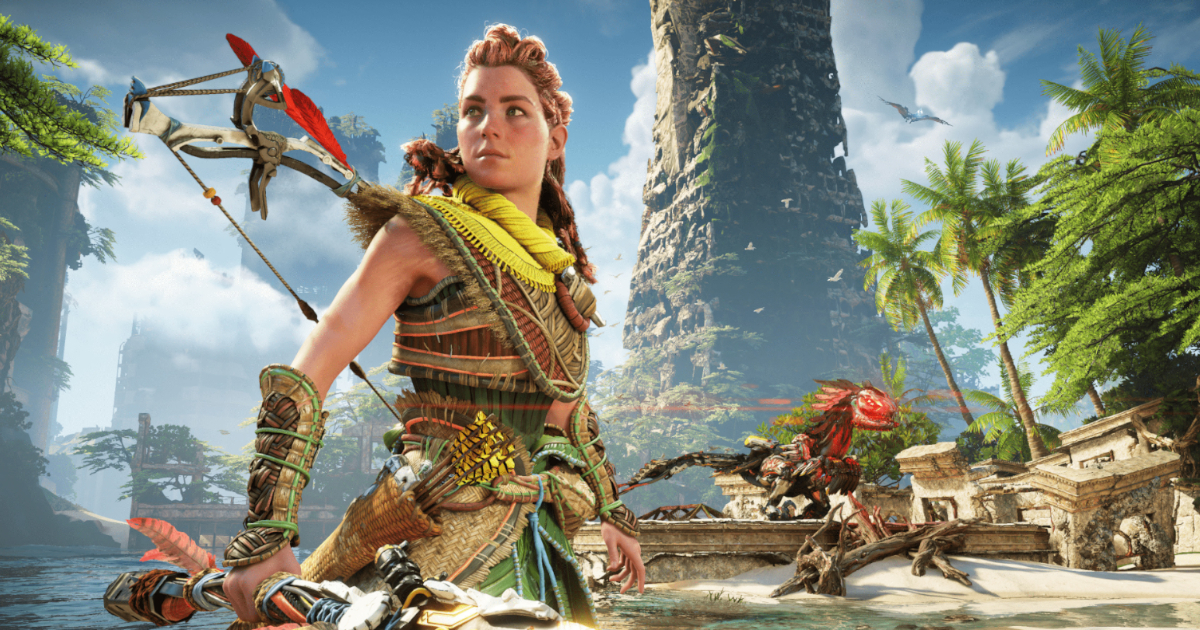 It’s been exactly five years since Guerrilla Games took a gamble with an open-world adventure that became a PlayStation darling on the PlayStation 4. Now, the sequel looks to broaden the Horizons of this Robo-dino franchise with more profound lore, fantastic gameplay and one of the most iconic characters from the PlayStation family. Horizon Forbidden West may just be a love letter to fans of open-world games who have been craving an adventure that respects the players time and makes every activity meaningful in some way.

Like the previous game, Horizon Forbidden West is in a post-apocalyptic setting, albeit in a far bigger open world. The sequel builds and refines everything from the last game, like beautiful vistas, spine-chilling machines, detailed biomes and side stories that matter. In short, Horizon Forbidden West may just be a GOTY (Game of The Year) contender and the latest PlayStation 5/PlayStation 4 exclusive that is all set to be a blockbuster.

Horizon Forbidden West picks up six months after the first game’s events, but Aloy faces a far more significant challenge. In her travels, Aloy notices a Red Blight impinging the world and killing all food sources the world depends on. At the beginning of the game, the game lets players know that this Blight is killing any nearby wildlife and vegetation and will eventually encroach on human settlements. The collapse of the biosphere is also responsible for a superstorm that could adversely affect the biosphere and eventually lead to the extinction of all life on Earth. 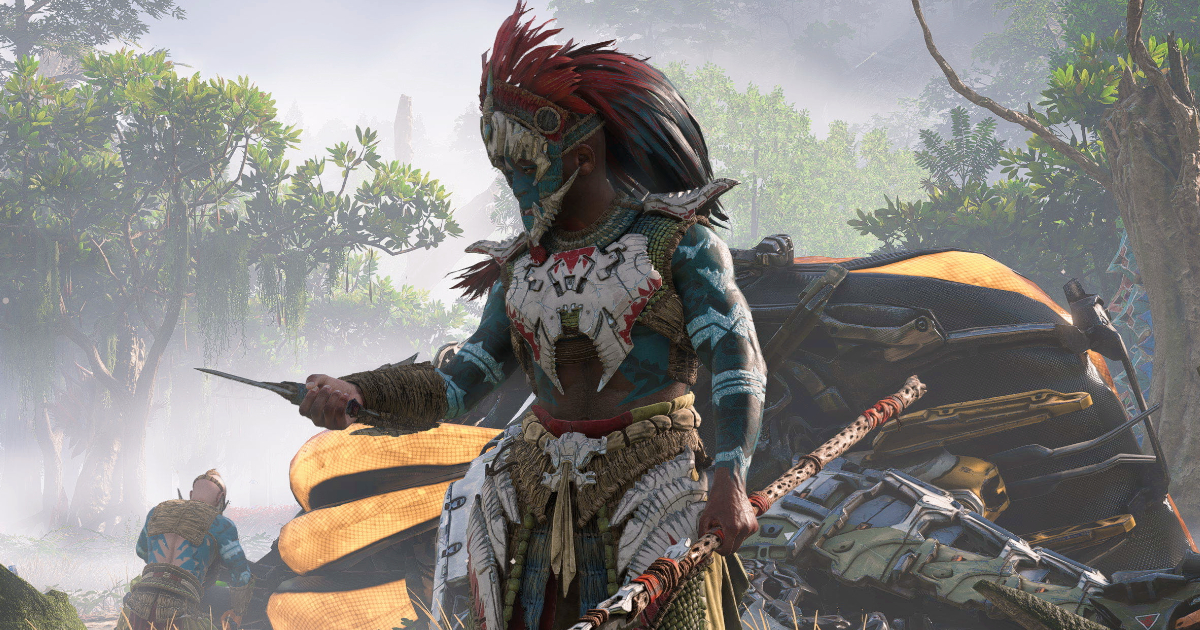 To find the cure of the Blight, Aloy takes a journey through the wilderness of the far west, looking for answers and essential artefacts that might help Aloy cure the Earth’s biosphere. Along this journey, Aloy is introduced to various tribes such as the Tenakth, Utaru, Oseram and many others that populate the world with settlements. Since Earth is in a primitive state due to the actions of the old ones, human society has been reduced to small sects that have their own set of practices and beliefs. I found it endearing that Aloy always interacted with each tribe respecting their beliefs and not in an apprehensive approach, even though she knew it wasn’t the whole truth deep inside.

For what it’s worth, Horizon Forbidden West‘s story has a satisfying payoff that poses more questions that need answering. The journey to the conclusion is still as mystifying as the previous title, and it was enough to keep me intrigued till the very end of the main story. Moreover, the same storytelling style has also been carried over to side missions and other activities. Every side story has some relation to the overarching storyline, keeping significant stakes in play no matter what action you end up doing. Due to this approach, Horizon Forbidden West has now set a benchmark for open-world adventures that other studios should take influence from. 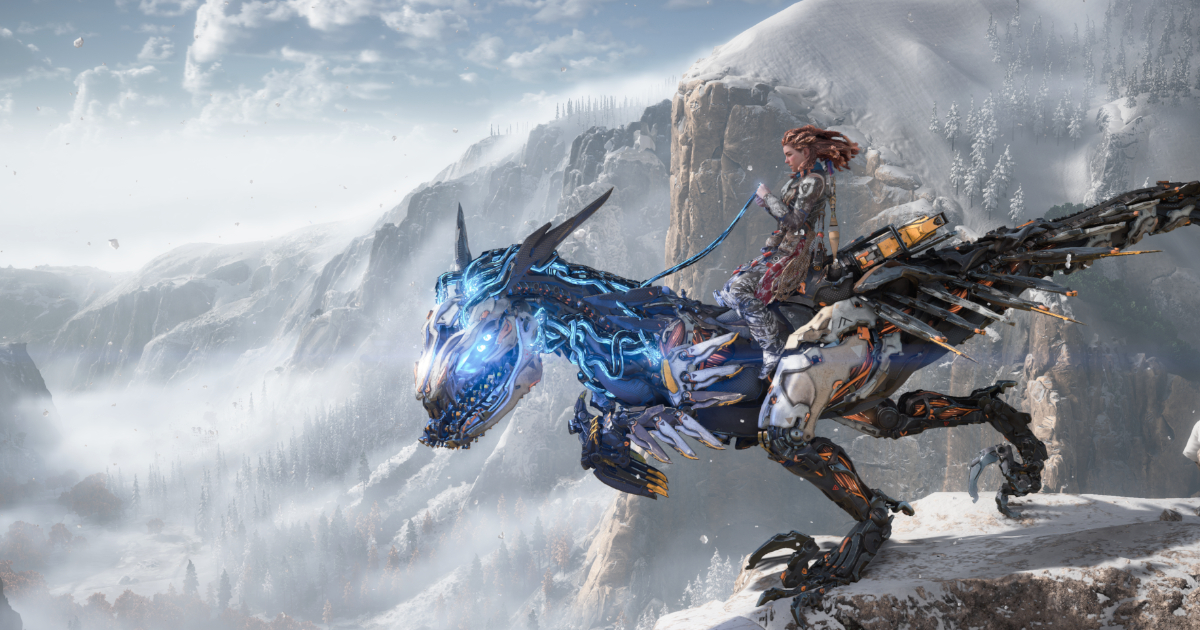 Unlike many bloated open-world games, Horizon Forbidden West‘s main story will take about 30 hours to complete, while the platinum trophy is attainable in about 60 hours for trophy hunters. Of course, these are rough estimates as it highly depends on how you play the game, but overall, Forbidden West will appeal to all kinds of players thanks to various activities you can do. There’s even a mini-game called “Machine Strike,” where players can use collectable pieces to play a board game. These collectable pieces also come in different rarities, which Aloy can get from taking down Robo-dinos and completing quests.

Guerrilla Games has improved almost every aspect of the gameplay in Horizon Forbidden West. The most significant improvement can be seen in traversal as most of the open-world can now be scaled by Aloy. Players can scan a mountain wall with Aloy’s Focus, and it will highlight all of the scalable crevices Aloy can use to climb. Aloy can now also use a glider (shieldwing) when jumping off high cliffs to avoid falling damage. However, special items like the glider or the diving mask are also widely used in solving puzzles and climbing sequences, making special gear essential for progression. 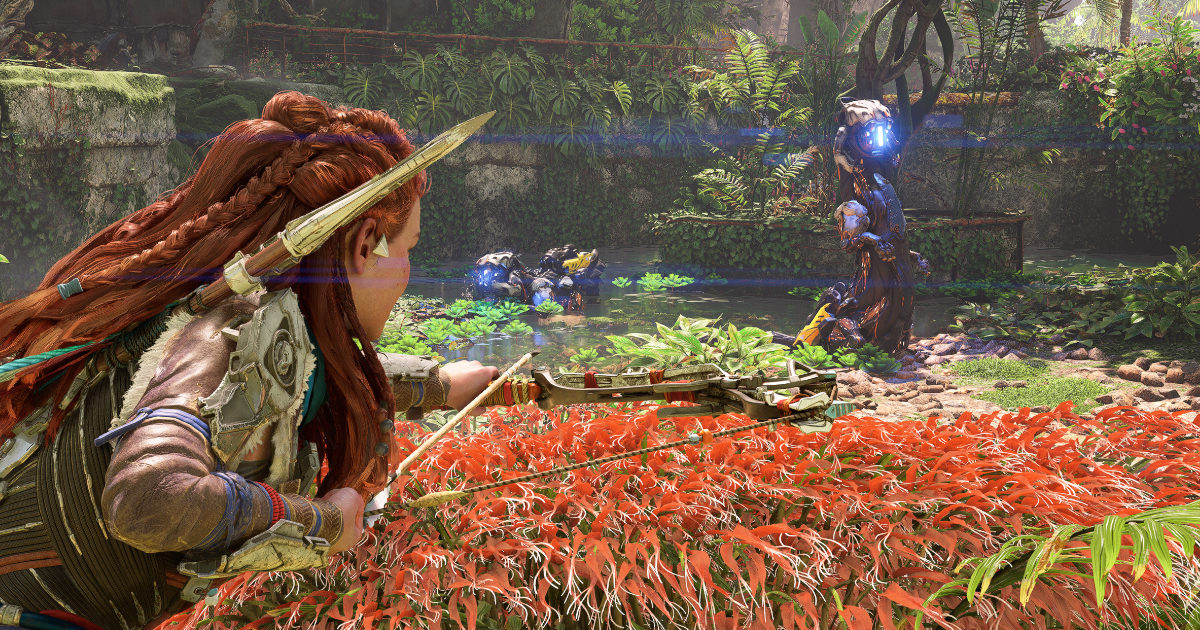 When it comes to combat, Guerrilla Games brought many quality-of-life improvements to combat mechanics that didn’t really need much tweaking in the first place. However, new abilities called ‘Valor Surges’ add a new layer that wasn’t present in the previous game. Players can unlock these special abilities from the skill tree and use them when the Valor points bar is full. Aloy can earn Valor by taking down enemies with headshots, silent strikes, or removing component parts. Once triggered, valour surges can range from giving Aloy damage and defence boosts or unleashing an electric shock on multiple enemies.

Horizon Forbidden West also adds numerous new machines that players will encounter in the open world. Some of the beasts look majestic from afar, while some look as they can tear you apart in a matter of seconds. The sheer variety of machine enemies present in the game keeps the combat fresh for many hours. There will be times players will face machine forms of armoured elephants, giant venomous snakes or nimble machines that can be taken down with a single strike. 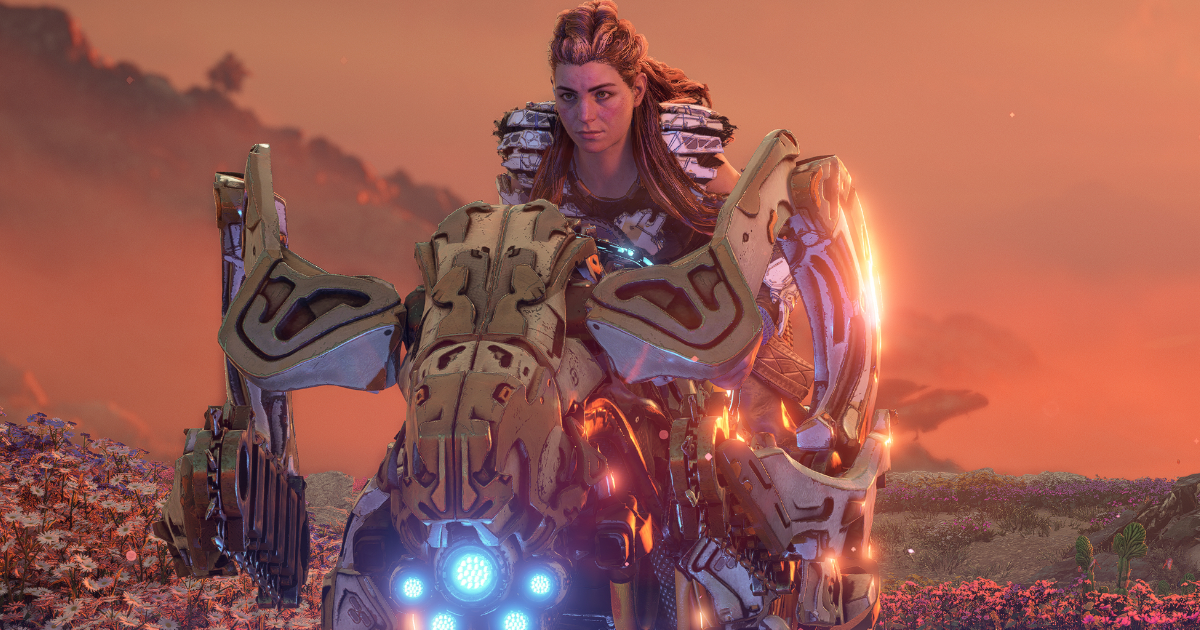 To make travelling in the world enjoyable, Horizon Forbidden West also has new machines players can ride. Some of these mounts are proficient at attacking other machines and help defend you in intense situations, while others make travelling around the world much faster. Like the last game, players will be required to clear Cauldrons to unlock most of these new ridable machines while some unlock as you progress the story.

Horizon Forbidden West is a sight to behold on the PlayStation 5 in both performance and resolution mode. While the game looks absolutely stunning in resolution mode, I preferred playing it in performance mode because it targeted 60 frames per second and made the combat feel far smoother. Forbidden West performs well and maintains 60 frames most of the time. Of course, there are dips during intense moments, but it never really hampered the overall experience. Most of my time spent was buttery smooth, however, if you prefer detailed graphics, you can always play the game in Quality mode, but with the performance capped at 30 frames per second. 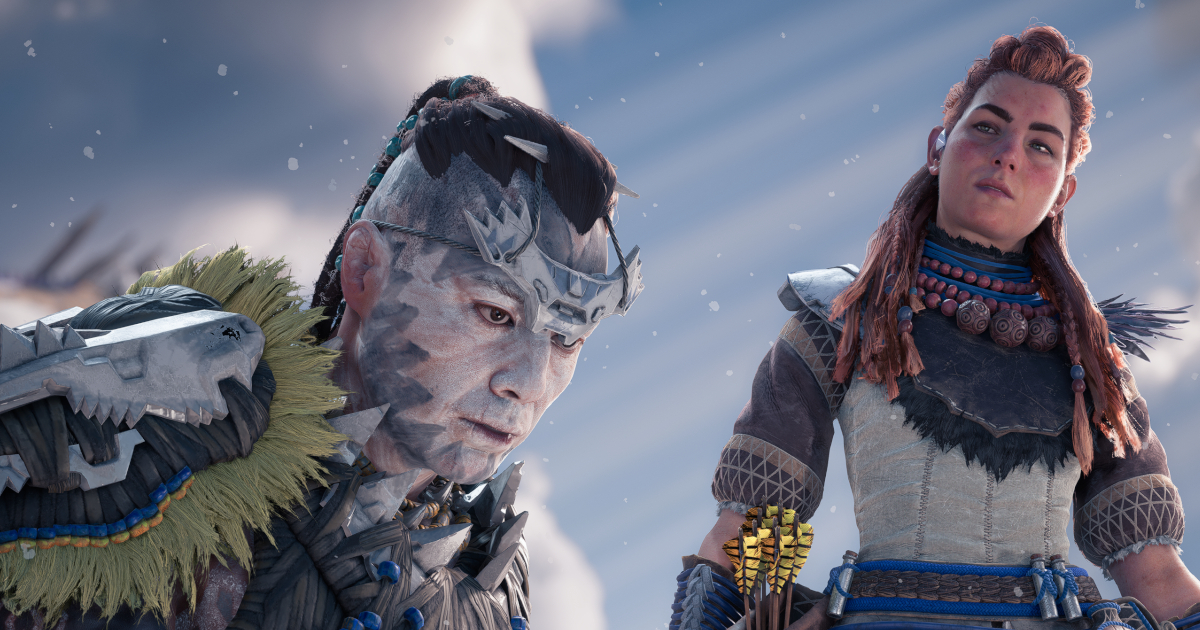 In terms of graphics, Guerrilla Games have crafted a vivid open-world playground for players to experience various biomes and vistas. From deserts to rainforests to beaches to snow-capped mountains, each biome offers unique attributes and picturesque vistas for players to encounter. The game provides a lot of variety here and can only be compared to other genre-defining games such as Red Dead Redemption 2. However, as much as the environment is beautiful, it was also quite terrifying to explore. I would often find a horde of robot-beasts around the corner that I could take down for metal shards and other valuable parts. 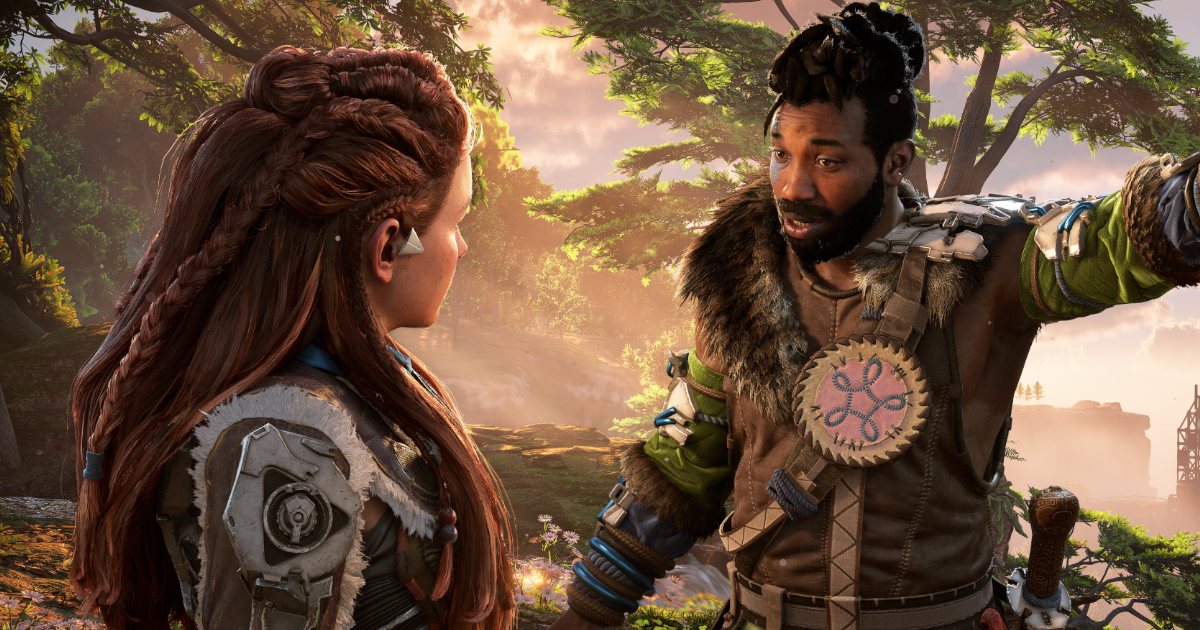 It’s worth pointing out that most of the cutscenes feel highly cinematic, crafted with impressive motion capture and background score. My major complaint from the first game was the inconsistent facial animations and awkward body movements that didn’t give off that PlayStation blockbuster vibe. However, in Horizon Forbidden West, Guerrilla Games has now motion-captured almost every conversation to keep the immersion intact throughout the game. This is even true for side missions, errands and other side activities. It shows that Guerrilla Games paid extra attention to visuals and is at par with other PlayStation exclusives like the Uncharted series.

However, not everything is perfect in the visual department, as I did notice some issues when it comes to lighting (even after an update). There were times I found the lighting to be a bit inconsistent in specific environments, especially if there was a lot of vegetation. While these inconsistencies weren’t common, they were noticeable whenever they occurred. Having said that, this minor lighting bug will probably be fixed in an upcoming update.

Another minor bug that I came across was not game-breaking but significant enough to worry about. Sometimes, when looting chests, Aloy would get stuck in an infinite animation loop, forcing me to load my last saved file. This happened to me only three times in the 32 hours I spent with the game. There’s a good chance this issue will also be resolved in the Day 1 patch, but I would recommend saving your progress frequently for now. 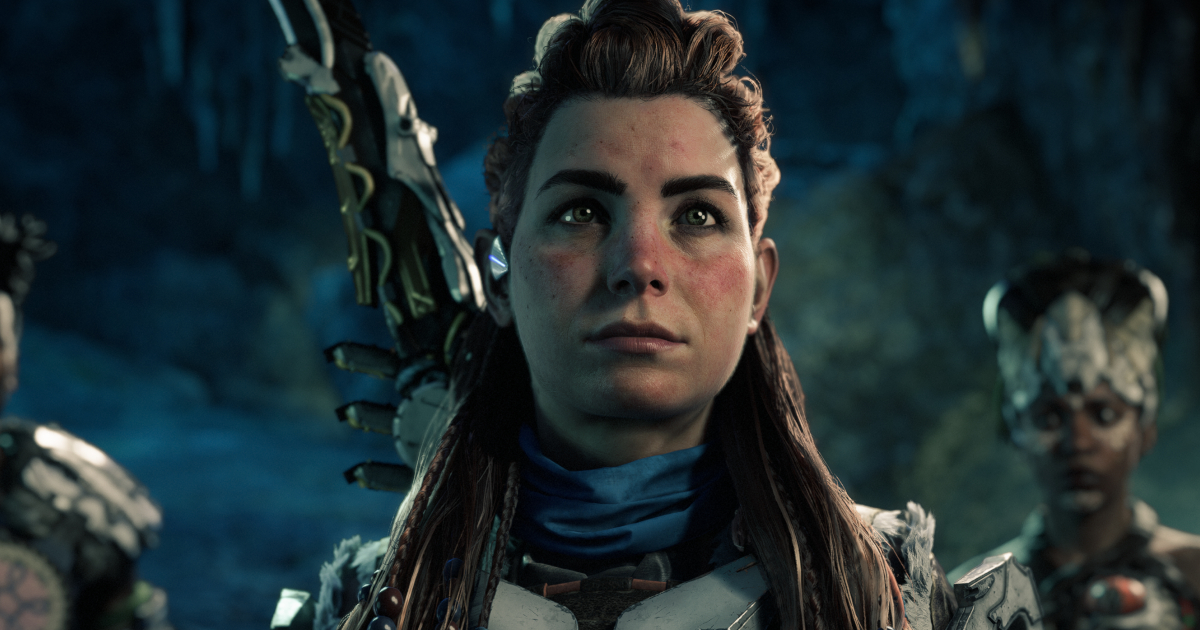