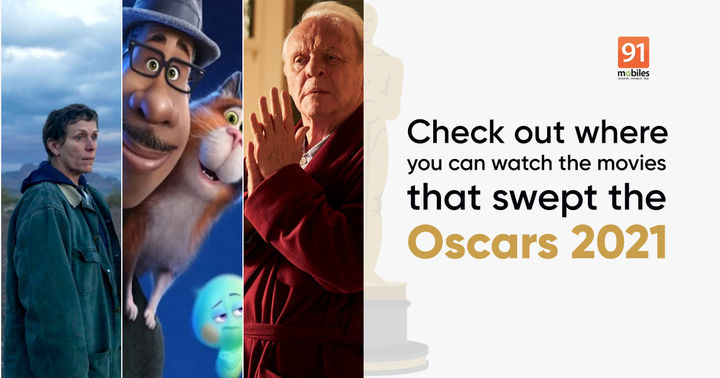 The winners of 93rd Academy Awards aka the Oscars 2021 are out! Taking home the award for the Best Picture category is Nomadland, while the 2021 Oscars for the Best Leading Actor and Best Leading Actress have been awarded to Anthony Hopkins for the movie The Father and Frances McDormand for Nomadland. Sound of Metal won an Oscar in the Sound category, whereas Christopher Nolan’s Tenet received the Best Visual Effects Oscar. The White Tiger starring Priyanka Chopra and Rajkumar Rao lost to The Father in the Best Adapted Screenplay category. If you are wondering how to watch Oscars 2021 movies online in India, fret not we have got you covered. Most of these movies, if not all, are available on the leading streaming platforms in the country for subscribers to watch online. Read on to find out where to watch online Oscars 2021 movies in India:

Where to watch Oscar 2021 movies online in India

Judas and the Black Messiah

While Nomadland is not available on any streaming platform in India yet, you can stream Judas and the Black Messiah on Apple TV. It’s an American biographical drama film about the betrayal of Fred Hampton, chairman of the Illinois chapter of the Black Panther Party in late-1960s Chicago, at the hands of William O’Neal, an FBI informant. The Oscar movie can be streamed now via Apple TV in India.

This American drama film is about a heavy-metal drummer whose life is thrown into freefall when he begins to lose his hearing. In addition to the sound, you’ll love this Oscar 2021 movie for its screenplay, editing, among other things.

Soul won the 2021 Oscar for Best Animated Feature Film for a reason. The movie follows a middle school band teacher who dreams of being a jazz musician and tries to escape the afterlife to do it. The Soul is a family watch, and the genre is comedy.

This Christopher Nolan’s masterpiece is a must-watch. The action thriller Tenet is based on the life of a secret agent who is given a single word as his weapon and sent to prevent the onset of World War III. He must travel through time and bend the laws of nature in order to be successful in his mission.

This Oscars 2021 winning movie is based on the play of the same name by August Wilson. The plot of the movie revolves around three real-life Black artists and legends: ‘Mother of the Blues’, August Wilson, and Chadwick Boseman. Tensions rise when trailblazing blues singer Ma Rainey and her band gather at a recording studio in Chicago in 1927.

The Trial of Chicago 7

The number of nominations speaks volumes for this movie. The Trial of Chicago 7 is based on the infamous 1969 trial of seven defendants charged by the federal government with conspiracy, and more.

One Night in Miami

One Night in Miami is a fictional account of a meeting between icons Muhammad Ali, Malcon X, Sam Cooke, and Jim Brown in a room at the Hampton House, celebrating Ali’s surprise title win over Sonny Liston. The Oscars 2021 nominative movie follows their roles in the Civil Rights movements and cultural upheaval in the 60s.

News of the World

It’s an American Western drama, based on the 2016 novel of the same name by Paulette Jiles. Starring Tom Hanks and Helena Zengel, the Oscars movie follows a Civil War veteran who must return a young girl who was taken in by the Kiowa as a little girl to her last remaining family.

The mockumentary comedy film directed by Jason Woliner features Sacha Baron Cohen as Borat. He travels to the US to deliver his 15-year-old daughter as a prodigious bride to the American regime to help Kazakhstan regain its lost pride. The Oscars movie is available on Amazon Prime Video in India.

Pieces of a Woman

Pieces of a Woman is based on the life of a young couple who are expecting their first child. The birth ends in unfathomable tragedy, leaving the woman grappling with the profound emotional fallout that fractured relationships with loved ones.

Based on the bestselling memoir by J.D. Vance, the Oscars 2021 movie Hillbilly Elegy is a modern exploration of the American dream and three generations of an Appalachian family as told by its youngest member, a Yale Law student forced to return to his hometown.

The White Tiger shows how a rich Indian family’s ambitious driver uses his wit and cunning to escape from poverty and rise to the top as an entrepreneur. The Oscars movie is the adaptation of the 2008 Booker Prize-winning fiction novel book with the same name by Aravind Adiga.

The Oscars 2021 nominated animated movie shows two teenage elf brothers, Ian and Barley Lightfoot, in a magical realm where technological advances have taken over. They are set out on an epic adventure to resurrect their late father for a day.

It’s a computer-animated musical fantasy film. Over the Moon is set on a life of an adventurous girl who builds a rocket ship to meet a mythical goddess on the moon. The Oscars movie can be streamed via Netflix in India.

The American war drama film directed, produced, and co-written by Spike Lee follows four African American vets who battle the forces of man and nature when they return to Vietnam seeking the remains of their fallen squad leader. Watch this epic Oscars 2021 movie on Netflix in India.

The One and Only Ivan