Home News The HTC One (M8) is finally here with a dual-lens camera, expected... 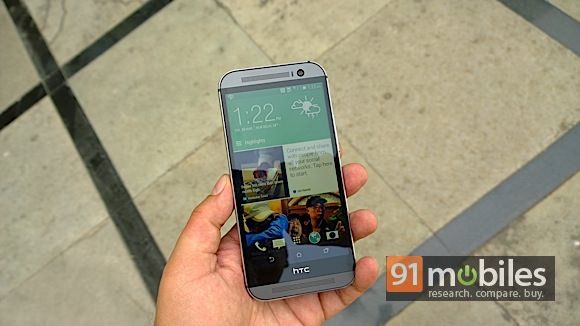 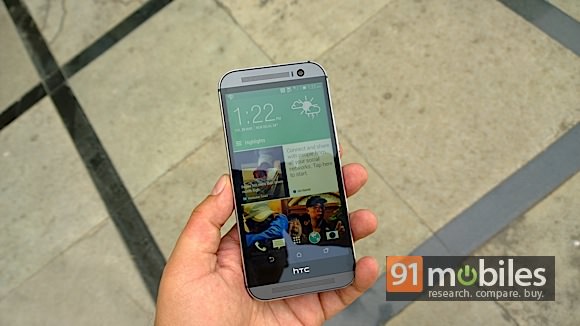 It’s been called the All New HTC One, HTC M8, HTC One 2014 and HTC One+, and that’s only the shortlist. Leakier than a leaky faucet, HTC’s latest flagship is finally here, and its official moniker is… the HTC One (M8). Yes, we’re disappointed too. Since the last year’s flagship was called the M7, the name could be rather sedate, but definitely better than HTC One 2. Nevertheless, the months of rumours, analysis and even sneaky hands-on videos are over, and we’re relieved that one of 2014’s most-awaited flagships is finally official. The HTC One (M8) has a killer spec sheet, most of which won’t come as a surprise if you’ve been following our ongoing coverage. Apart from the technical stuff, there are also some nifty gestures and software enhancements adding to its aura. Encased in a brushed aluminium, zero-gap, unibody frame, the new HTC One brings back the curves, giving the device a more natural grip. It flaunts a 5-inch full HD display, a popular size among big-screen smartphone lovers. For protection, there’s also a layer of Corning Gorilla Glass 3. Powering the show is Qualcomm’s latest quad-core Snapdragon 801 chipset, clocked at 2.5GHz. Adding to that, it’s got 2GB of RAM and an Adreno 330 graphics processor. As expected, the HTC One (M8) runs the latest version of Android, KitKat 4.4.2, with HTC’s Sense 6.0 UI on top. The flagship’s camera is one of the highlights of the device. It gets a dual-lens setup at the rear, complete with UltraPixel credentials and a True Tone dual-LED flash. Although offering only a 4MP resolution, the camera’s 1/3-inch sensor captures more light thanks to a large 2µm pixel size. The UltraPixel camera also offers a large f/2.0 aperture and HDR video recording. The duo camera setup allows users to adjust the focus of an image after taking a shot, similar to Nokia’s Refocus app. In the front, there’s a 5MP shooter with a wide-angle lens, and a countdown mode to help you capture the perfect selfie. 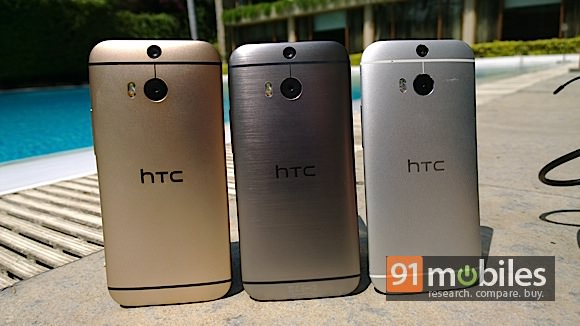 For music lovers, the HTC One (M8) features dual front stereo speakers with HTC BoomSound technology, aided by dedicated amplifiers and Beats Audio sound enhancement. The phone offers 16 or 32GB of internal storage, expandable up to 128GB with a microSD card slot. It also supports USB OTG to connect an external flash drive. Connectivity features include Wi-Fi, Wi-Fi Direct, Bluetooth 4.0, NFC, Infrared, USB and LTE. And before you ask, the HTC One (M8) does support Indian LTE bands. Hooray! Gestures are the new must-have feature on flagships, and the HTC One didn’t want to be left behind. The Motion Launch feature allows users to wake up the phone by double tapping the display. Users can also pick up the phone in landscape mode and press the volume button to launch the camera. To answer a call, you can place the ringing smartphone near your ear. BlinkFeed can be easily accessed when the screen is asleep by simply swiping to the right. The phone will also come with a variety of cases, including a Dot View case which will display alarms, notifications, battery and weather. It will be available in three colours – Gunmetal Gray, Glacial Silver and Amber Gold. The HTC One (M8) is slated to arrive in India around the third week of April. We’ll keep you posted on pricing details once we have them. Until then, check out our first impressions of the device.
Show Full Article
ShareTweetShare
Share