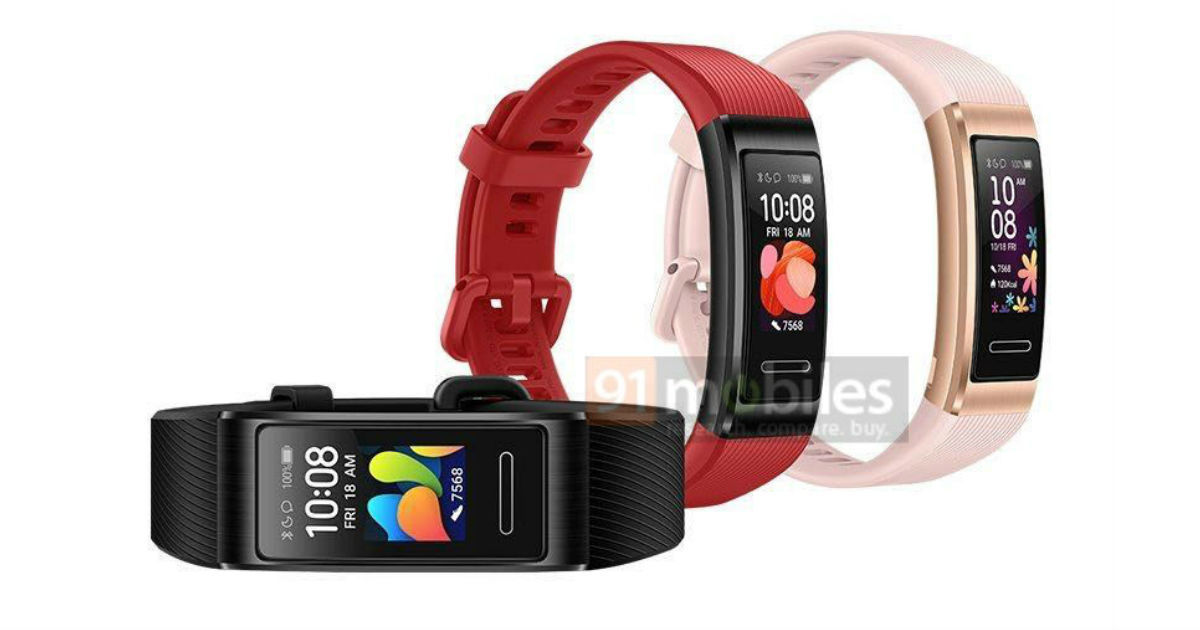 Huawei is gearing up for the launch of a new fitness band called Huawei Band 4 Pro. Reliable sources have shared an exclusive image of the Huawei Band 4 Pro with 91mobiles, showing it will look quite similar to its predecessor Huawei Band 3 Pro. The Band 3 Pro was introduced earlier this year and it was the first in the lineup to pack colour AMOLED display. The Huawei Band 4 Pro is likely to have similar form factor, accompanied by silicon strap and power adaptor to charge the band. This design is in line with the patent design for the wearable that surfaced online back in September.

As can be seen in the image above, the Huawei Band 4 Pro will have a colour display, with new wallpapers and a touch-sensitive button. The screen is not entirely bezel-less and there’s a broad chin, which looks similar to the Band 3 Pro. Apart from black, the Huawei Band 4 Pro may come in new colour options: including red and gold. The straps will, of course, be interchangeable and have multiple adjustment holes to snugly fit on the user’s wrist.

As for the specifications of Huawei Band 4 Pro, they remain unknown at the moment. However, going by the previous leaks and rumours, the Band 4 Pro will reportedly feature 10 new watch faces that will display the information in different layouts. The wearable is expected to sport an AMOLED panel, a built-in heart rate sensor, and SpO2 meter to inform you of the amount of oxygen in the blood. Rumours are rife that the Band 4 Pro may ditch the proprietor charging connector for a USB port that stays concealed within the strap. The connector can directly be plugged into any wall charger with a USB Type-A port.

The Huawei Band 3 Pro, meanwhile, ships with a 0.95-inch HD AMOLED colour touchscreen display, GPS, and TruSeen 3.0 that is said to accurately detect the heart rate. The wearable features 5ATM waterproof level and a 100mAh battery that is rated to deliver 17 days of regular usage, eight hours of GPS active time, and up to a month of standby time.