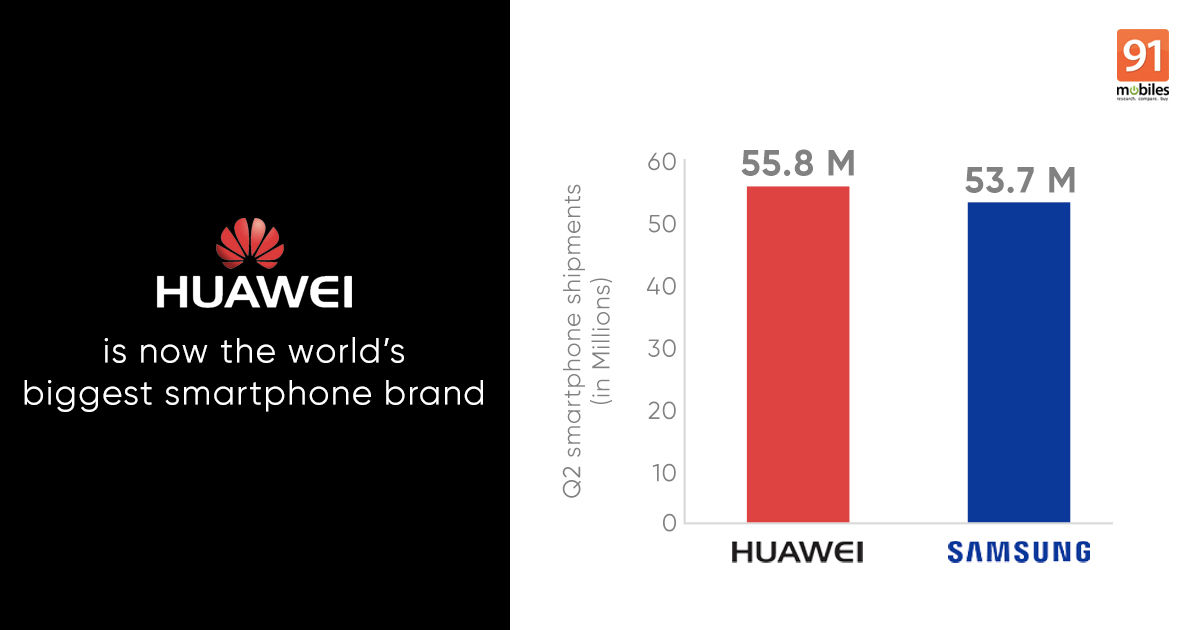 According to a new report from Canalys, Huawei shipped more smartphones than any other brand worldwide in Q2 2020 and was the world’s biggest smartphone maker in shipment terms during the period. While the pandemic has affected Samsung and Apple shipments worldwide, Huawei has been able to ship more units than its rivals on the back of the Chinese market. As per Canalys, Huawei shipments – which stood at 55.8 million – grew by 8 percent y-o-y in China, which now accounts for as much as 72 percent of the brand’s shipments, up from 64 percent in Q2 2019. On the other hand, Huawei’s overall shipments have dipped 5 percent compared to the same quarter last year.

As for Samsung, it shipped 53.7 million units in Q2 2020 and saw shipments dip as much as 30 percent worldwide. It doesn’t have much of a market in China. While the Chinese market recovered in Q2 after suffering economic shutdowns in the first quarter, Samsung’s major markets – such as India – suffered lockdowns and quarantines that put to rest much of the economic activities, including smartphone sales.

Huawei, on the other hand, has suffered a huge setback in the global market in the last year as its access to Google Mobile Services on Android was cut off due to US sanctions. While new Huawei phones could still run Android, they will not have Google apps such as Play Store. It has tried to give customers access to popular Android apps such as Facebook, WhatsApp, etc via its own AppGallery and third-party app stores but success has been rather limited. Before it was cut off from Android in 2019, Huawei was on track to become the world’s biggest smartphone brand.

“Our business has demonstrated exceptional resilience in these difficult times. Amidst a period of unprecedented global economic slowdown and challenges, we’ve continued to grow and further our leadership position by providing innovative products and experience to consumers,” Huawei said.

Canalys senior analyst, Ben Stanton said if it weren’t for COVID-19, Huawei surpassing Samsung wouldn’t have happened. “Huawei has taken full advantage of the Chinese economic recovery to reignite its smartphone business,” added the analyst. Despite the superior hardware, Huawei phones are now less appealing to the mass since they are blocked from using Google Services, which is a big deal-breaker for most.

Moreover, things may not be as great for Huawei going forward as the rest of the world has started ending lockdowns, meaning Samsung shipments will bounce back once again. Samsung is set to launch its flagship Galaxy Note 20 and Galaxy Z Fold 2 smartphones in August, which should help it boost sales worldwide. Similarly, Apple will unveil the iPhone 12 series in September, which is expected to be a big hit in all major markets, especially China.