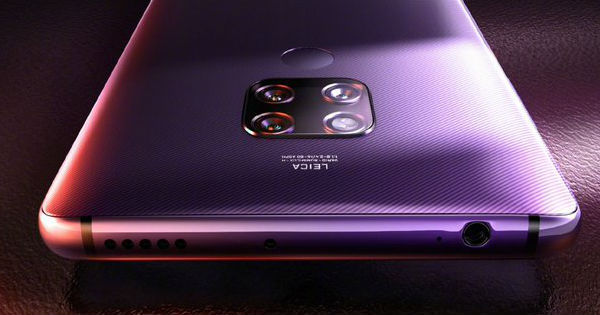 Huawei Mate 30 series is tipped to go official on September 19th, and while we wait for the launch, leaks and rumours about the handsets continue to hit the news. Now, a couple of leaked live images showoff the complete front panel, revealing the camera and under-the display fingerprint sensor module of the Huawei Mate 30. These also suggest the upcoming flagship would sport a smaller notch and it looks like the front will be equipped with dual snappers for selfies and video chats. This should also improve the camera performance of the Mate 30. Huawei is also said to be upgrading the facial recognition system for security.

Furthermore, unlike the dual-edged display seen on the Mate 30 Pro live images, the standard Mate 30 might embrace a flat-screen with slim bezels and a sizeable chin below the display. It’s possible the Mate 30 may stick to a 60Hz refresh rate, while Mate 30 Pro will embrace 90Hz panel, in-line with the flagship smartphone expectations. The Huawei Mate 30 will be powered by the in-house Kirin 990 SoC with 5G modem and expected to pack a 6.5-inch display with Full HD+ pixels resolution. Both the phones should run on Android 9.0 Pie with EMUI 9.1 skin on top.

On the other hand, the Huawei Mate 30 Pro is expected to feature a tall 6.7-inch OLED panel with an ultrasonic in-display fingerprint scanner. Alleged images of the handsets’ battery cells claim the Huawei Mate 30 will house 4,200mAh unit, while the Pro model will boast of 4,500mAh battery. Speculations are rife that the Huawei Mate 30 series would support whopping 55W wired charging and 25W wireless charging support. Both the phone should house at least triple rear camera setup with Leica lenses. We should know more details in the next few weeks.