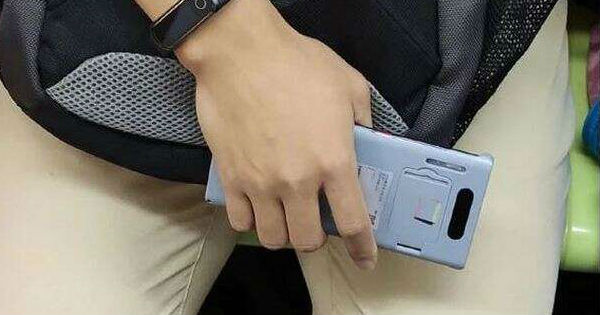 “The Huawei Mate 30 Pro will be upcoming flagship offering from the brand, expected to be unveiled next month”

Huawei Mate 30 Pro’s purported live images have been leaked yet again. The images reveal both the front and back panel of the handset covered with a case to conceal its identity. The fascia of the Mate 30 Pro can be seen with a curved edge display, which is in line with the previously leaked images. Also, speculations are that both Huawei Mate 30 and Mate 30 Pro will come with dual-curved edge design, just like we have seen on the Samsung Galaxy flagships. While the case does a good part hiding the notch, it’s believed that the handset could come with a wide cut-out atop the panel that’ll feature selfie camera and 3D face unlock.

A photo of the rear side of the Mate 30 Pro, although it doesn’t reveal much, shows a long LED strip and some other sensors alongside the camera module that seem to be hidden by the case. Since this is our first real shot of the handset’s back panel, there isn’t much we know. However, a leaked image of the handset’s alleged case a few days ago revealed that the LED flash inside the round-shaped camera module that also houses three lenses.

While Huawei is yet to reveal the launch date of the Mate 30 series, a report suggests that the handsets could be unveiled on September 19th at a launch event in Munich, Germany. It also reveals that at the same time as the unveiling in Europe, Huawei could host an event in Shanghai, China to present the Mate 30 Pro, as well as the Mate 30 smartphone.

The Huawei Mate 30 Pro is expected to feature a tall 6.7-inch OLED panel with an ultrasonic in-display fingerprint scanner, which is likely to be similar to Samsung Galaxy S10 and Galaxy Note 10 smartphones. Under its hood, the Mate 30 Pro could rock the successor of Kirin 980 SoC — Kirin 985 mobile platform, and a 4,200mAh battery with 55W fast charging support. For photography, there could be triple rear cameras, with a setup of 40-megapixel + 40-megapixel + 8-megapixel sensor configuration.