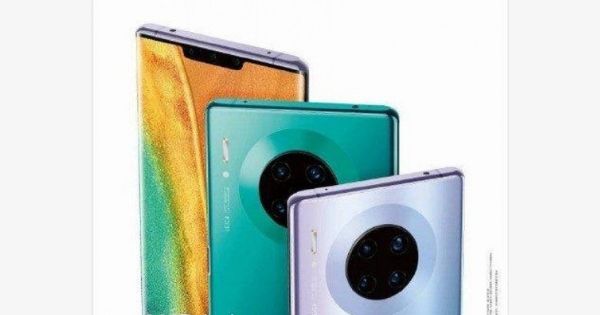 Huawei will be unveiling its latest flagship Mate 30 series on September 19th. There has been no shortage of leaks and rumours regarding the upcoming smartphones. We have seen renders, real-life leaks, and more. Some leaks suggested that the phone will have a square-shaped rear camera setup, similar to the Mate 20 series. However, other reports claimed that the Mate 30 and Mate 30 Pro will come with a circular camera setup at the back. The latest leak, a promotional image, shows both the rear and the front of the Mate 30 Pro.

If the leaked promo image is real, then it confirms that the Mate 30 Pro will come with the circular rear camera setup. The image was posted by SlashLeaks and it looks real. It shows a large circular quad-camera setup at the back of the phone with a slight protrusion. It also shows that there are four sensors, as opposed to the rumours suggesting that the phone would come with three rear cameras. Huawei Mate 30 Pro is expected to feature dual 40-megapixel sensors, an 8-megapixel telephoto unit, and a 3D TOF sensor.

You can see that the flash module and AF sensors are located on the top left corner of the phone. Recently, leaked images of the phone spotted in the wild also showed the LED flash and sensors in the same position. The image also shows the rumoured wide-notch at the front of the phone, which is expected to come with 3D Face recognition tech. However, another recent leak showed that the phone could feature dual selfie cameras.

The image even shows a headphone jack at the top of the phone. Another report suggests that Huawei could also announce Moto mods like accessories for the upcoming Mate 30 series. A Bluetooth SIG filing has revealed wireless accessories such as a gaming case, amplification case, waterproof case, and a health case with a heart-rate monitor, pulse oximeter, thermometer, blood pressure monitor, weight scale, and glucose monitor. We would have to wait until the launch day to find out if this is all true.