91mobiles.com
Home Bottom panel Huawei Mate X in pictures: taking us a step closer to a... 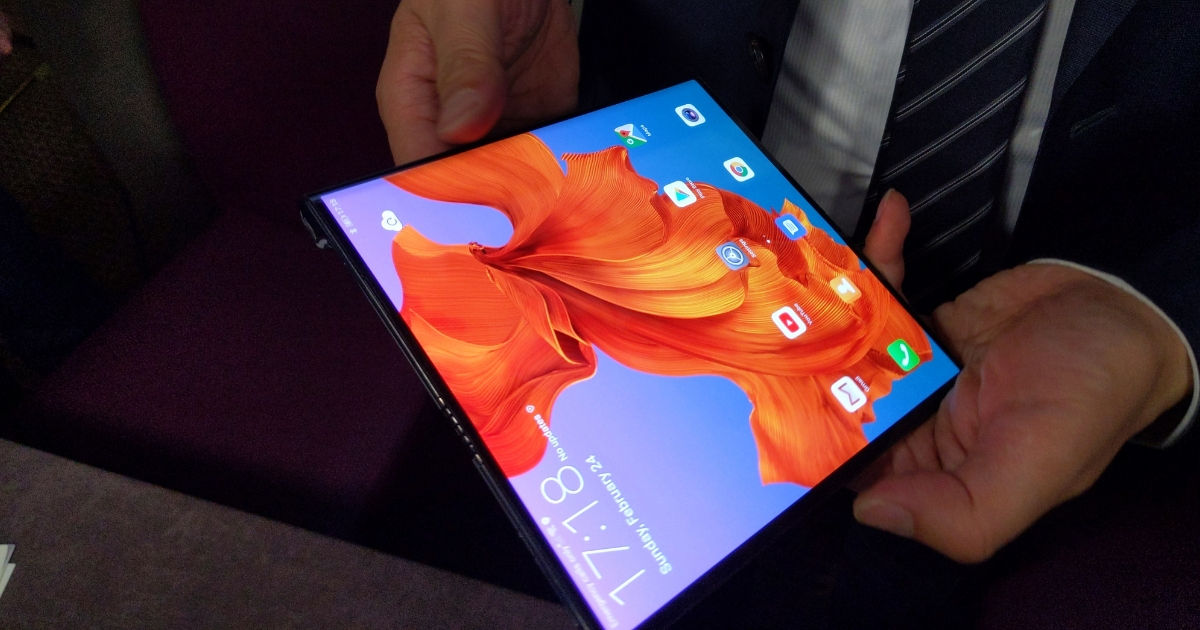 We’ve been hearing this statement quite a lot in the past couple of years. But 2019 is the year when we’ll see the foldable devices coming into existence. While Samsung pioneered this nascent segment earlier this week with the launch of the Galaxy Fold, the Chinese giant Huawei has also taken a stab at such a form factor as it took the stage to showcase the Mate X. It’s interesting to see that the brand has taken the opposite route as compared to what Samsung showed. While only time will tell which of these work well with consumers, for now, let’s take a closer look at the Huawei Mate X. 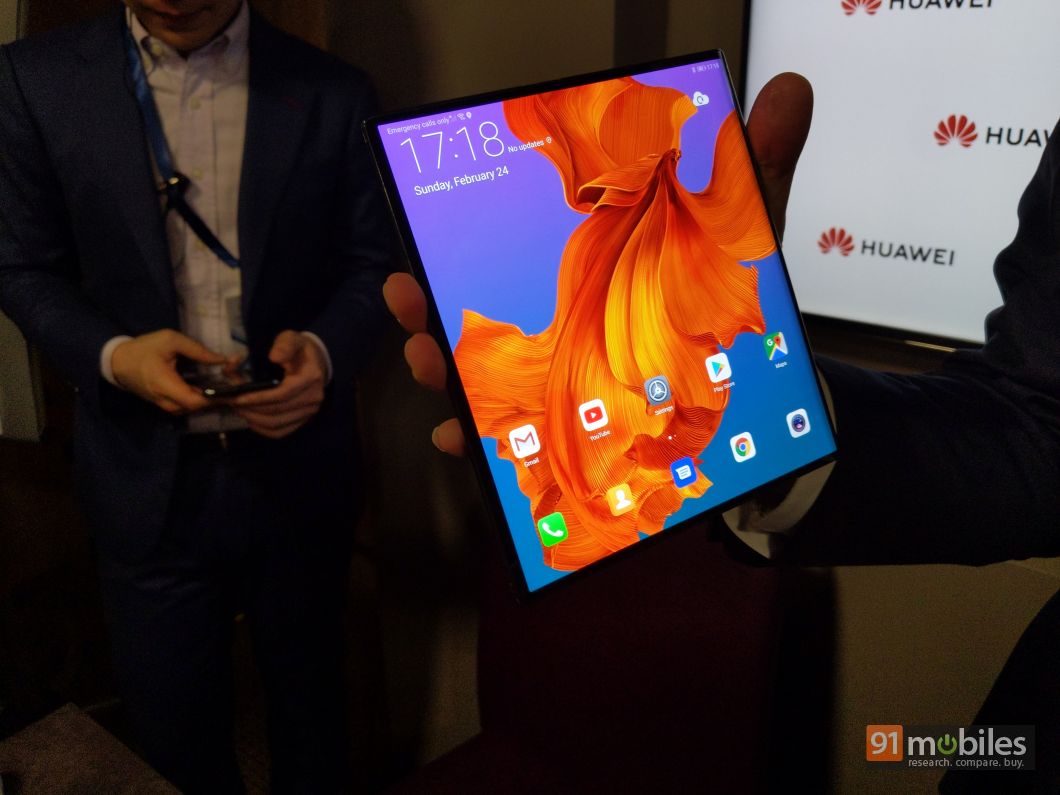 As mentioned above, Huawei has taken a different approach than Samsung to achieve a foldable form factor, so let’s discuss that first. Instead of a small screen on the outside with a smartphone-like design, which unfolds into a book-like form factor offering a larger screen, the Mate X features dual screens on both the sides, with the one on the front being the primary one. The main display measures 6.6-inches with a resolution of 1,148 x 2,480 pixels and an aspect ratio of 19.5:9, while the one on the rear measures 6.38-inches diagonally and bears 892 x 2,480 pixels (in 25:9 format). Open the device and what you get is almost bezel-less 8.71-inch display with a resolution of 2,200 x 2,480 pixels. There’s no cut-out for cameras and considering we using our smartphones in this manner only, the Mate X doesn’t need you to change your behaviour (looking at you, Samsung). 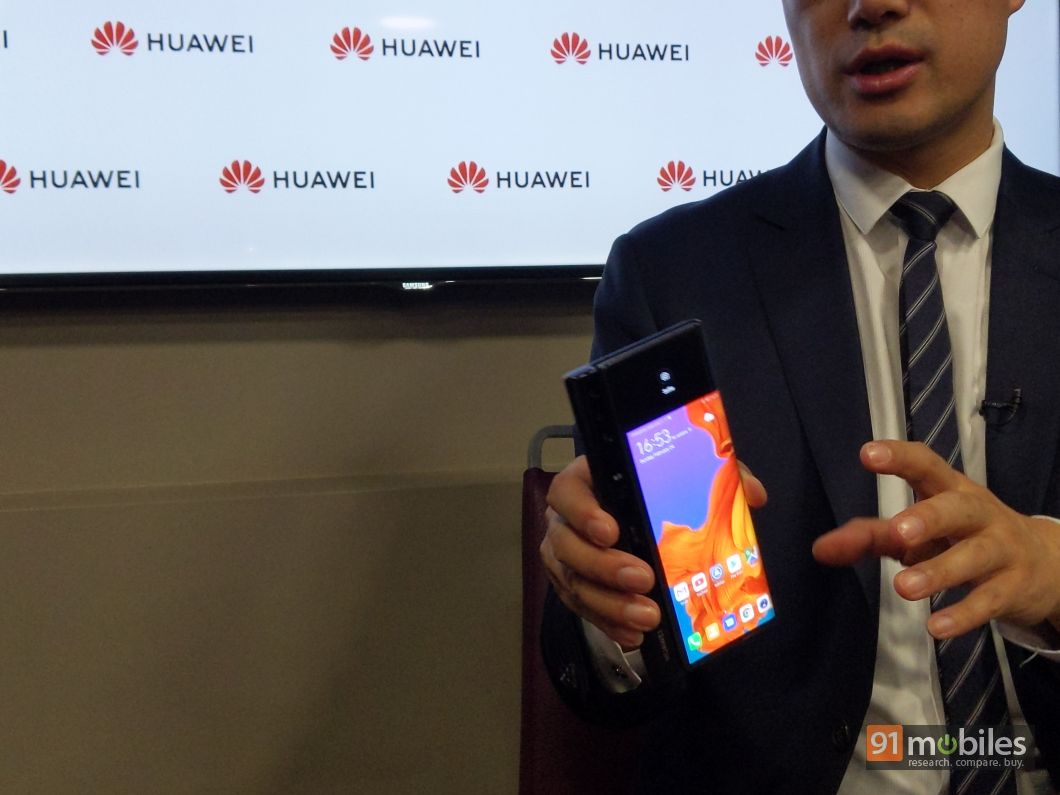 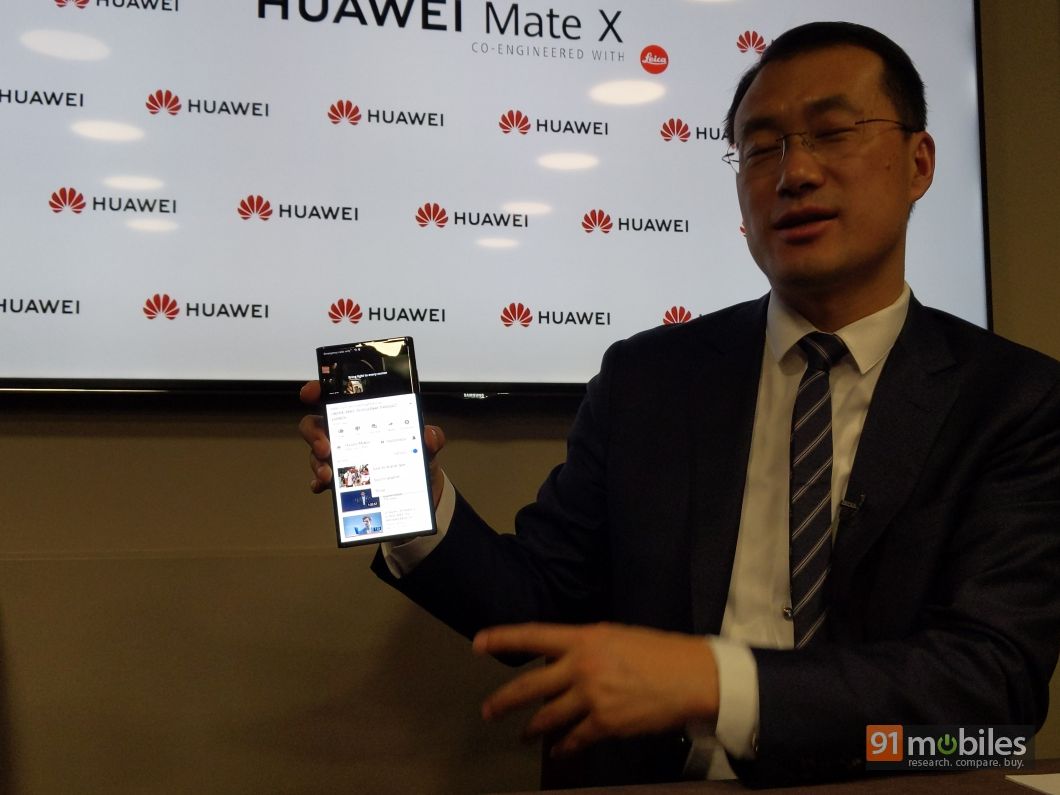 Huawei is also touting the fact that the Mate X is quite sleek at 5.4mm when unfolded. The hinge mechanism is being referred to as Falcon Wing and the company states it has filed over 100 patents for the same. While real-life usage will tell how durable the Mate X while folding and unfolding, it does look robust basis the executive demoing the phone (sadly, we couldn’t get a chance to check out the device in our hand). The brand has also shown its protective case, which is interesting considering the design challenge. 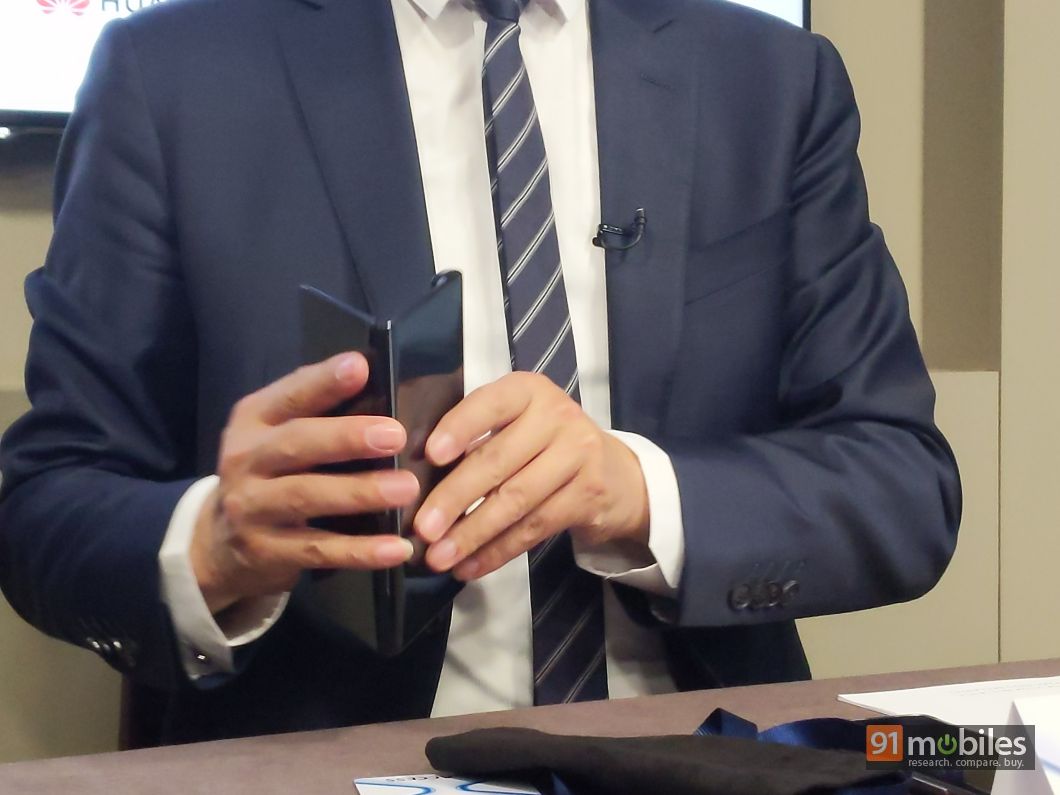 Worth noting that on the Huawei Mate X, there’s a lock that keeps the displays on attached, and upon releasing, you bring the tablet mode. I also think, it’s clever to place all the cameras on the rear. The Mate X has been equipped with Leica-branded 40MP (Wide Angle Lens) + 16MP (Ultra Wide Angle Lens) + 8MP (Telephoto) setup and you can use the same setup for capturing selfies too. Interestingly, like the Vivo NEX Dual Display (first impressions), only one of the displays is active, but while capturing photos you can enable the secondary screen too, to show the person how they’re looking. 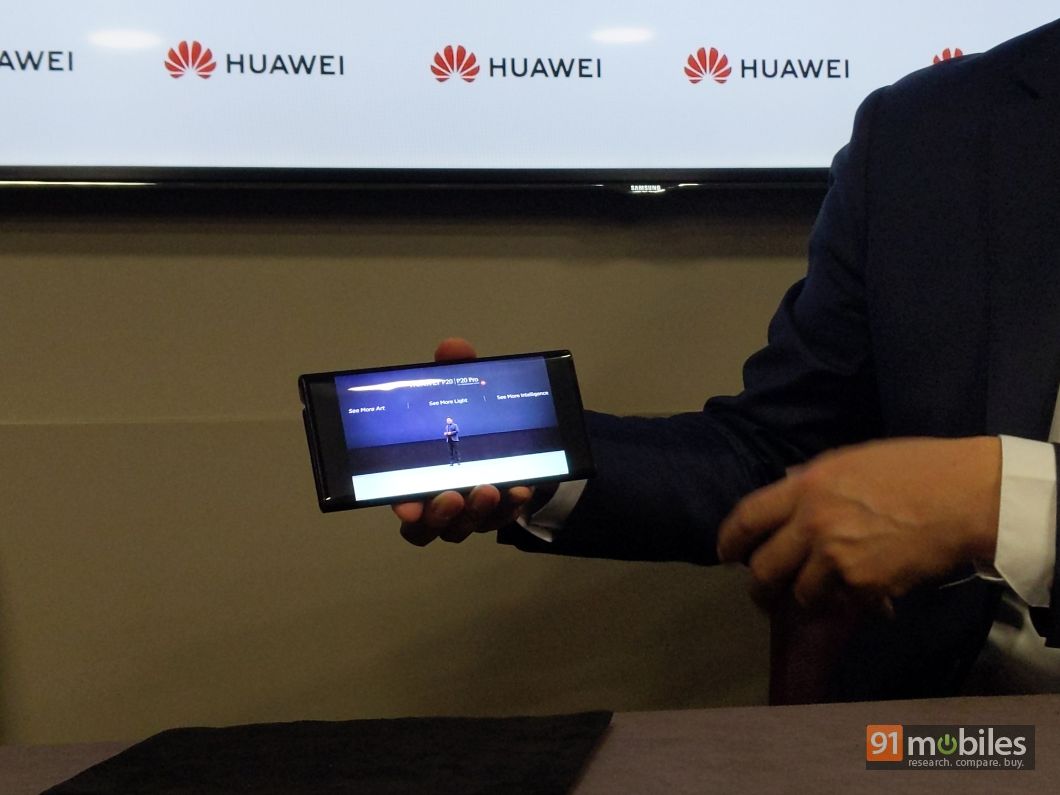 Hailed as the “World’s fastest 5G foldable phone“, the Mate X comes with Android 9.0 Pie, which is layered with EMUI skin on top. Basis the demo by the executive, the interface adapts seamlessly for the normal display (which switches to the back one if you hold the device in the other direction), and even when you open it to enjoy the bigger screen. However, there are a lot of questions as to how different apps will work in so many different aspect ratios. 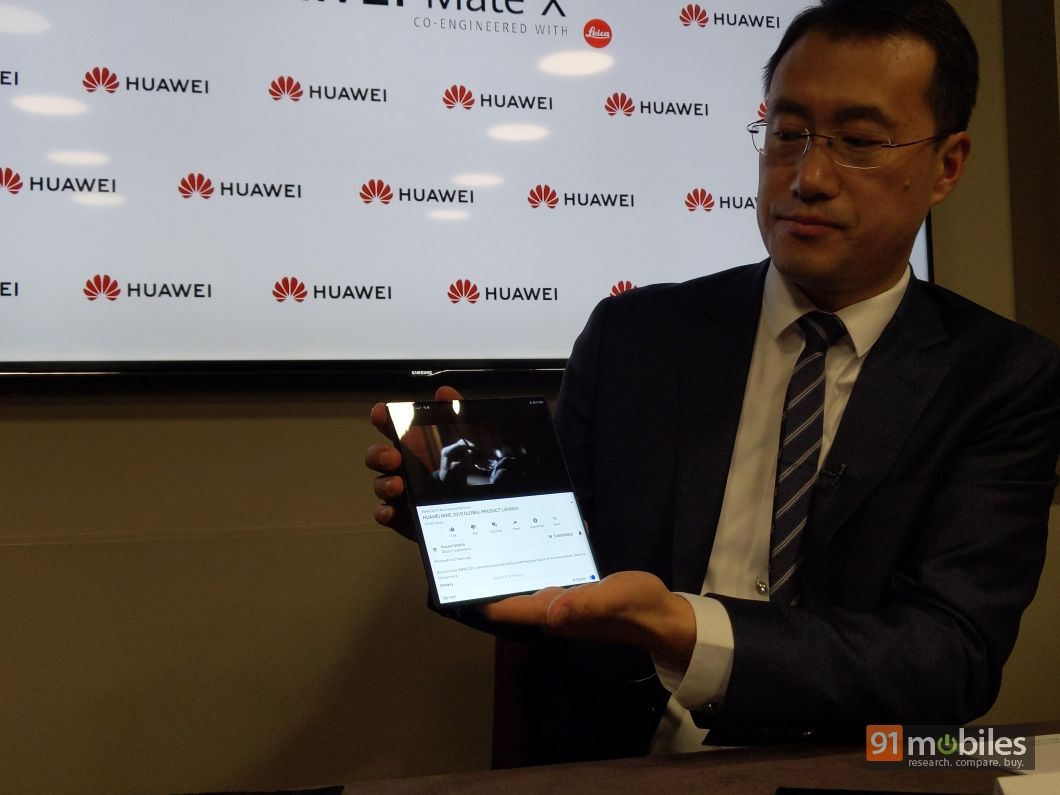 While foldable nature of Huawei’s Mate X raises most eyeballs, the smartphone packs in a lot more goodies. It’s among the first set of 5G smartphones, and utilises the brand’s in-house Balong 5000 modem to offer the support. As far as the performance is concerned, it’s handled by 7nm Kirin 980 SoC which works alongside 8GB RAM. Storage stands at 512GB. The device also supports dual-SIM capabilities.

Another calling card of the Mate X is its 55W fast charging support, which is the highest wattage as of now. The company claims that the phone can juice up from 0 to 85 percent levels within just 30 minutes — which is astonishing, considering the device features two batteries, which combine to offer a 4,500mAh pack. 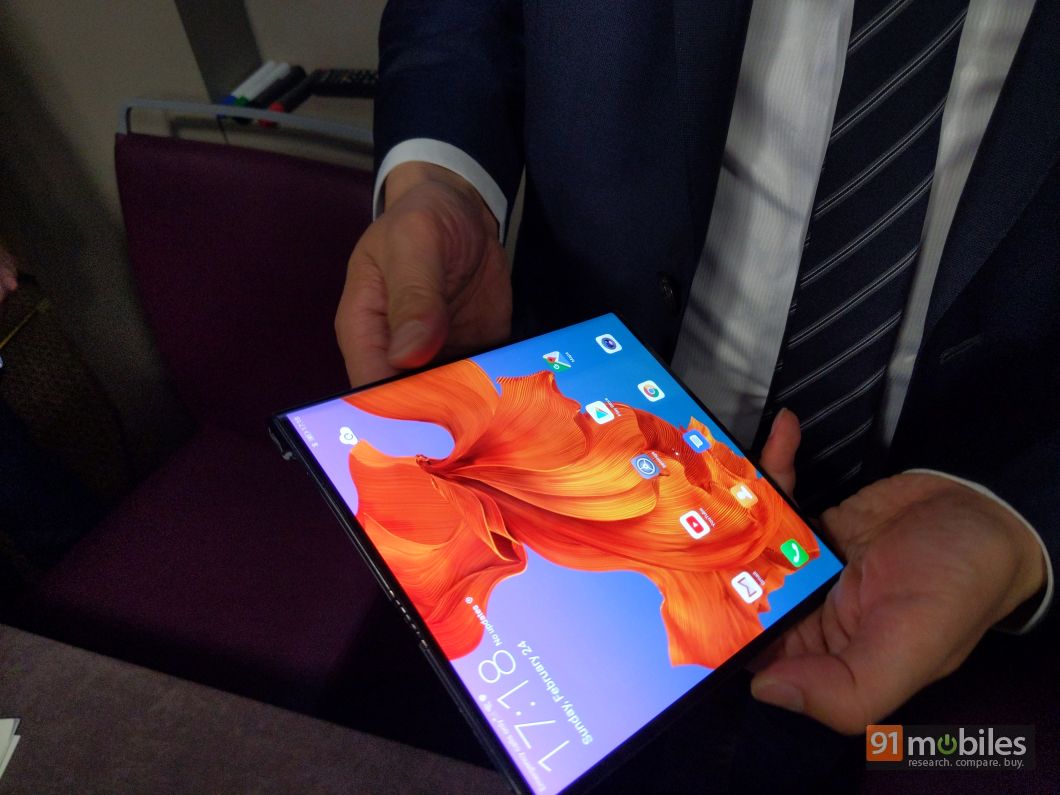 The Huawei Mate X is, simply put, the best implementation for the foldable displays. It’s elegant, doesn’t change the way we use smartphones. More importantly, unlike the Galaxy Fold, which raises more questions than answers, the Mate X does seem to be ready for a commercial launch – though I couldn’t check out the device myself, as much as I wanted to. Since it’s a 5G device, Huawei is also partnering with telcos across the world to launch it by mid-2019. While its sticker price of €2,299 (approx. Rs 1,85,000) might be on the higher side, I’m so excited to see the possibilities such a form factor could offer.