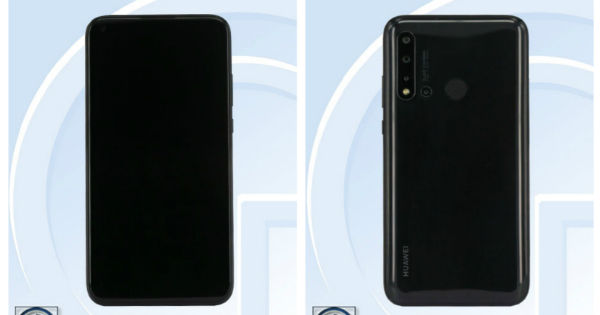 Huawei is scheduled to launch the Nova 5 and Nova 5i smartphones On June 21st. While we wait for the launch, the Nova 5i recently appeared on TENAA, revealing key specifications including its processor, display size and more. Now, the listing is updated with images of the phone, reiterating the vertically arranged quad cameras at the back and punch hole design at the front. On close observation, it is possible the Huawei Nova 5i could be a version of the recently introduced Huawei P20 Lite 2019.

Furthermore, the Nova 5i has a rear-mounted fingerprint sensor for security, and there is a relatively thin chin on the front. The volume rockers and power button are placed on the right side, while the SIM tray is present on the left spine. Going by the renders, it is possible the Nova 5i could rock a glass sandwich design. Moreover, the TENAA listing suggests the handset is expected to sport 6.4-inch full-HD+ FullView IPS display and could be powered by the octa-core HiSilicon Kirin 710 processor. It runs on Android 9.0 Pie with EMUI 9.0 out of the box. The Nova 5i is likely to arrive in either 6GB or 8GB RAM and 128GB internal storage.

In terms of optics, the Nova 5i is said to pack quad cameras at the back with 4MP primary shooter, an 8MP secondary snapper, a 2MP depth unit and a ToF sensor along with LED flash. For selfies and video chats, it is expected to have a 24MP shooter. As said, there is a rear-mounted fingerprint sensor, and a 3,900mAh battery completes the spec sheet. As for the Nova 5, it is expected to be powered by the Kirin 980 SoC and sport 6.39-inch display with an on-screen fingerprint sensor. We should know more details when the phones go official on June 21st.