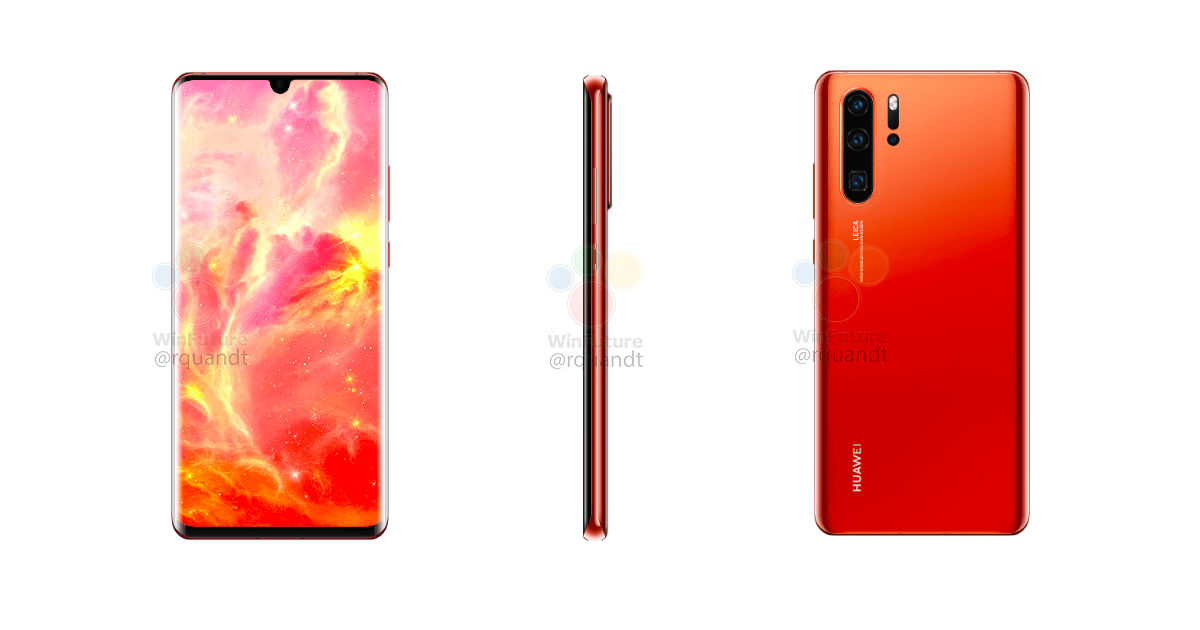 “Huawei P30 Pro renders show the handset in Sunrise Red colour and show it will feature an IR blaster and will not have a 3.5mm earphone jack”

Huawei P30 series is set to go official later this month in Paris. The company has been teasing the quad-camera setup and super zoom capabilities of the P30 Pro, which the high-end variant in the series. Alongside the P30 Pro, Huawei is also set to introduce the P30 and also the P30 Lite. Now, new renders of the P30 Pro have surfaced online, revealing the design of the phone in its full glory in a brand new red colour.

While we have seen the P30 Pro in blue colour, this new render shows us P30 Pro in a red gradient finish. According to WinFuture.de, which published these renders, the colour will be called Sunrise Red. The renders show the handset will come with an IR blaster and will miss out on the 3.5mm earphone jack. In a tweet, Roland Quandt, who runs WinFuture.de, said the P30 will retain the 3.5mm earphone jack and will not get the IR blaster.

As rumoured earlier, the Huawei P30 Pro comes with four rear cameras, featuring a periscope lens and optical and hybrid zoom capabilities. The flagship said to sport an OLED display with a waterdrop-style notch and optical in-display fingerprint sensors. The high-end P30 Pro will get three variants with 8GB RAM as standard and 128GB, 256GB, and 512GB storage options. The handset would come in gradient colours with glass back giving it the premium touch. The Huawei P30 Pro will be powered by the latest 7nm Kirin 980 chipset.

As for the design, the front is slightly curved to the edges, much like the Samsung Galaxy S10 series models. The handset will have three sensors stacked vertically, while the dual LED flash and the fourth camera sensor will be beside them. The third camera on both the devices is said to be a zoom lens to capture a lossless image of the subjects placed at a distant and is expected to extend its zoom range. While it is not confirmed, P30 Pro will reportedly feature Leica Vario-Summilux-H-branded lenses and 16-125mm focal length and f/1.6-f/3.4 aperture lens. With the launch inching closer, we don’t have to wait much longer to know more about the P30 flagship series.