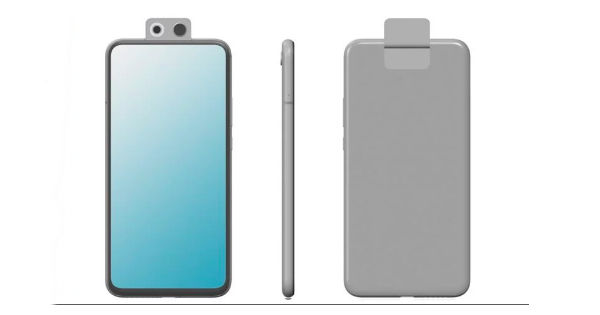 Huawei P Smart Z 2019 smartphone was announced back in May 2019, and it was the first Huawei smartphone to feature a pop-up camera, which allows for a notch-less display with an impressive screen-to-body ratio. Now, a new Huawei patent has appeared on the WIPO (World Intellectual Property Office) database, showing two designs with flip camera design. One of the models in the patent has dual rear cameras, of which one is a rotating module that flips up from the rear to be used as a selfie snapper. The other shows a flip module similar to what we saw previously on ASUS 6Z. LetsGoDigital speculates that these phones could be launched as Huawei P Smart Z 2020 and P Smart Plus 2020.

Starting with the purported Huawei P Smart Plus 2020, its design shows the smartphone will have a flip camera module dual sensors. Like the ASUS 6Z, these will flipped to align with the front panel in order to take selfies. The back panel has been shown in a solid colour and without a physical fingerprint sensor. Thanks to the flip module, the edges around the screen are pretty thin, though the chin is a little thicker.

As for the second model, it is speculated to be called Huawei P Smart Z 2020 because of the dual-tone colour scheme on the back. It will also have two cameras on the back, but only one of them can be flipped to capture selfies. Apart from the LED flash, another sensors can be seen on the back panel, but it is not likely to be a fingerprint sensor.

Unfortunately, not much can be said about the hardware specifications of the two phones at the moment. But from the looks of it, if Huawei indeed launches them, they might be upper mid-range offerings.

Separately, Huawei is also working on an offshoot of the Huawei Y6 smartphone that was launched earlier this year in March. The Huawei Y6s has a waterdrop notch on the front to accommodate the selfie snapper, and there is also a sizeable chin with Huawei logo beneath the display. It looks similar to the original Google Pixel, with a dual-tone design at the back which has a single camera and a fingerprint sensor for security.