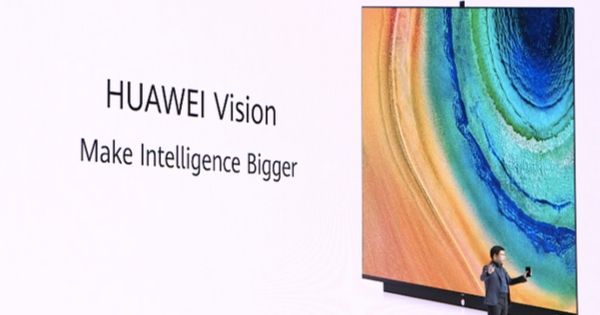 During the Huawei Mate 30 launch event today in Munich, Germany, the Chinese manufacturer also unveiled a smart TV. The Huawei Vision is a smart TV that features a 4K Quantum Dot Display, super slim metal bezels, a pop-up selfie camera, plenty of AI wizardry, and runs on the in-house HarmonyOS. If all of this rings a bell, then that’s probably because Huawei’s sub-brand Honor already launched a similar smart TV with a pop-up camera and Harmony OS onboard. However, the Huawei Vision gets some additional features, better sound, larger display, and more.

Huawei has not reveal the pricing or availability for the Vision Smart TV. The 4K TV from Huawei will be available in 65-inch and 75-inch variants to start with. However, the company announced that a 55-inch and 85-inch model will be launched in the coming months. During the event, Huawei spoke highly of the TV and stated that it is not just a TV, but like a smartphone with a large display and Hi-Fi sound.

The 4K Quantum Dot QLED screen offers up to 120Hz refresh rate and 100 percent NTSC colour gamut. Huawei also mentioned that the TV comes with an industry best sound system, but we can’t really be sure about that. It comes with 8 inbuilt speakers, a sub-woofer, which provides professional 5.1 surround sound with intelligent sound modelling and beam control. The pop-up camera on the TV can be used for video calling, but also features AI Face recognition, skeletal joint recognition, and pitch/body recognition.

The smart TV allows users to share content with Huawei smartphones via the OneHop projection feature and can act as a Smart Home hub for all the IoT products in the house via HiLink. It supports over 900 products under 100+ categories. The TV comes with a touch remote control that connects to the TV via Bluetooth 5.0. The remote can be charged via the USB port and one charge lasts about 3 months. Huawei Vision is powered by the Hongchu chipset, which also brings the Honor Vision TV to life.