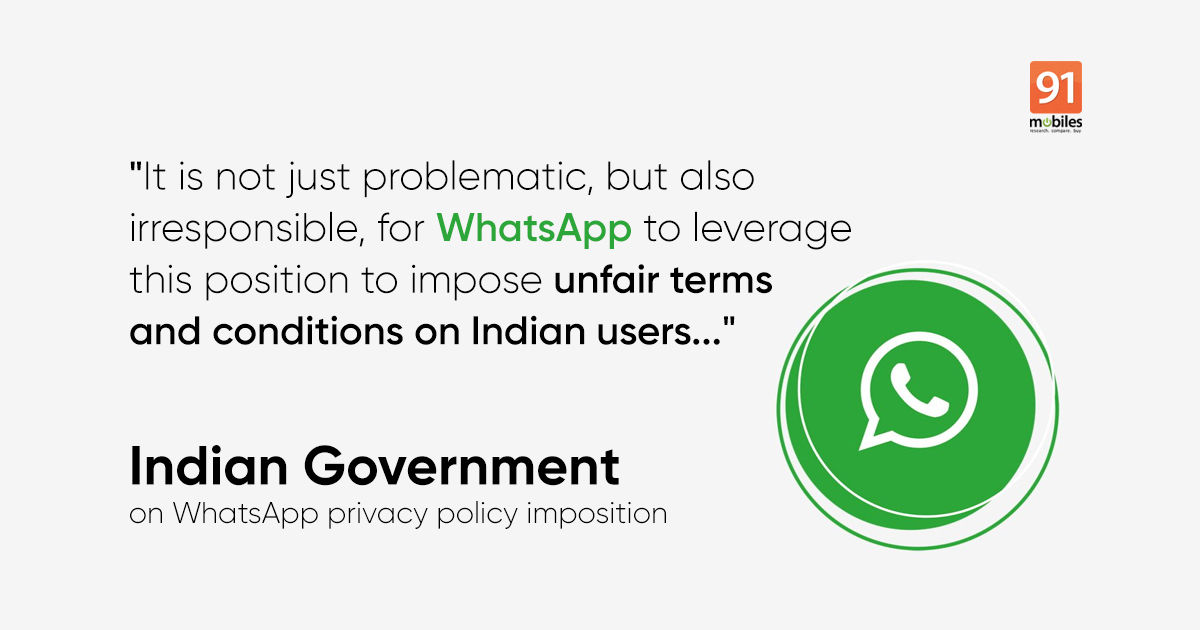 WhatsApp’s never-ending back-and-forth about its new privacy policy seems to have angered the Indian government. After a series of reassurances, followed by threats of account deletion, and some whataboutism, the Ministry of Electronics and Information Technology (MeitY) has put its foot down and asked WhatsApp to withdraw its controversial privacy policy in India. WhatsApp could potentially face legal troubles should it not address the Ministry’s concerns in time. Sources familiar with the matter told TechCrunch that the ministry isn’t pleased with WhatsApp’s new rules and had the following to say about the matter,

“In fulfilment of its sovereign responsibility to protect the rights and interests of Indian citizens, the government of India will consider various options available to it under laws in India”

This wouldn’t have been much of an issue if WhatsApp implemented its new policy uniformly. However, that is far from the case, as it does not apply to users based in the E.U, which has ironclad data protection and privacy laws. The Ministry took cognizance of WhatsApp’s double standards and said:

“It is not just problematic, but also irresponsible, for WhatsApp to leverage this position to impose unfair terms and conditions on Indian users, particularly those that discriminate against Indian users vis-à-vis users in Europe.”

For those out of the loop, WhatsApp’s new privacy policy would let it send back copious amounts of data to the mothership i.e. Facebook. WhatsApp insists that it would only apply to chats with business accounts, but that still qualifies as an egregious invasion of privacy, whichever way you look at it. If you’re on the lookout for WhatsApp alternatives, here are a few that might pique your interest.