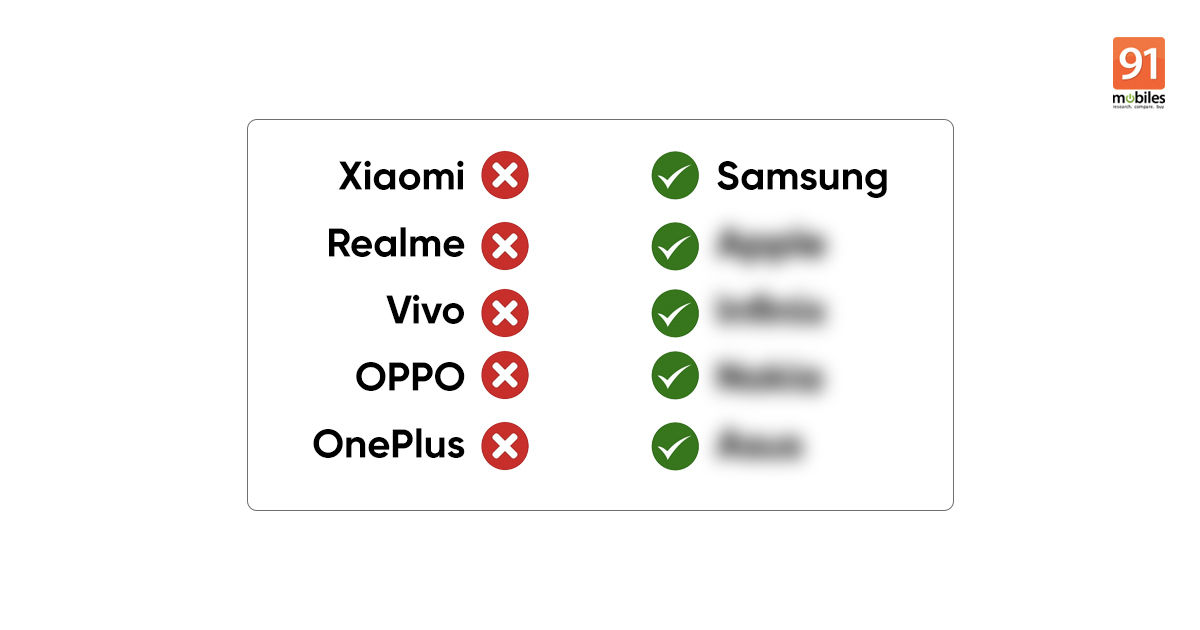 The stand-off between India and China over border issues and the coronavirus pandemic both have escalated anti-China sentiments in India. Social media users in India have been vociferously asking for a boycott of Chinese brands and products, including smartphones and apps, in the country. Just last week, boycott TikTok and ‘Remove China Apps‘ were trending in India. The latter targets apps from Chinese developers installed on the user’s phone and provides them with simple steps to uninstall them from their handsets. Now, a handful of users believe that they should boycott Chinese smartphone brands such as Xiaomi, Realme, OnePlus, OPPO, Vivo, Huawei, Infinix, Tecno, and Motorola.

That would leave only brands like South Korea’s Samsung and LG, Taiwanese ASUS, US-headquartered Apple, Finland-based Nokia/ HMD Global, and Japan’s Panasonic as the prominent players in the Indian smartphone market. It should be noted that Foxconn — which has significant operations in China — is an investor in Finland’s HMD Global through its subsidiary FIH Mobile Limited; Foxconn is based in Taiwan and FIH Mobile is registered in the Cayman Islands. So, we looked at brands headquartered outside China that operate in the Indian smartphone market to check out what options we have left if Chinese brands are removed from the equation. Without further ado, this is what the Indian market looks like without Chinese smartphone companies:

The budget-segment of India is dominated by Xiaomi and Realme, though Samsung has made some inroads there. If we remove the popular offerings from the Chinese OEMs, such as Realme Narzo 10A, Realme C3, and Redmi 8A Dual, you’re left with the likes of Samsung Galaxy M10s, Galaxy A10s, Nokia 2.3, LG W30, and Panasonic Eluga Ray 610. While the handsets from ‘non-Chinese brands’ are good enough, they lack the firepower Xiaomi and Realme phones bring to the table.

As for the affordable segment of India, you’ll have to give up on VFM smartphones such as POCO X2, Realme 6 series, and Redmi Note 9 Pro series if you’re looking for phones from non-Chinese brands under Rs 20,000 right now. The alternatives list includes Samsung Galaxy M31, Galaxy M21, Nokia 7.2, and LG W30 Pro.

The options from non-Chinese brands increase in number substantially in this segment. OnePlus, Vivo, OPPO, Realme, and Xiaomi offer a lot of smartphones in the Rs 21,000 to Rs 40,000 segment, but even without them, there will be sufficient models to choose from. These include the Samsung Galaxy Note 10 Lite and Galaxy S10 Lite, ROG Phone 2 from Taiwanese phonemaker ASUS, Nokia 9 PureView, and Apple’s iPhone 8 series. Google may launch its Pixel 4a series in the segment in July, but for now, you can get the Pixel 3a.

The flagship segment of India has substantially fewer offerings from the Chinese brands, so your options won’t be as limited. You can either go with Apple iPhone SE 2020, iPhone 11 series, or with Samsung Galaxy S20 series instead of OnePlus 8 series and Mi 10. LG and Google also offer smartphones in the premium segment so you’re covered in that respect.

So this is what the Indian market will look like if Chinese companies up and left the country — fewer good choices in the budget and mid-range segments and not much of an effect in the premium category. Of course, many of the non-Chinese phones too are manufactured in China or include components that are sourced from the country so it will be hard to find a smartphone that is completely made outside China, without materials procured from the country. Moreover, many Chinese brands, such as Xiaomi, Vivo, and OPPO, are part of the Make in India programme and manufacture much, if not all, of their smartphones in the Indian market, blurring the lines between Chinese and non-Chinese phones.