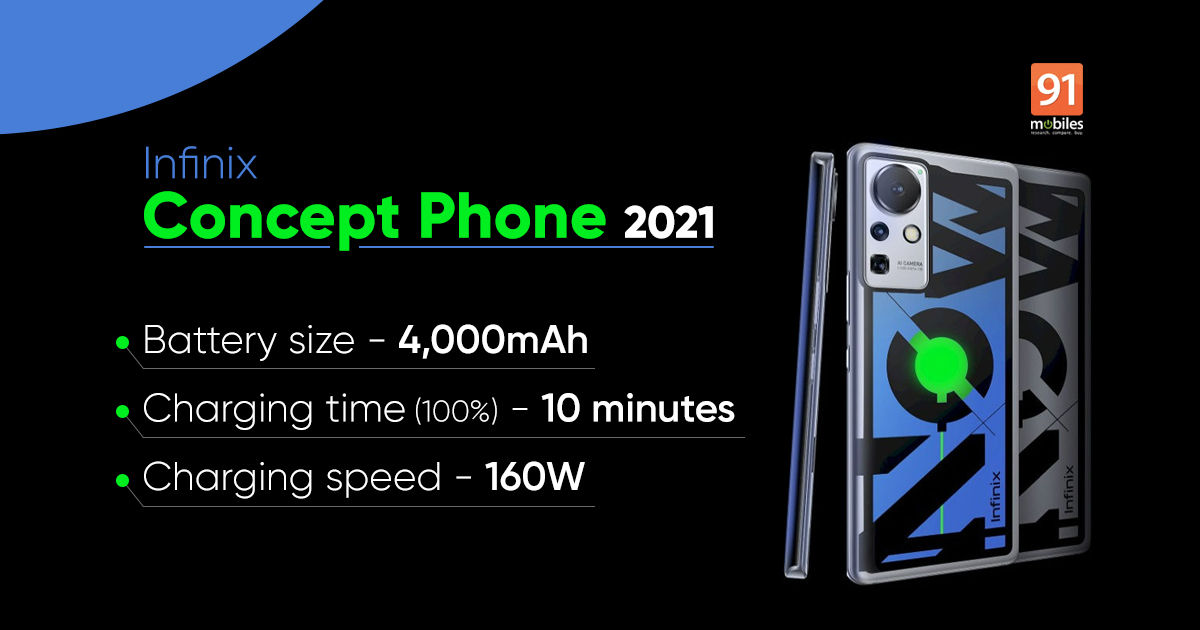 Infinix Concept Phone 2021 has been unveiled and it highlights a whopping 160W fast-charging support. The charging solution claims to fully charge a 4,000mAh battery in just 10 minutes of time. Infinix is using the phone to showcase some of the other premium features it is working on, including a colour-changing technology. The 160W fast-charging technology is built around an 8C battery, that has 18 percent lower internal resistance compared to a 6C battery, according to the brand. The C-rate numbers detonate how fast a lithium battery can charge or discharge. 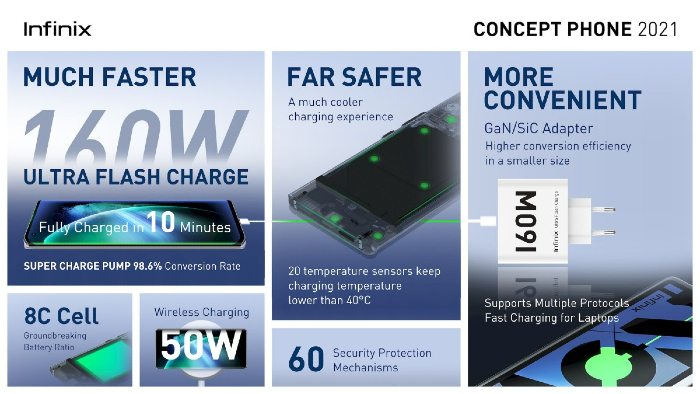 The company has developed the Super Change Pump that converts the incoming voltage from the USB Type-C port to the voltage that goes into the battery itself. It boasts 98.6 percent efficiency. In comparison, OPPO’s 125W system has three parallel pumps that achieve 98 percent efficiency. The Infinix Concept Phone 2021 has 20 temperature sensors around the device for heat reduction. These will keep the phone temperature under 40 degrees. In case the temperature is going beyond 40-degrees, security protection is triggered to avoid any further damage. The phone is said to have over 60 Security protection mechanisms. The 160W charging technology is built on Gallium Nitrate (GaN) and Silicon Carbide (SiC) semiconductors protocols. The phone also supports fast wireless charging up to 50W, which is already supported by many existing phones on the market.

Additionally, there are few other design concepts that Infinix has explored, including a 6.67-inch AMOLED 1080p display with extreme curves at the sides. It has an 88-degree curvature, leaving no room for buttons on the side. There’s also a stylised “NOW” engraved on the back, which is part of the colour-changing technology that is based on electrochromic and electroluminescent tech. The inside of the “O” pulses when the phone is charging, while the rest of the back panel can change from silver-grey to light blue colours to notify about incoming calls, etc. Moving on, it has a 135mm periscope lens that can digitally zoom of up to 60x