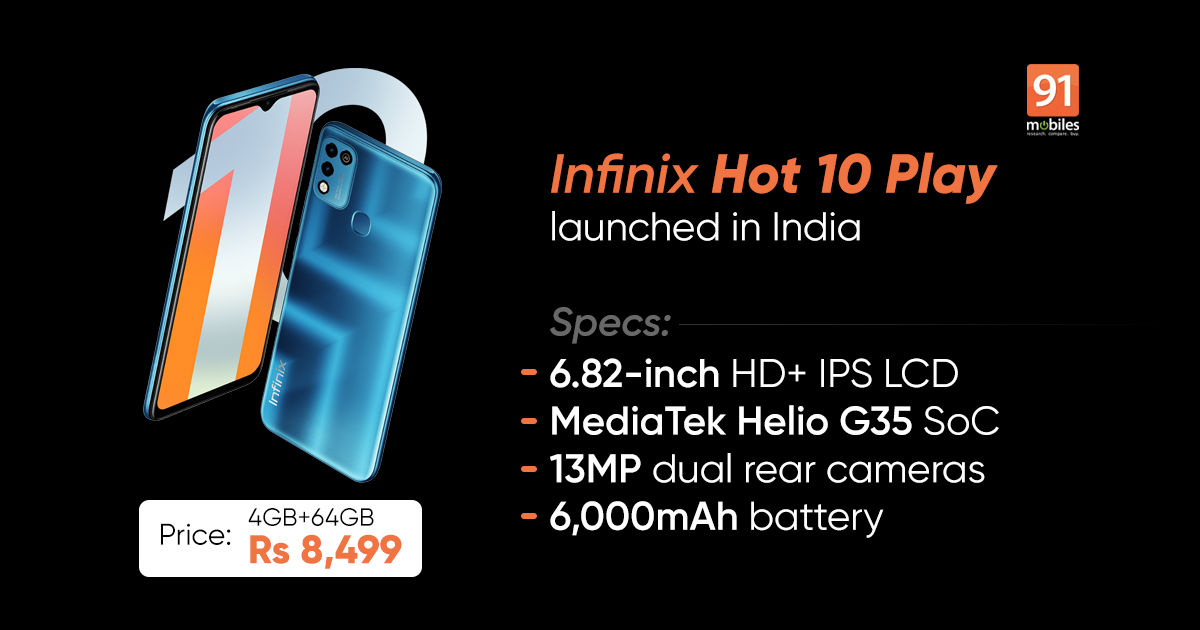 Infinix Hot 10 Play has become the latest smartphone from the Chinese brand to launch in India as a budget option aimed at users who want a large display, gaming processor, and a big battery.. It comes as a trimmed-down version of the Infinix Hot 10 that was launched in the Indian market in October last year. The Infinix Hot 10 Play is already available in a few other markets around the globe including Pakistan and the Philippines. However, the one that has been launched in India has Helio G35 SoC as opposed to the Helio G25 chipset that is being used in the same smartphone in other markets.

The Infinix Hot 10 Play price in India is Rs 8,499 for the sole 4GB RAM + 64GB storage configuration. The phone will go on sale in the Indian market on April 26th exclusively via Flipkart. You can get the device in four colors, Purple, Aegean Blue, Morandi Green, and Obsidian Black. There is a 5 percent cashback on the Infinix Hot 10 Play if you use Flipkart Axis Bank Credit Card for the payment, which will bring down the price of the device to Rs 8,074.

The Infinix Hot 10 Play features a 6.82-inch IPS LCD with HD+ (1640 x 720 pixels) resolution, 440 nits brightness, and a V-shaped notch. Powering the phone is the MediaTek Helio G35 SoC, which is made on a 12nm fabrication process and features eight Cortex-A53 CPU cores and a PowerVR GE8320 GPU. The phone is available in the Indian market in only one memory configuration, 4GB RAM + 64GB storage. The device runs on the Android 10 operating system with XOS 7 Dolphin customised skin on top.

Infinix Hot 10 Play has a dual-camera setup at the rear with a 13MP primary camera and depth sensor. The company has not revealed the resolution of the depth sensor but you can expect it to be a 2MP unit. At the front, you get an 8MP selfie camera. The front, as well as the rear cameras, can record Full HD videos.

One of the highlights of the Infinix Hot 10 Play its massive, 6,000mAh battery. Connectivity options include dual-SIM 4G support, single-band Wi-Fi a/b/g/n, and Bluetooth v5.0. The company is yet to reveal if the phone has a microUSB port or USB Type-C port. There is also no information at the moment if the device has a 3.5mm audio jack or not.

For security and privacy, the Infinix Hot 10 Play has a rear-mounted fingerprint scanner. According to the brand, it a multifunction fingerprint sensor which you can use to perform actions such as receiving or dismissing a call.