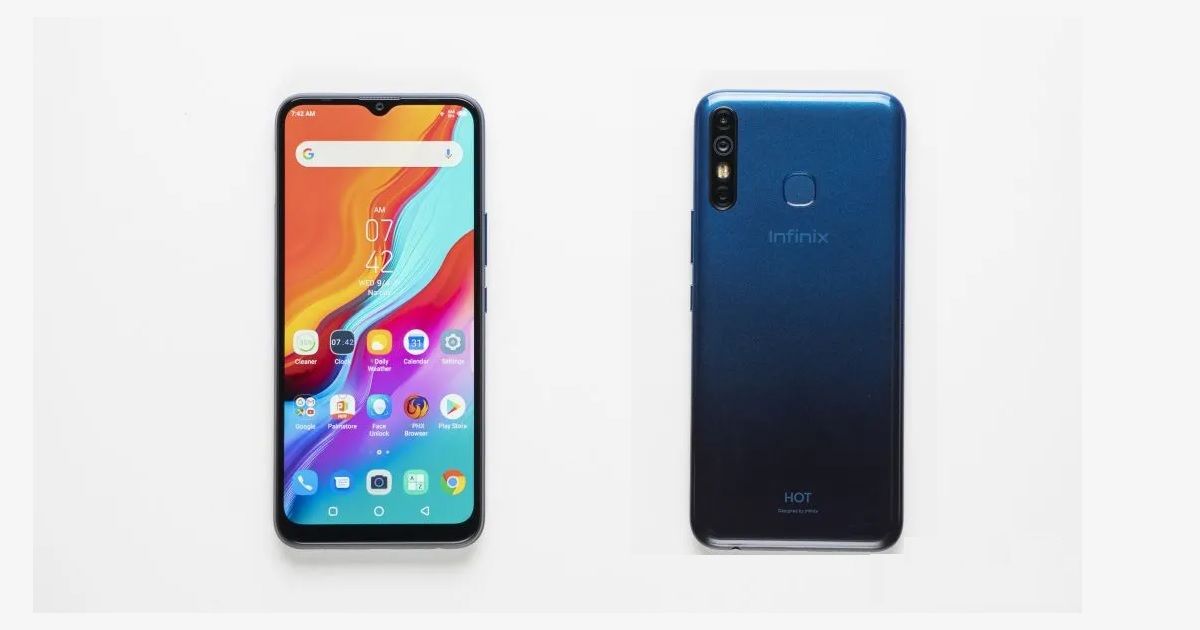 Infinix has just added a new member to its range of Hot series smartphones in India in the form of the Infinix Hot 8. The phone is one of the most affordable phones in the country to flaunt a triple primary camera module at the rear. The handset is the successor to the Infinix Hot 7, which was launched in the country in July as one of the most pocket-friendly phones with four cameras. The Infinix Hot 8 will go on sale in India starting September 12th via Flipkart. Ahead of the launch, we spent some time with the new handset, and here’s our unboxing and first impressions of the same.

Talking about the retail box first, the Infinix Hot 8 ships with a wall charger, a micro-USB cable, a SIM ejector tool, and some documentation, apart from the phone. Notably, the company has also bundled the smartphone with a transparent protective cover case. There are no earphones inside the box.

Moving on to the design, the Infinix Hot 8 is one of the best looking phones in its segment. The polycarbonate smartphone features an attractive gradient finish at the rear with a light hue on the top merging into a much darker shade at the bottom. While the Infinix Hot 7 featured an iPhone-like wide notch, the successor sports a much smaller waterdrop notch above the screen. The placement of ports and buttons is standard with the volume rocker and power key placed on the right side, and a micro-USB port, a speaker, and a 3.5mm headphone socket sitting at the bottom edge. The SIM card tray has been placed on the left side.

Talking about the features, the Infinix Hot 8 sports a large 6.52-inch display bearing HD resolution and an aspect ratio of 20:9. The screen looks vibrant enough to provide an immersive media experience with good viewing angles at its price range. Since the device is quite tall, people with small hands could find it hard to use the handset with a single hand. Software-wise, the smartphone boots XOS Cheetah v5.0, which is based on Android 9 Pie. The phone is loaded with a handful of additional apps and sadly they can’t be uninstalled.

Under the hood, the Infinix Hot 8 sports MediaTek’s octa-core Helio P22 processor, which is accompanied by 4GB of RAM and 64GB of expandable storage. In our brief interaction with the device, the handset performed smoothly and games like PUBG Mobile ran efficiently at medium graphics settings. However, wait for our review of the phone for the proper verdict on its performance.

The major highlight of the Infinix Hot 8 is its cameras. The phone is fitted with a vertically-placed triple camera system at the back, which consists of a 13MP f/1.8 main sensor, a 2MP depth sensor, and a low-light shooter. On the front, there’s an 8MP camera bearing an aperture of f/2.0, 81-degree field of view, and a 4P lens. The few photos we captured with the handset had decent details for the price range it is being offered at. We will talk more about the camera performance in our upcoming review of the device.

In terms of connectivity, the Infinix Hot 8 features dual-SIM slots, dual 4G VoLTE, Wi-Fi, Bluetooth 5.0, and A-GPS with GLONASS. There’s a fingerprint sensor onboard at the rear, which is capable of unlocking the phone quickly. Lastly, a massive 5,000mAh battery completes the list of the specs, which should be able to provide at least two days of moderate usage.

Priced competitively at Rs 6,999 (inaugural offer), the Infinix Hot 8 seems to be good value for money . The phone is being offered in two attractive hues – Quetzal Cyan and Cosmic Purple.