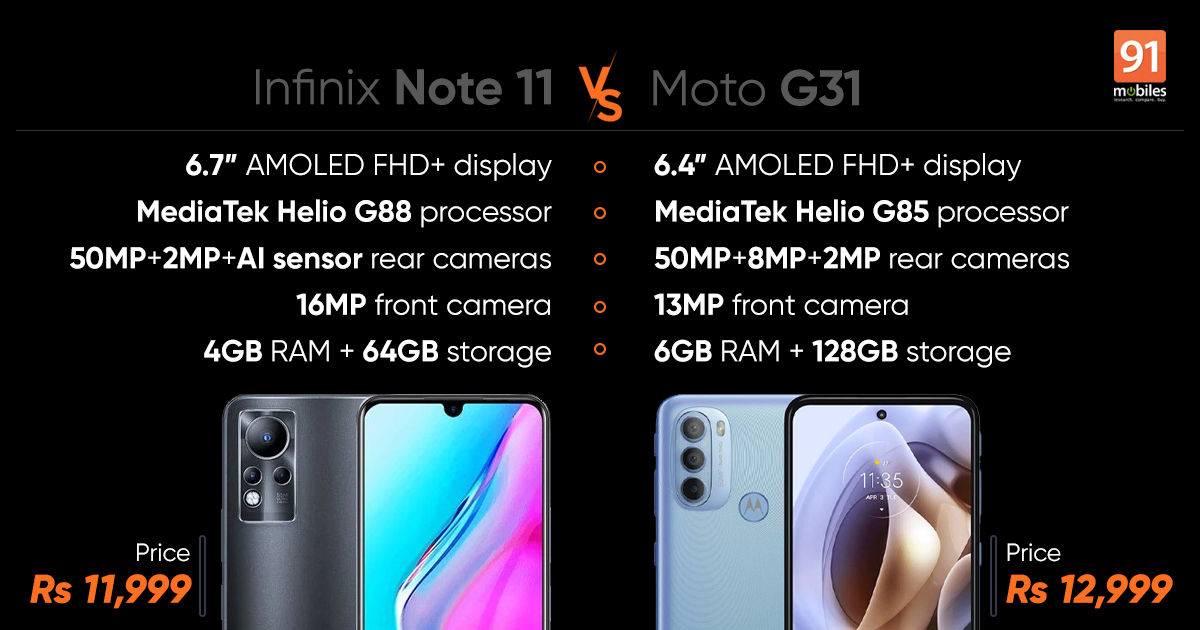 Infinix recently launched a brand new smartphone in India called the Infinix Note 11. The phone is packed with features and is an excellent budget buy. It gets a large AMOLED display, 33W fast charging support, triple rear cameras, and is equipped with a MediaTek Helio G series gaming chipset. The Infinix Note 11 competes with phones such as the recently launched Moto G31. In this post, we’re going to compare the Infinix Note 11 against the Moto G31 to find out which is the better buy. The Moto G31 is priced similarly and use a MediTek Helio G-series processor as well.

The Infinix Note 11 price in India is Rs 11,999, and that’s for the only available variant with 4GB RAM and 64GB storage.  The Note 11 comes in Glacier Green, Graphite Black, and Celestial Snow colour options.

The Infinix Note 11 is available for purchase via Flipkart and the first sale was on December 23rd. Meanwhile, the Moto G31 went on sale on Flipkart last week. However, at the time of writing, the phone was out of stock online.

Let’s take a look at the differences between the two phones in terms of specifications and features.

In the performance department, the Infinix Note 11 has a slight edge over the Moto G31 as it uses a newer MediaTek Helio G88 chipset. The processor is paired with 4GB RAM and 64GB internal storage. The phone features a Mali G62 GPU, which should help it run games much smoother than its competition. It also gets a microSD card slot for storage expansion.

The Moto G31 is also a good budget smartphone, but since it has an older MediaTek Helio G85 processor, it sort of lags behind the Infinix Note 11 when it comes to performance. The G31 gets up to 6GB RAM and 128GB storage, which should help it perform better in multitasking.

Winner: Infinix Note 11 wins this round as it gets a faster processor and comes with 4GB RAM and 64GB storage.

Infinix has included a large 6.7-inch AMOLED display on the Note 11, which offers a 92 per cent screen to body ratio. The display has slim bezels on three sides, a chin, and a waterdrop notch at the top. The panel supports a 100 per cent DCI-P3 colour gamut and has a maximum brightness of 750nits. It also gets full HD+ resolution and a standard 60Hz refresh rate.

The Moto G31 comes with a smaller 6.4-inch AMOLED with Full HD+ resolution and 60Hz refresh rate. It gets an 88.8 per cent screen-to-body ratio and has a centred punch-hole camera cutout. The screen offers a peak brightness of 700nits and has slim bezels with a noticeable chin.

Winner: Infinix Note 11 thanks to its larger display with higher brightness and better screen to body ratio.

Coming to the optics, both smartphones feature a triple rear camera setup. The Infinix Note 11 has a primary 50-megapixel sensor, which is accompanied by a 2-megapixel depth sensor, and a third AI-sensor. For selfies and video calls, a 16-megapixel sensor is available at the front.

The Moto G31 also comes with a 50-megapixel primary sensor at the back, along with an 8-megapixel ultra-wide unit, and a 2-megapixel macro sensor. A 13-megapixel camera is available on the front for selfies and video calling.

Winner: Moto G31 as its camera setup offers more versatility thanks to the presence of the main sensor, ultra-wide, and a macro.

Battery backup is an important feature that’s looked upon when purchasing a new smartphone. The Infinix Note 11 comes with a 5,000mAh battery, which should easily last a day or more. The phone supports 33W fast charging as well.

The Moto G31 also houses a 5,000mAh battery, but it only supports 20W fast charging. Although the battery capacity is the same on both phones, the Moto G31 will take longer to charge.

In terms of connectivity, both phones offer similar options. You get 4G LTE, dual-band Wi-Fi, Bluetooth 5.1, and GPS on the Infinix Note 11. The phone also comes with a 3.5mm headphone jack, and a USB Type-C port.

The Moto G31 also offers dual 4G VoLTE, dual-band Wi-Fi, Bluetooth 5.0, and GPS. A 3.5mm headphone jack and USB Type-C port are available on the phone, along with a dedicated button for launching Google Assistant.