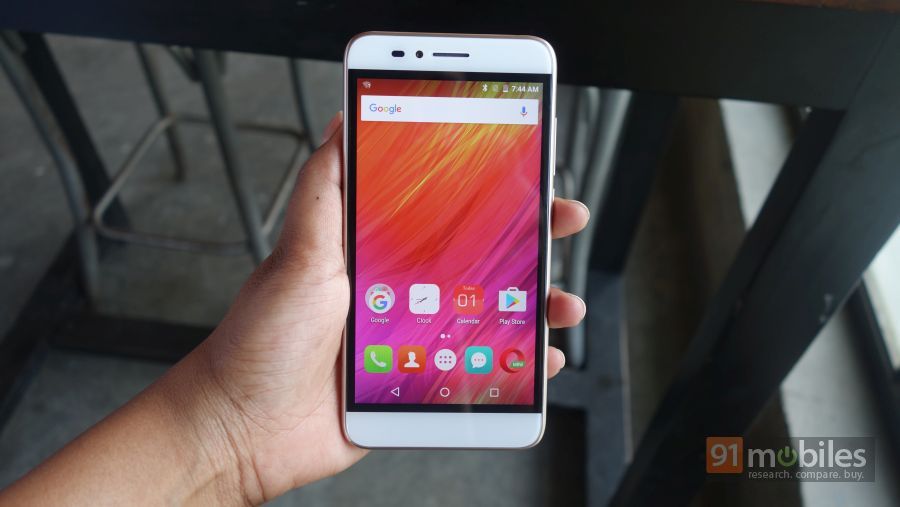 Smartphones priced around Rs 10,000 are all the rage these days and taking stock of this fact is Indian smartphone company, Intex. The brand has updated its portfolio recently and has just launched its flagship smartphone – dubbed the Aqua S7 – in collaboration with Asahi Glass. As the branding suggests, the smartphone’s display comes protected by a layer of Asahi Dragontrail glass. The other highlight of the Intex Aqua S7 is its fingerprint scanner, according to the company. We were present at the launch event and spent some time with the Aqua S7. Here are our first impressions. 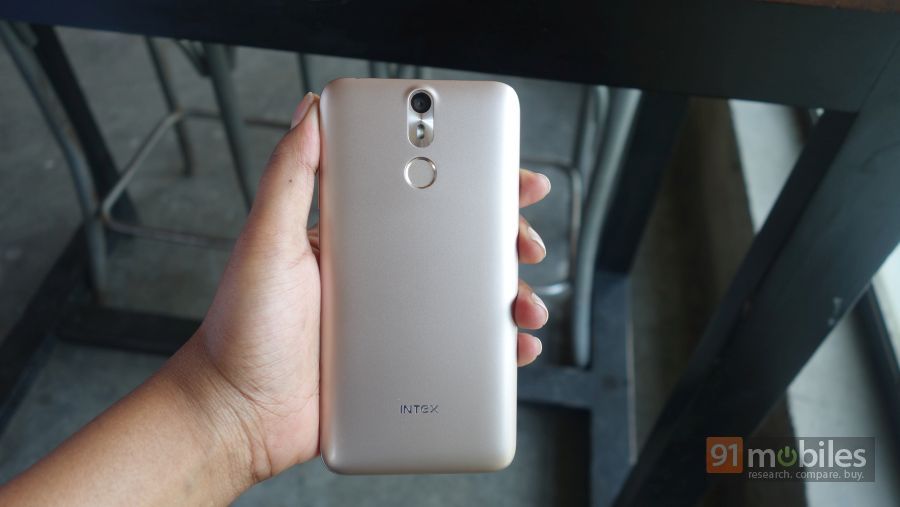 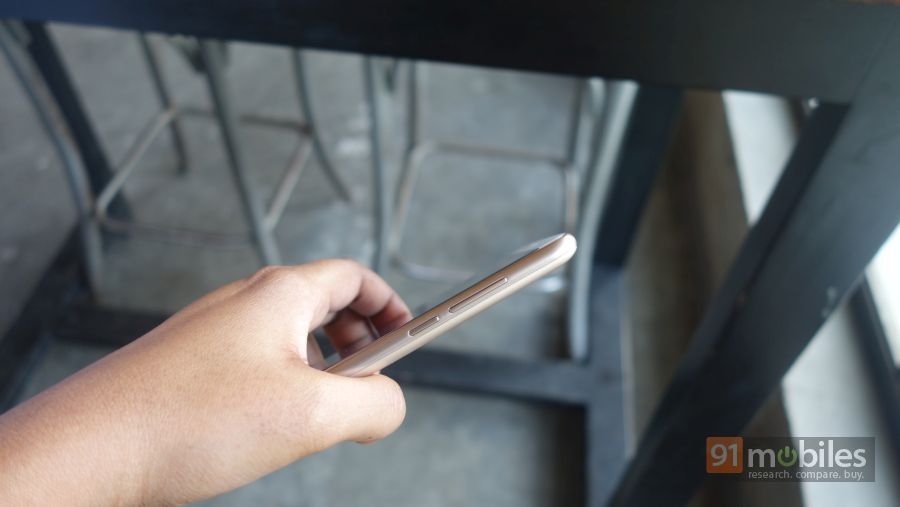 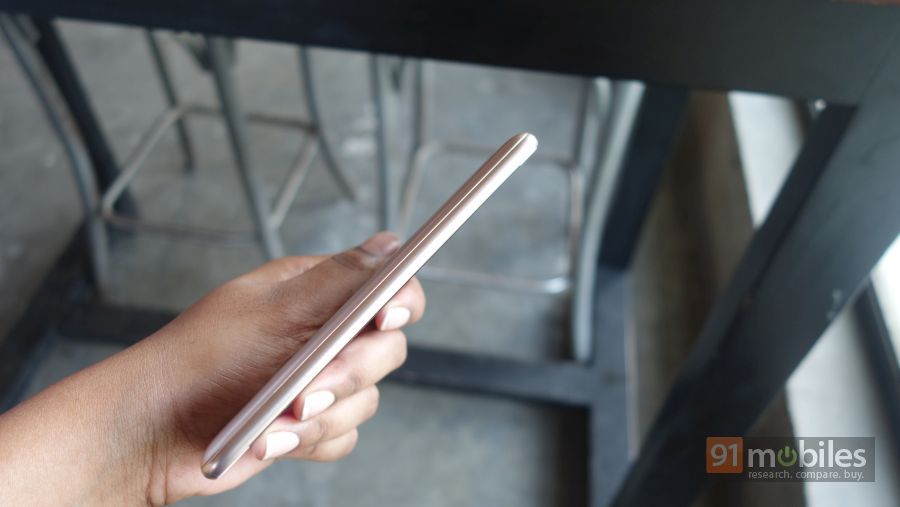 The Aqua S7 is a compact 5-inch smartphone. While it’s not the slimmest smartphone we’ve seen lately, the curved back panel and thin bezels ensures that it sits in the hand quite comfortably. The texture of the back panel is such that it causes the phone to slip easily. However, thanks once again to the phone’s compact design you can actually cup it in your palm and, in the process, make sure that you don’t drop it accidentally. The Intex Aqua S7 offers a removable back panel, and a removable battery, unlike most smartphones in the segment. The rest of the port and button placements are quite standard. 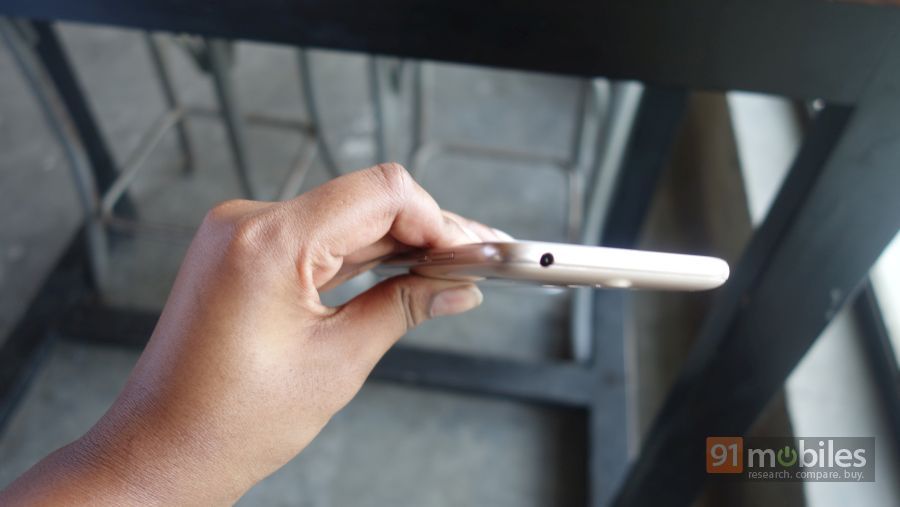 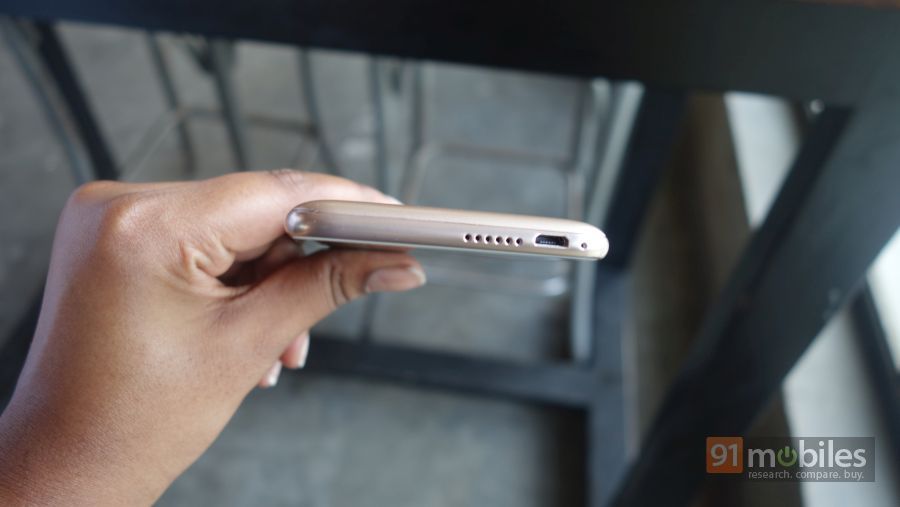 The 5-inch display looked sharp enough, and the colours looked vivid, as well We tested the screen brightness both indoors and outdoors, and weren’t disappointed. The viewing angles, however, were not as impressive. While the SoC on the device is not as powerful as those used by other smartphones in the same price range, the phone felt snappy enough, at least in our short usage session. There’s ample RAM at your disposal, which should result in smooth multitasking. 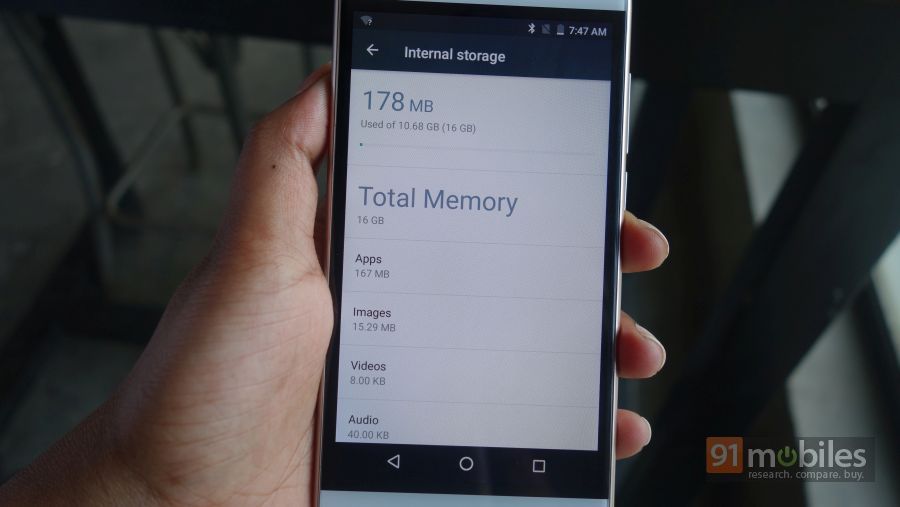 Out of the inbuilt 16 gigs of storage, the Aqua S7 gives you around 10GB for your personal use. You can expand the storage by another 64GB, or utilise the smartphone’s USB OTG capabilities in case of a storage crisis. 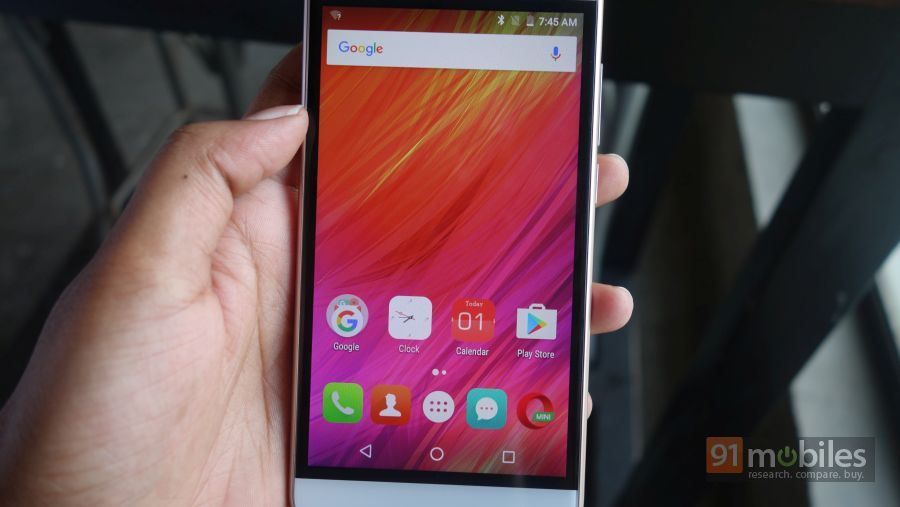 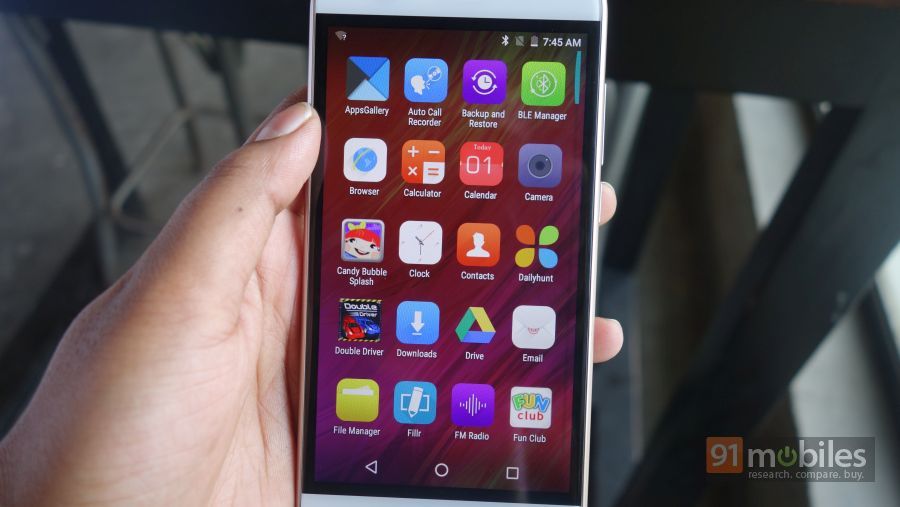 The UI on the phone is mostly stock. Apart from the slightly tweaked icons, you won’t find much difference. The Aqua S7 comes preloaded with quite a few third party applications like Oxigen Wallet, Opera Mini, UC Mini, Saavn, Dailyhunt, to name a few. The device is upgradeable to Android Nougat. 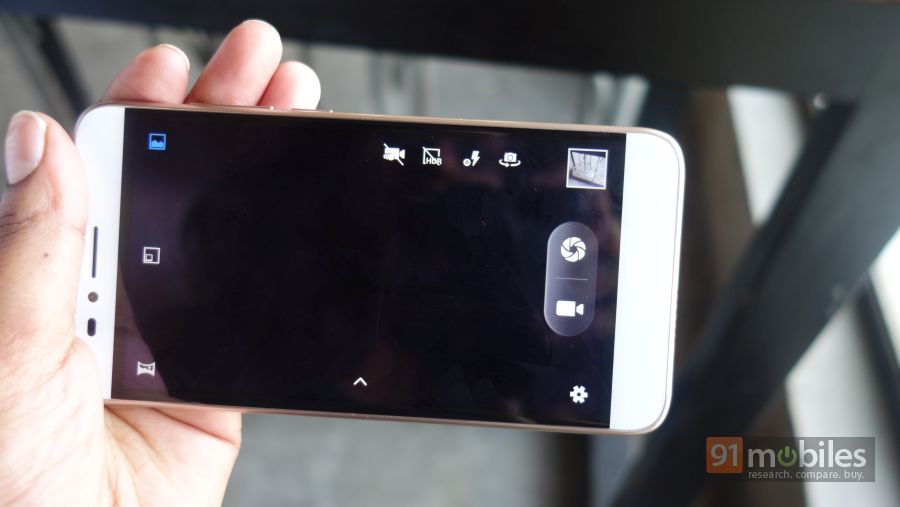 The default camera app on the phone looks very similar to the latest Google camera app, with toggles to control the flash, switch on the HDR mode, switch to the front camera, and the video mode on top of the viewfinder. The app also offers a few shooting modes like Panorama, and Picture-in-picture, along with some real time filters. A toggle on the bottom left of the viewfinder gives you access to all the usual camera settings. 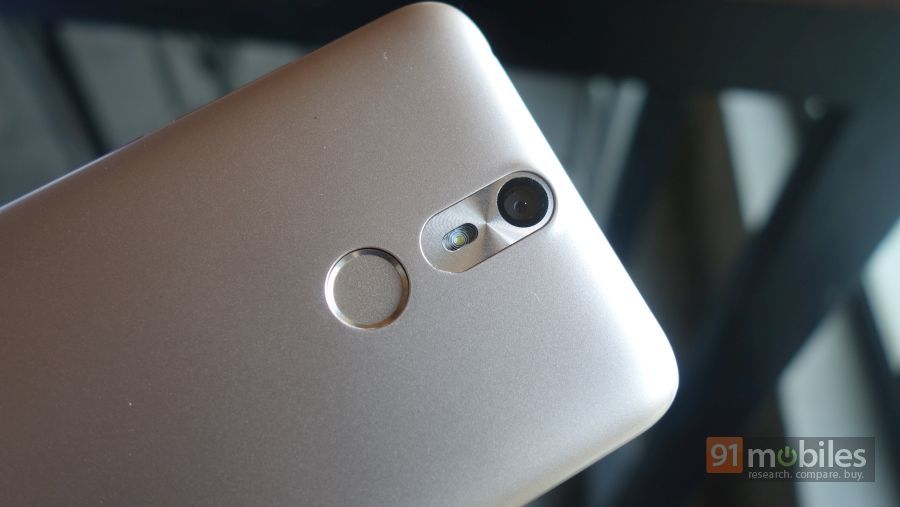 We tried clicking a couple of pictures and found that the Aqua S7 is not the fastest when it comes to focussing, but it still does the job. The shutter speed was decent, and camera seemed to have captured good details and colours – at least when we viewed them on the phone’s screen at the event. However, you will have to wait for our full review – where we test the cameras in different lighting conditions to figure out if the camera is any good. 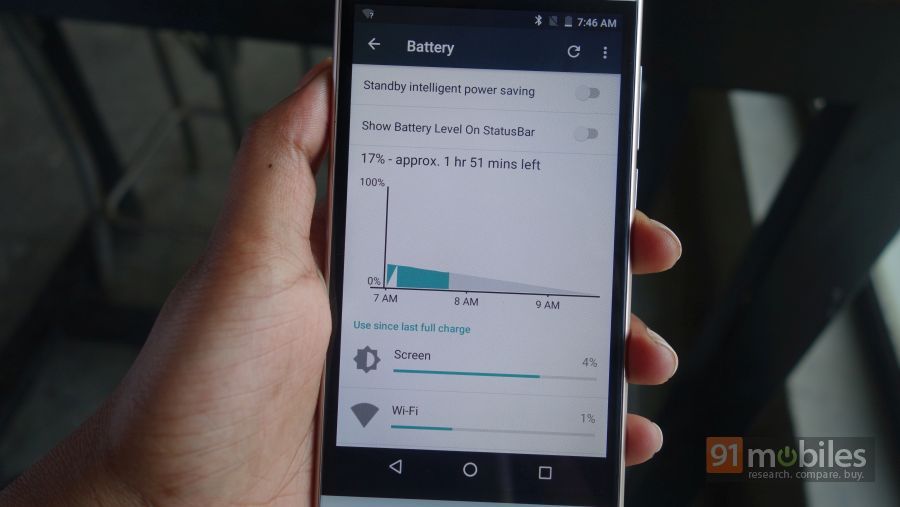 Considering the display size and resolution, along with other specs, we can take an educated guess that the 3,200mAh battery on the Aqua S7 should be able to power it for an entire day. The company claims a talk time of 22 hours, and stand-by time of 10 days on the Aqua S7’s battery, which looks impressive on paper. But should you run into a battery crisis, the phone also offers a Battery Saver mode to extend its life. The Aqua S7 is a 4G VoLTE enabled smartphone, which makes it another device you can use to enjoy the Reliance Jio 4G services.

The Intex Aqua S7 has been launched for Rs 9,499, which puts it directly in competition with the Xiaomi Redmi 3S Prime (review), and the 2GB RAM variant of the Xiaomi Redmi Note 3 (review), both of which sport better overall specifications than the Aqua S7. However, the offline availability of the Intex Aqua S7 can be a major contributing factor to its sales. We’ll be reviewing the phone and pitching it against its competition soon, to find out if it was a smart move from Intex to experiment in the Rs 10,000 segment.