91mobiles.com
Home News iOS 13 will warn users when they uninstall an app with an... 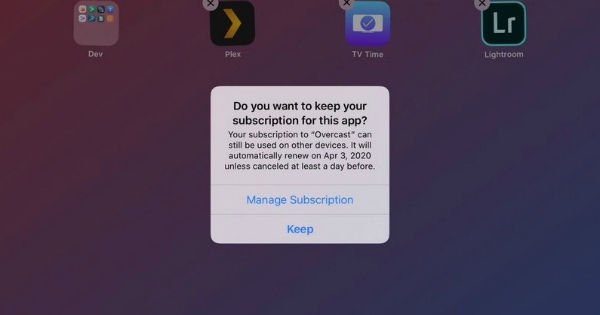 “iOS 13 beta 2’s Keep option will continue the subscription so that it can be used on other devices, while ‘Manage Subscription’ will let them cancel it”

Apple introduced iOS 13 to the world at the WWDC 2019 developers conference earlier this month. Now, days after the announcement, the Cupertino giant has released the iOS 13 beta 2 update, which brings a useful feature that’ll alert users when they’re about to uninstall an app with an active subscription. It’ll throw a pop-up with options such as ‘Manage Subscription’ as well as ‘Keep’. As the name suggests, Keep will retain the subscription and can be used on other devices unless cancelled. On the other hand, ‘Manage Subscription’ will let users cancel the subscription.

Never seen this alert before – Apple now tells you if an app you’re deleting has a subscription still active. Good move.

Furthermore, the pop-up also tells users when their subscription will automatically renew if it’s not cancelled. Notably, Apple’s subscription model let’s users continue to access the service until the end of the subscription period even if it is cancelled immediately.

iOS 13 beta 2 also adds the new High-Key Light Mono Lighting option, and there is also an intensity slider for Portrait Mode lighting effects. The ‘Screen Time Downtime’ settings now sync to Apple Watch. The company has also added new fingers crossed, shush, thinking, victory Memoji stickers and “Select All” is back again in the Mail app. When the voice-control option is enabled, a microphone icon appears on the upper-left corner of the display.

The update also includes a toggle for the parallax button when setting wallpapers and Safari settings has a new ‘preview links’ option. It also updated the CarPlay ‘Now Playing’ layout and design. As announced by Apple, the iOS 13, tvOS 13, and macOS Catalina public betas will be available in July, while the stable will be rolled out as a free update in the fall.