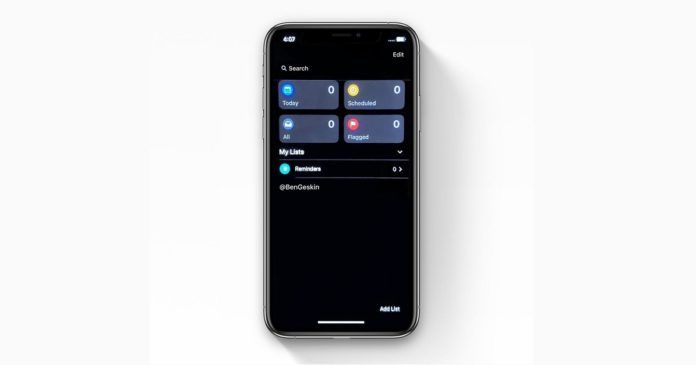 In a few hours, Apple will kick off its Worldwide Developer Conference (WWDC) 2019 in California, US. The iPhone maker is expected to reveal new development on the software front, including the iOS 13. The next-generation software for iPhones and iPads is likely to come with a bunch of improvements, such as Dark Mode. We’ve seen a glimpse of that in the previous leaks. Now, ahead of its release, a render of what the Reminders app with Dark Mode on iOS 13 will look like has been shared by concept creator Ben Geskin.

According to 9toMac, the render is in line with what the publication has privately seen of the new operating system. It further added that the screenshot closesly matches the iPad Reminders app, with the same design and icons.

Geskin’s design shows the Reminders app has a pitch-black interface, which is expected from the iOS 13’s Dark Mode. The buttons – ‘Today’, ‘Scheduled’, ‘All,’ and ‘Flagged’ – have grey tiles, with colour icons popping off the page. The image is reportedly based on screenshots based on an iOS 13 March build, so it’s possible that Apple may show a different design tonight.

Apart from this, the tipster has also shared a new volume indicator present in the same March build. While the volume UI is said to look nothing like that anymore, the Reminders app may come as it is later today. The Apple WWDC 2019 keynote is scheduled to kick off at 10:30 pm Indian Standard Time (IST) to announce iOS 13, macOS 10.15, watchOS 6 and tvOS 13. 91mobiles will bring you all the updates about the key announcements, so keep watching the space.