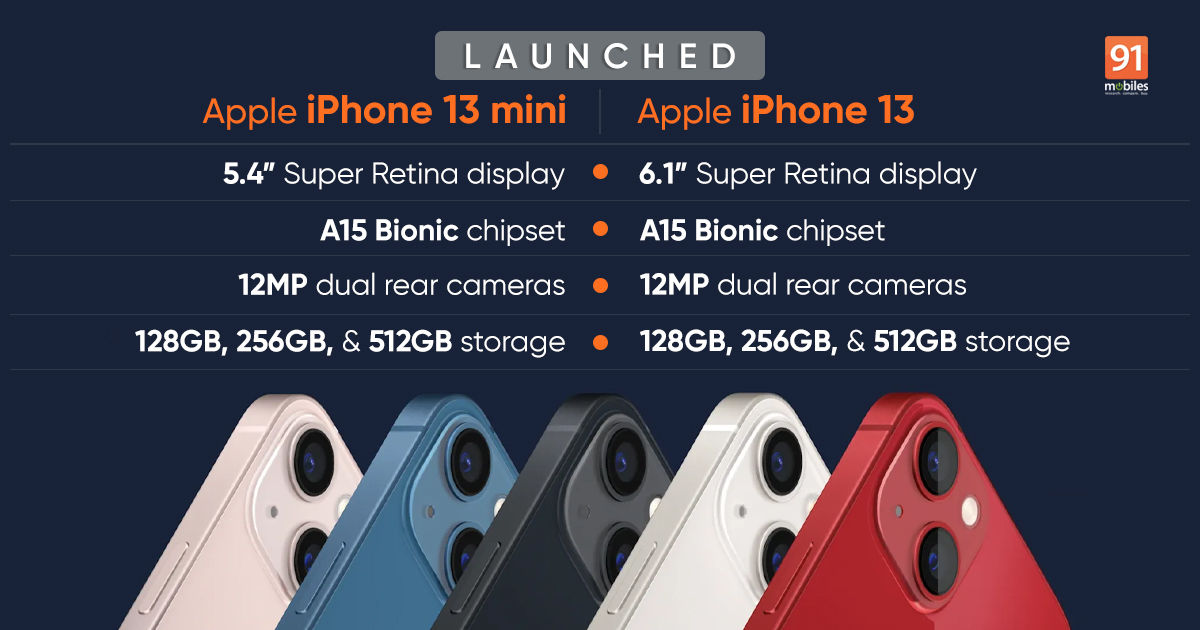 Ending a wait of months, the iPhone 13 series prices, specifications, and sale details have been announced officially. The smartphones — namely iPhone 13 mini, iPhone 13, iPhone 13 Pro, and iPhone 13 Pro Max — were officially announced at Apple’s fall event, alongside the Apple Watch Series 7 and the new iPads. All four new iPhone 13 models are powered by the new A15 Bionic chipset and run iOS 15 out of the box. And for the first time, Apple phones — only iPhone 13 Pro and iPhone 13 Pro Max though — rock 120Hz displays, in an industry that has seen Android phones use refresh rate panels for over two years. These two top-end smartphones also come with triple rear cameras that offer a ton of improvements over last year’s models, while the iPhone 13 and iPhone 13 mini will still remain limited to dual sensors. Lastly, as a minor design upgrade that might not be very easy to notice, all four iPhones have a slightly smaller notch.

As for the colour options, the iPhone 13 and 13 mini come in Pink, Blue, Midnight, Starlight, and Product Red finishes. Their Pro and Pro Max siblings will be available in Sierra Blue, Silver, Gold, and Graphite colours. 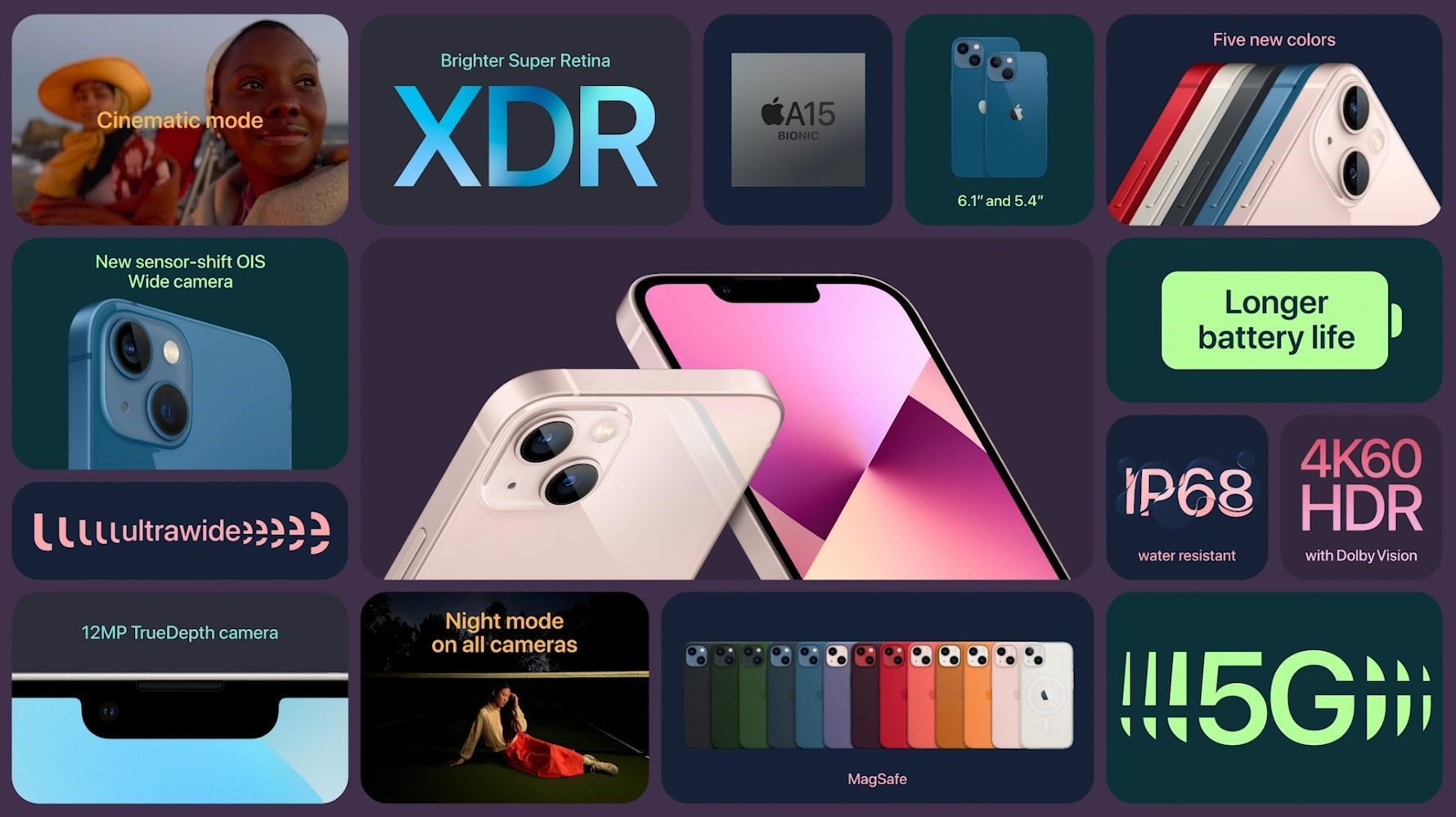 Starting with the iPhone 13 mini and iPhone 13, they both come with OLED Super Retina XDR displays that bear standard 60Hz refresh rate, 460ppi pixel density, and HDR 10, HLG HDR, and Dolby Vision support. The design has been tweaked a little, with a smaller notch and a diagonally arranged camera setup at the back. The display is claimed to be 28 percent brighter and has a 20 percent smaller notch than last year’s iPhone 12 and 12 mini. Having said that, the screen size remains the same: iPhone 13 mini has a 5.4-inch screen, while the iPhone 13 features a 6.1-inch panel. Under the hood, the smartphone rocks a 5G-capable A15 Bionic chipset that is said to offer 50 percent faster CPU and 30% better GPU performance than its competitors.

On the optics front, iPhone 13 and iPhone 13 mini both sport a dual-camera setup at the back, which consists of a couple of 12MP units. The 12MP primary sensor has a larger 1.7micron pixels and f/1.5 aperture, which Apple claims can capture up to 47 percent more light than before, while the 12MP ultra-wide sensor with f/2.4 aperture and 120-degree FOV can capture 50 percent more light. Additionally, both iPhone 13 and 13 mini support sensor-shift stabilisation. There is also a new Cinematic mode and focus transitions support as well. For selfies and video calling, both phones sport a 12MP TrueDepth camera on the front. Sensor-shift OIS, which was limited to just the 12 Pro Max model so far, is available on all four 2021 iPhone models. 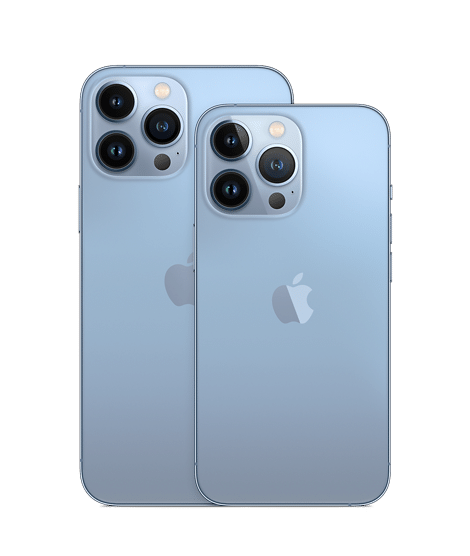 iPhone 13 Pro and iPhone 13 Pro Max have also been introduced with A15 Bionic chipset and iOS 15. The notch on these phones has also been trimmed a little from the sides to give more screen real-estate to the users. However, there are a few things that are exclusive to these two smartphones. The iPhone 13 Pro and iPhone 13 Pro Max both ship with 120Hz refresh rate displays to offer ultra-smooth animation and scrolling. The screen refresh rate can go from 10Hz to 120Hz, depending on the app you are using and its optimal display refresh rate. Apple claims that it has optimised the software of these phones to take advantage of the variable refresh.

Like their predecessor, the regular Pro model has a 6.1-inch Super Retina XDR display while the iPhone 13 Pro Max gets a 6.7-inch Super Retina XDR display. The two also pack triple rear cameras that include an ultra-wide sensor with f/1.8 aperture and autofocus. This is aided by a new telephoto lens, which offers 3x optical zoom and 77mm focal length and a wide sensor that bears f/1.5 aperture and 1.9-micron pixels. The two phones’ cameras, including the telephoto, support Night Mode. They are also said to support up to 6x optical zoom, macro mode for shots up close, Smart HDR 4, cinematic mode, and ProRes 4K30 recording. LiDAR Scanner for AR applications is available on both iPhone 13 Pro and Pro Max; it was restricted to just the Pro Max model last year.

The iPhone 13 Pro lasts more than 1.5 hours longer than 12 Pro’s, whereas its elder sibling 13 Pro Max can last 2.5 hours longer than 12 Pro Max. There is no Always-On display on these new models, but Apple has added a new 1TB storage variant for these modes. Much like the iPhone 13 mini and iPhone 13, the Pro and Pro Max are also 5G capable and support MagSafe charging. They also feature Ceramic Shield and IP68 water- and dust-resistance rating. Obligatory mention that the iPhone 13 series still uses Lightning ports instead of moving on to USB-C.