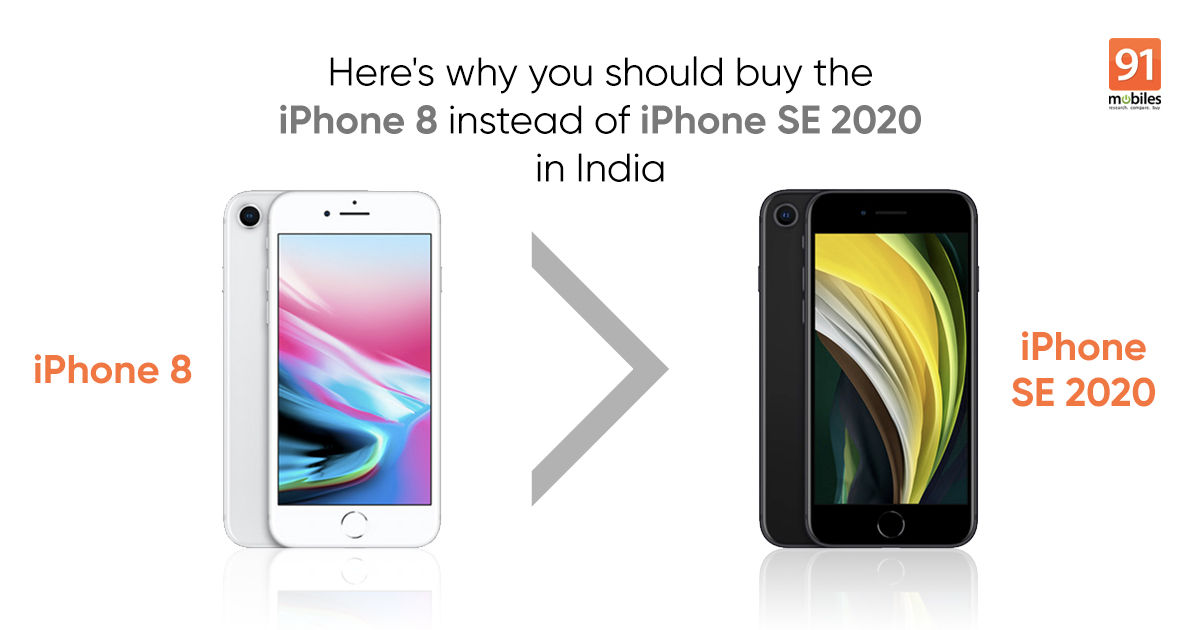 Apple launched the iPhone SE 2020 in India yesterday and it is officially the most affordable iPhone in the company’s current lineup. The new iPhone SE has not only replaced the 2016 model, but also the iPhone 8 series. In fact, Apple has discontinued the iPhone 8 and 8 Plus in several countries, including India. The phones are no longer listed on the official site. However, the iPhone 8 and 8 Plus are still listed on e-commerce platforms such as Flipkart and Amazon, and Apple is unlikely to stop selling these models in India any time soon. While the iPhone SE 2020 is a newer iPhone and comes with updated specifications like the A13 Bionic chipset that look attractive, we believe an argument can be made on why the iPhone 8 is still a better option to buy for people in India.

iPhone 8 price in India is less than iPhone SE 2020

While the iPhone SE 2020 is being sold by Apple as an affordable iPhone, the word “affordable” is relative here. Yes, the new iPhone SE is cheaper than other current iPhone models and the US prices, starting at $399 (approx Rs 30,500), are pretty attractive. However, consumers in India may not feel the same way. The iPhone SE 2020 price in India starts at Rs 42,500 and goes up to Rs 58,300, and calling these prices affordable would be a stretch in a price-sensitive market like India.

The problem with the iPhone SE 2020 prices, especially for the 128GB and 256GB storage options, are that they come quite close to the iPhone XR. While the iPhone XR is now priced at Rs 52,500 after the GST rate hike, it is quite possible to see the price drop to around Rs 45,000 or lower during an e-commerce sale. And we believe that the iPhone XR offers better value compared to the iPhone SE 2020 even if it is an older model as it delivers an edge-to-edge display and longer battery life.

Additionally, the iPhone 8 also supports up to 18W fast charging, just like the iPhone SE 2020. So, both the phones will juice up to 50 percent in 30 minutes, provided you have an 18W or higher charger. And it should come as no surprise, both the phones support wireless charging too.

iPhone 8 has the same display as the iPhone SE 2020

Apple is offering the same display on the iPhone SE 2020 that you find on the iPhone 8. Both the phones come with a 4.7-inch Retina HD LCD display with 1334×750-pixel resolution and 326 ppi pixel density. Both the screens feature True Tone display, 1,400:1 contrast ratio and peak brightness of 625 nits. This essentially means that the iPhone 8 and iPhone SE 2020 will offer the same viewing experience.

The iPhone SE comes with a similar camera setup as the iPhone 8 i.e a 12MP f/1.8 primary sensor and a 7MP front-facing camera. The main camera on both the phones support optical image stabilisation, up to 5x digital zoom, and True Tone flash. On paper, the camera sensors look identical and suggest that they should be able to capture similar photographs.

That said, the iPhone SE 2020 camera does get some software-based upgrades like Smart HDR thanks to the newer A13 Bionic chipset. It also supports Portrait Mode and Portrait Lighting effect, which are missing on the iPhone 8. But these minor upgrades may not justify spending roughly Rs 3,500 more to get the iPhone SE 2020.

This point will likely draw polarising opinions, but it should be mentioned nevertheless. The iPhone 8 is the last model from Apple to offer 3D Touch, which some Apple fans may still prefer over Haptic Touch that was introduced with later models and the iPhone SE 2020. While Haptic Touch functions almost similar to 3D Touch, the latter is more intuitive and offers more ways to interact with the iPhone. 3D Touch is pressure-sensitive and allows you to interact with apps depending on the amount of force applied to the screen. Features like Peek and Pop gestures are possible with ‌3D Touch, but not with Haptic Feedback.