Home List Want to watch IPL 2021 in India for free? Recharge with these... 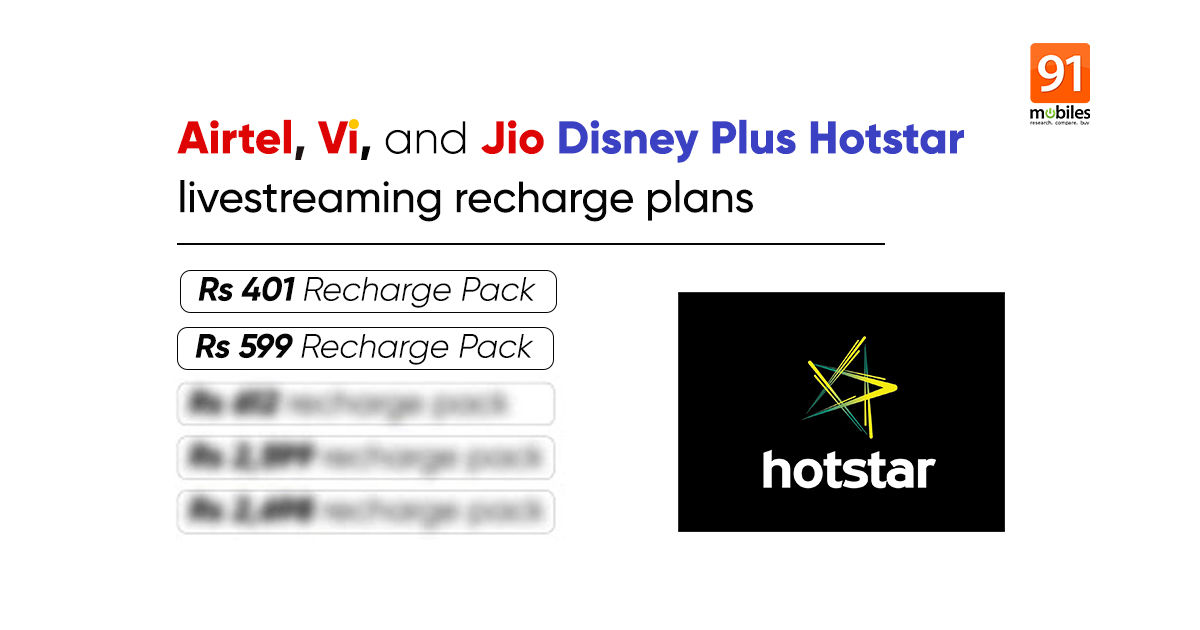 The remainder of the IPL 2021 season is scheduled to begin on September 19th in the UAE. Mumbai Indians (MI) will take on Chennai Super Kings (CSK) in the opener. This will be followed by Kolkata Knight Riders (KKR) vs Royal Challengers Bangalore (RCB). In total, 27 league matches will be played before the top four teams qualify for the playoffs. Much like the first leg in India, which was suspended due to the COVID pandemic, the second leg of IPL 2021 will also stream online on Disney Plus Hotstar live. That said, the Disney Plus Hotstar plans are set to undergo some major changes following September 1st. The Rs 399 VIP and Rs 299 Premium plans will be discontinued and replaced by Rs 499 Mobile and Rs 899 Super plans. This is likely to affect Airtel, Vi, and Jio Disney Plus Hotstar VIP plans as well.

In case, your Hotstar VIP plan is expiring or has expired, recharge your mobile number with select Airtel, Vi, and Jio recharge packs now to get the subscription for free and watch IPL 2021 online in India. Read on to find out more details:

The company hasn’t announced it yet, but Disney Hotstar VIP users is likely to enjoy the same benefits post September 1st when the new plans will come into force. The Disney Plus Hotstar new plans, which include Mobile, Super, and Premium, will offer access to all content available on the streaming platform that too in original language to all users. The plans only differ in terms of screens and resolution.

Before we get down to the best Airtel, Vi, and Jio recharge plans with Disney Plus Hotstar VIP subscription, here are a few things that you need to know:

Jio offers Disney Plus Hotstar subscription to watch IPL 2021, Wimbledon, EPL, and other live sports with a bunch of recharge packs. These include all-in-one plans that are bundled with free voice calls, unlimited data, and other benefits and add-on data packs. The Jio recharge plans are priced starting at Rs 401. They are bundled with a free subscription to Disney+ Hotstar VIP, which is worth Rs 399. While the recharge packs have a validity of their own, the subscription will last for a year. In addition to IPL livestreaming, you can watch Disney+ Hotstar VIP shows and movies, among other things with the subscription. Let’s take a look at the Jio recharge plans:

Live streaming of IPL, Wimbledon, F1, and EPL is available for Airtel customers with Rs 401, Rs 448, Rs 499, Rs 599, and Rs 2,698 recharge plans. Much like Jio, you also get a free subscription to Disney+ Hotstar VIP with the Airtel recharge plans. The plans also come with free voice calls, data, SMSes, and other benefits. Take a look:

Vi has also partnered with Disney+ Hotstar to offer a free VIP subscription that includes live sports such as IPL 2021, exclusive Hotstar Specials, movies, and more to its subscribers. The subscription is available to all Vodafone Idea prepaid users with Rs 401, Rs 501, Rs 601, or Rs 801 packs. Vi postpaid users can subscribe to Rs 499 or above to avail Disney Plus Hotstar VIP subscription and watch IPL for free.

The details of Disney Plus Hotstar new plans are as follows:

Unlike the existing VIP and Premium, the Hotstar Mobile, Super, and Premium plans offer the same the catalogue of content. Subscribers of even the most basic Disney Plus Hotstar plan will be able to enjoy the same web series, TV shows and movies in original language as the priciest plan.

Can you upgrade Disney Plus Hotstar VIP plan to new plans?

VIP users will most likely be able to upgrade to the new Disney Plus Hotstar Mobile, Super, and Premium plans after they come into force.