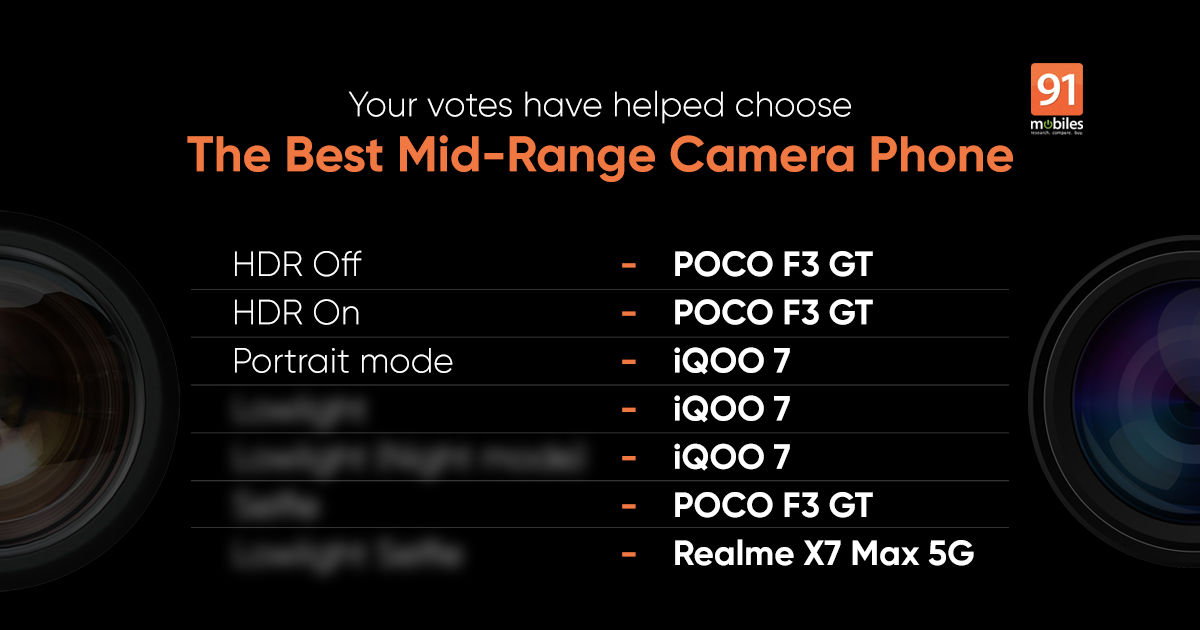 Off late, we’re seeing more and more brands launch compelling flagship killers that offer unreal performance for the price. What’s more, contrary to popular belief, most performance-first devices now ship with excellent camera setups too. To that note, we recently pit the iQOO 7 (review), the Realme X7 Max 5G (review), the POCO F3 GT (review), and the OnePlus Nord 2 (review) in a blind camera comparison to see which handset’s camera capabilities impressed our readers the most. Well, the results are in so without any further ado, let’s take a look at the winners and the losers of our blind camera comparison. 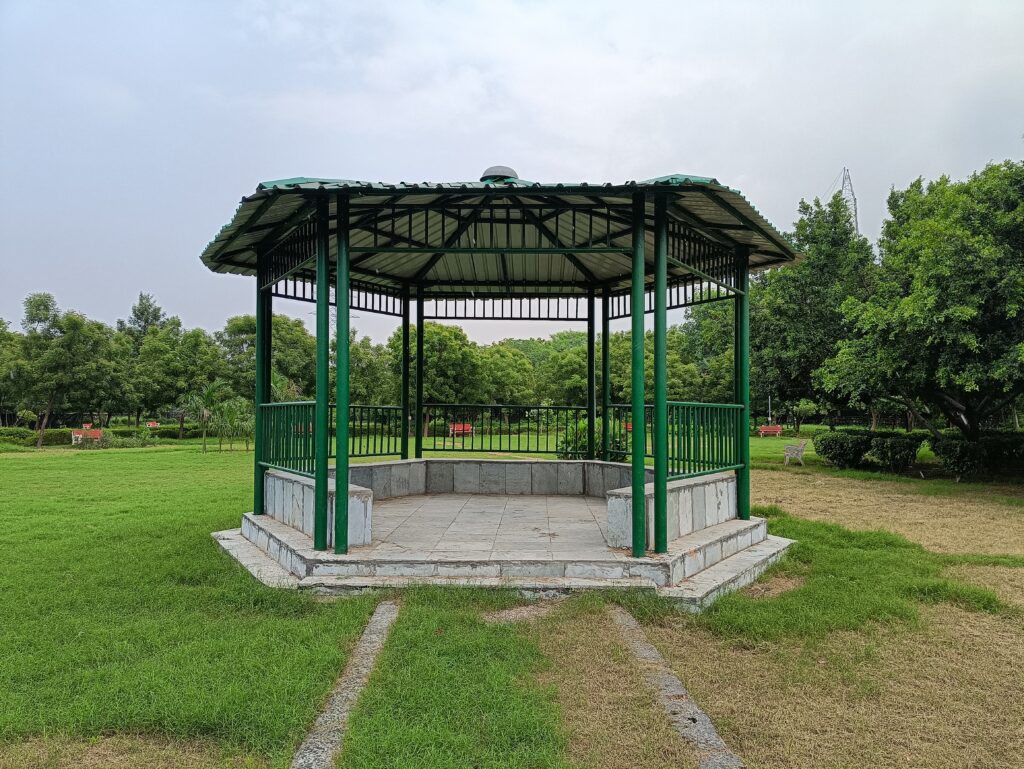 The POCO F3 GT won with flying colours (read votes) in the first comparison shot and the device amassed 44 percent of the total votes. It goes without saying that our readers liked the F3 GT’s composition the best, which can be accredited to the smartphone’s tastefully exposed shadows as well as the vibrant colours in the frame. Interestingly, the iQOO 7 failed to impress the audience, which could be in parts owing to the lack of flair in the frame. 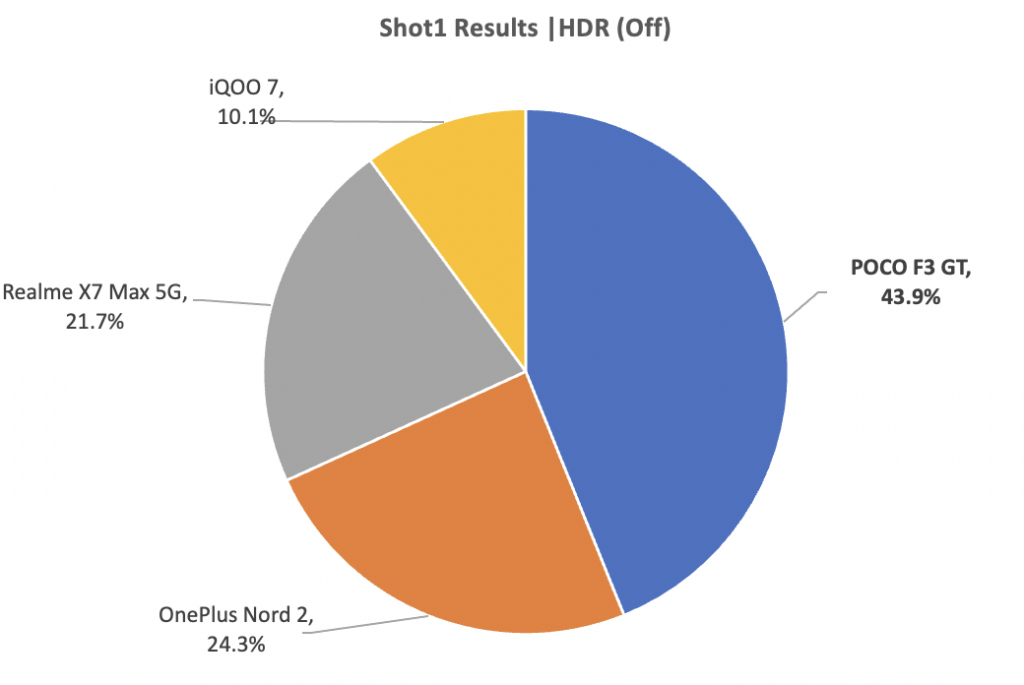 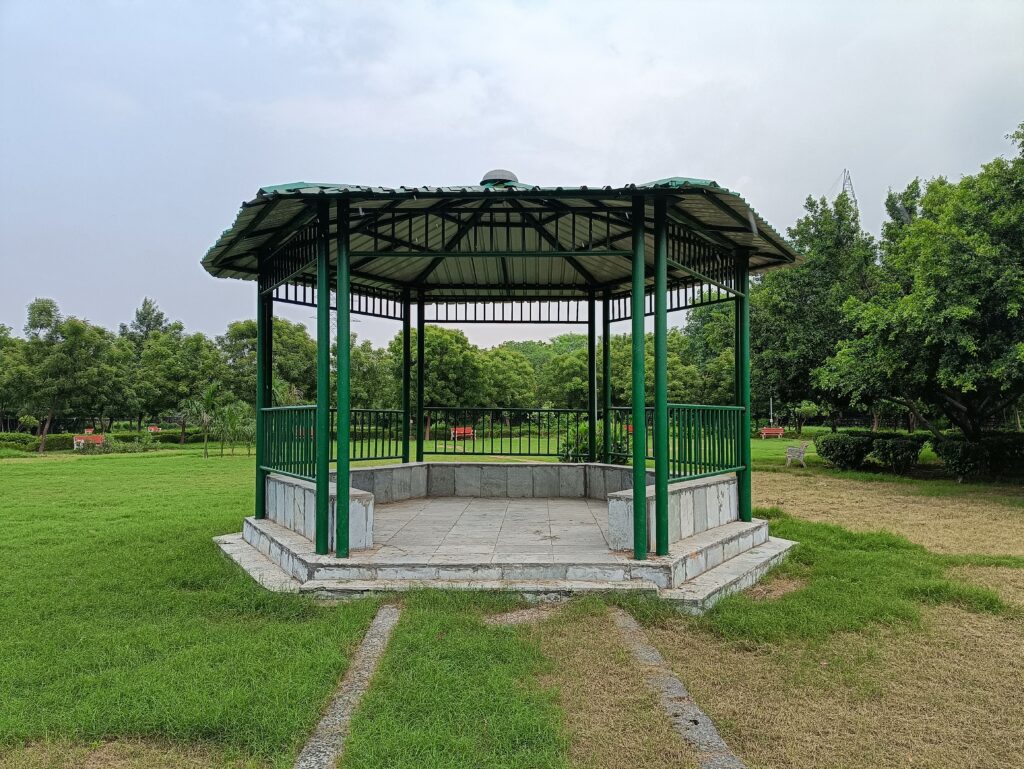 Lo and behold, the F3 GT was crowned the winner in our second comparison shot as well. That said, unlike the previous comparison photo, the POCO F3 GT had to fight tooth and nail with the Realme X7 Ma 5G to win this bout and even then, the smartphone barely edged in front by netting 40 percent of the total votes. It’s clear that our readers fancy the F3 GT’s dramatic colour science which puts forth a more contrasty image than say, what you’d get with the iQOO 7. Credit where credit’s due, the handset has managed to churn out excellent details across the frame too and be it the cloudy sky, or the lush trees in the backdrop, the F3 GT’s composition leaves little to be desired. 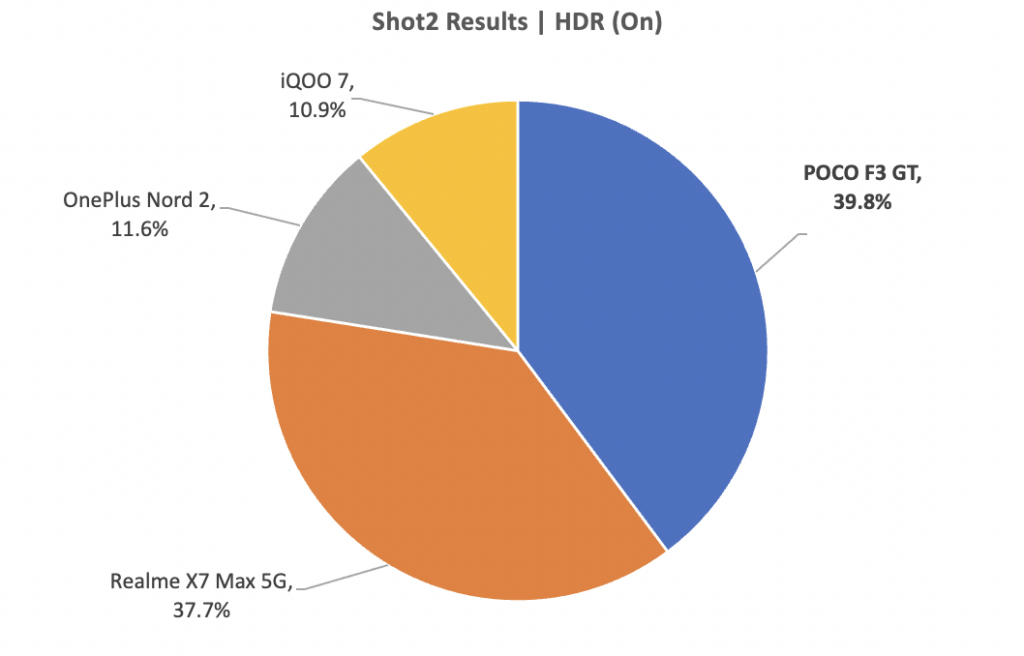 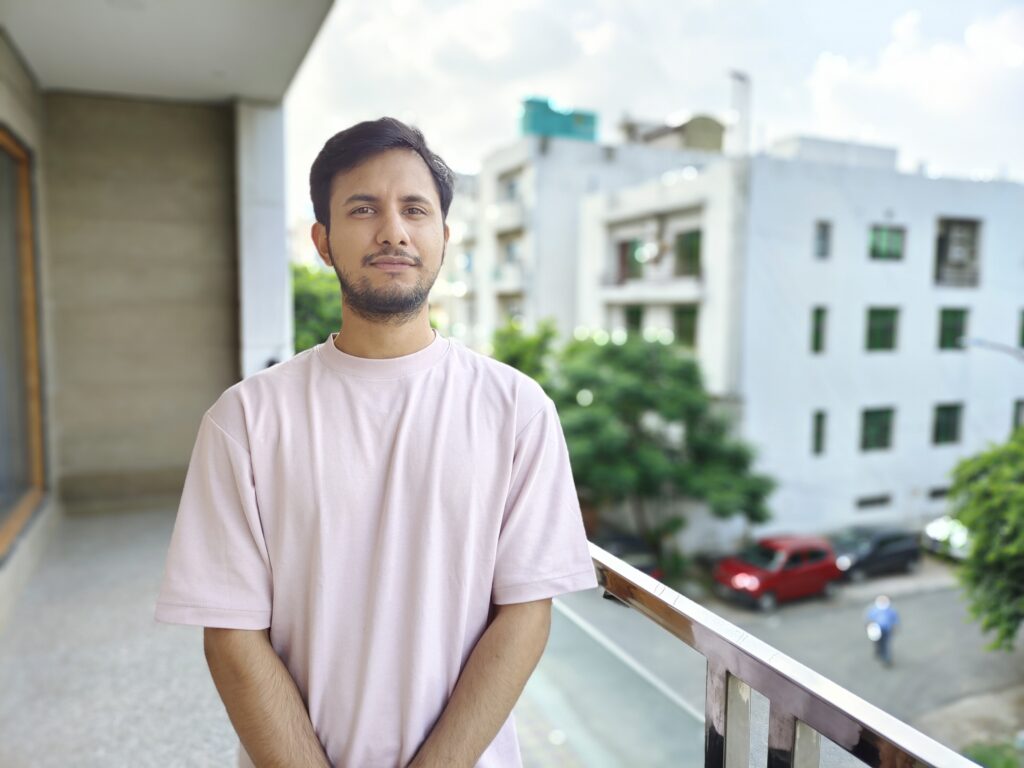 iQOO 7’s portrait shot was dubbed the clear winner by our readers, and for good reason. For one, unlike the competing photos, the iQOO 7’s composition retained the most details in the sky. What’s more, the smartphone created the cleanest bokeh effect around the subject’s face and exposed the background as well as the foreground properly. Unsurprisingly, the handset amassed 40 percent of the total votes in this comparison scenario. 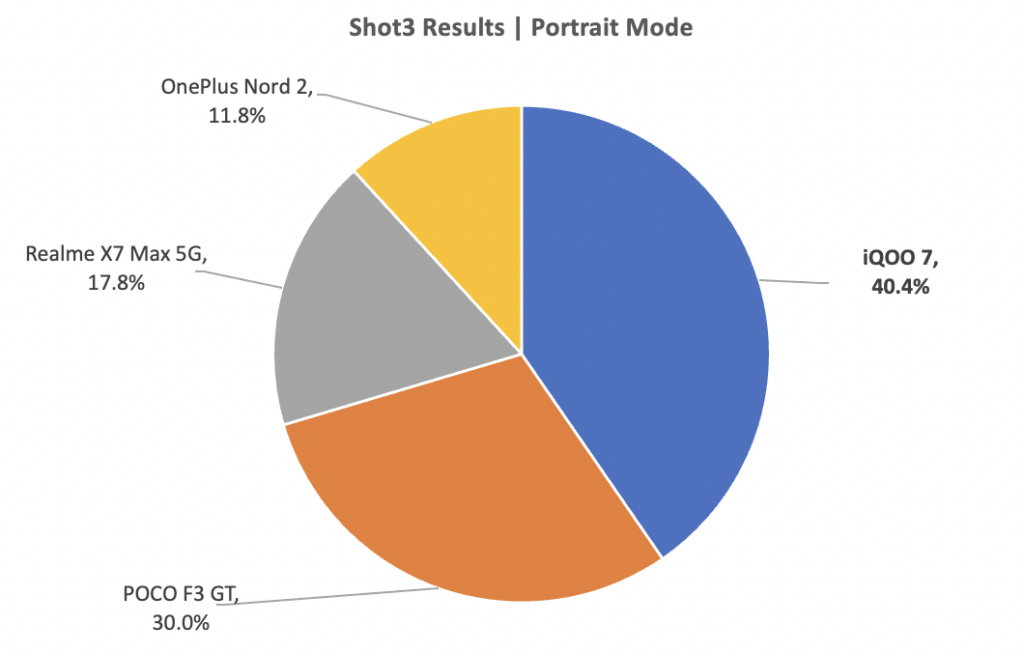 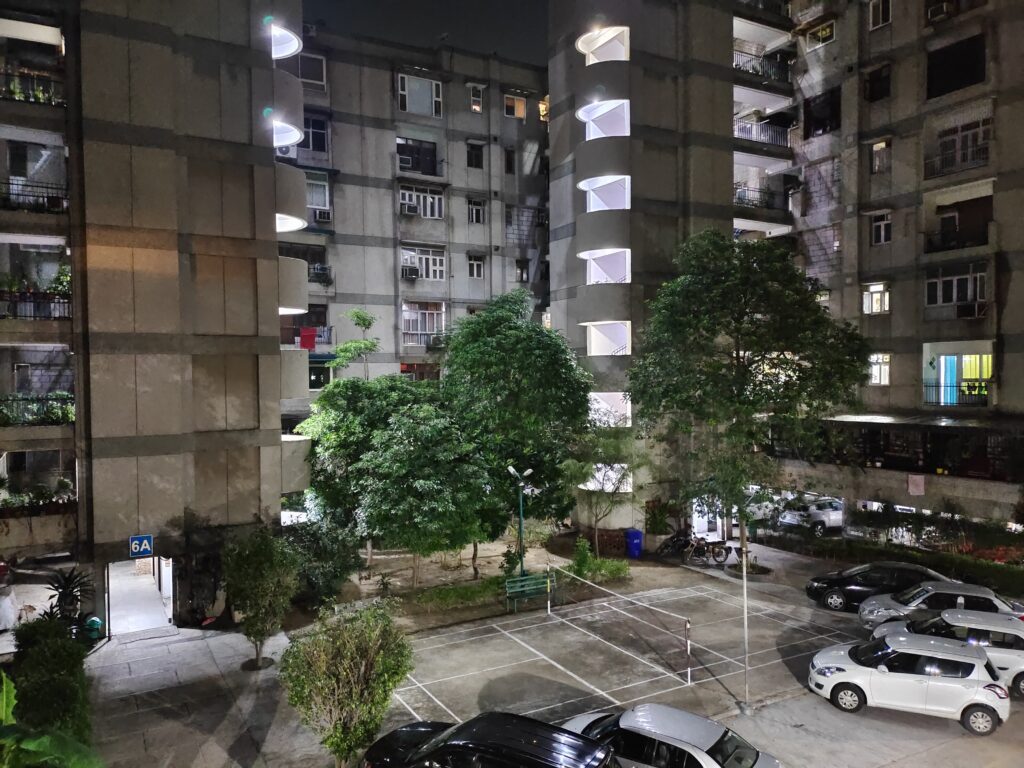 Smartphones often falter when clicking images in low light situations, but our four contenders put forth impressive images after the sun had set regardless. Of course, there can be only one winner and this time around, the iQOO 7 managed to cause an upset and the smartphone’s shot achieved over 55 percent of the total votes. As such, the handset’s image wasn’t just the brightest of the lot, but the smartphone also tackled instances of lens flaring rather well which is evident if you take a closer look at the small light bulbs near the staircase. 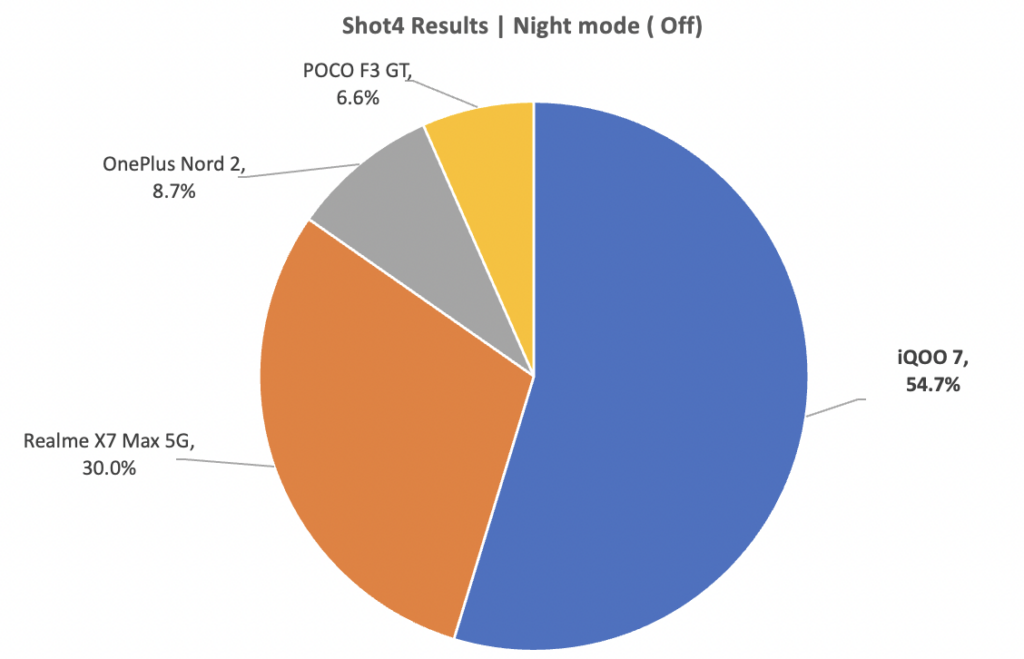 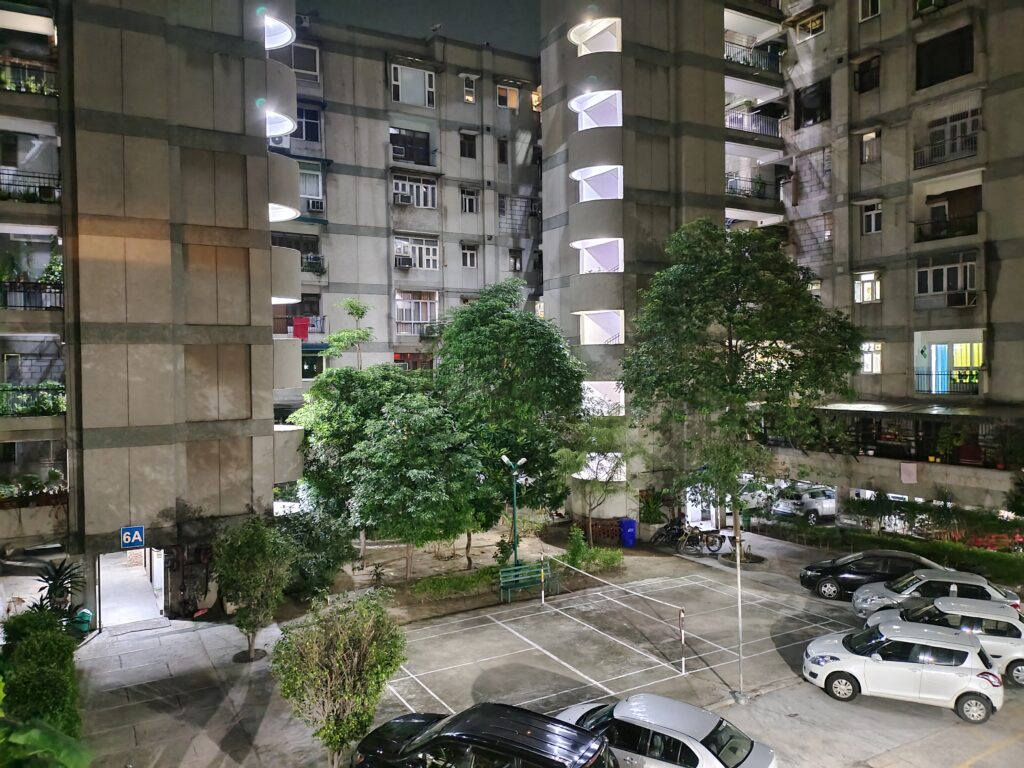 To no one’s surprise, the iQOO 7 won this bout too and might we add, by quite a margin. In fact, the handset amassed 76 percent of the total votes, which is bonkers. Regardless, the iQOO 7’s image was extremely pleasing to the eyes and the smartphone reproduced the details in the scene to a tee by outputting a well-lit scene with little to no noise in the frame. 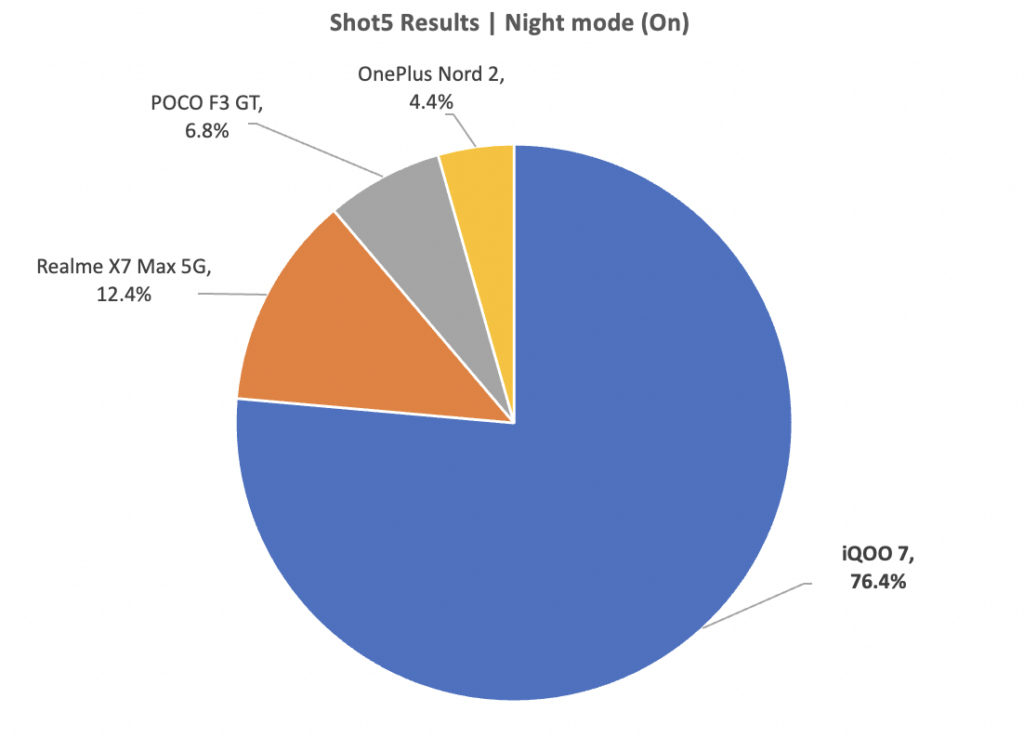 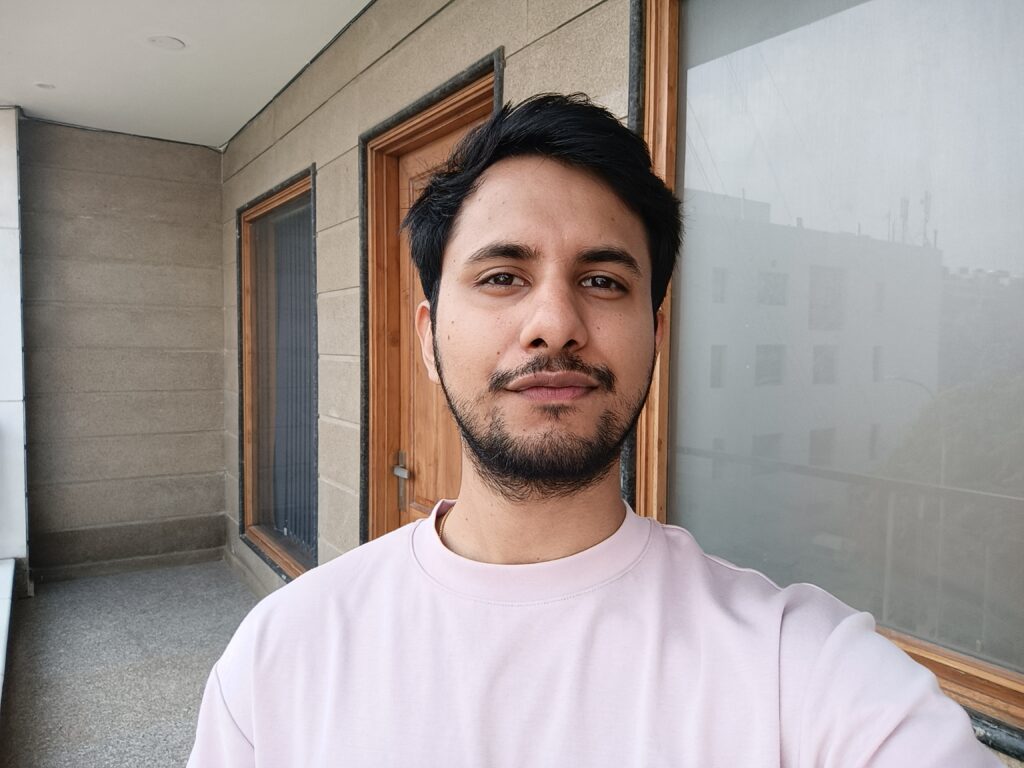 On to the front-facing snappers and here, the POCO F3 GT’s selfie camera takes the cake for selfies shot during the day with 60 percent of the total votes. Upon a closer look, it’s clear that the F3 GT’s selfie offers the sharpest details across the board and be it the subject’s beard, or their hair, the handset has done a good job retaining the details in the scene. Of course, the colours are represented better in Realme X7 Max’s shot, which came in second however, on the whole, our readers dubbed the F3 GT’s front-facing sensor to be the best for clicking self-portraits. 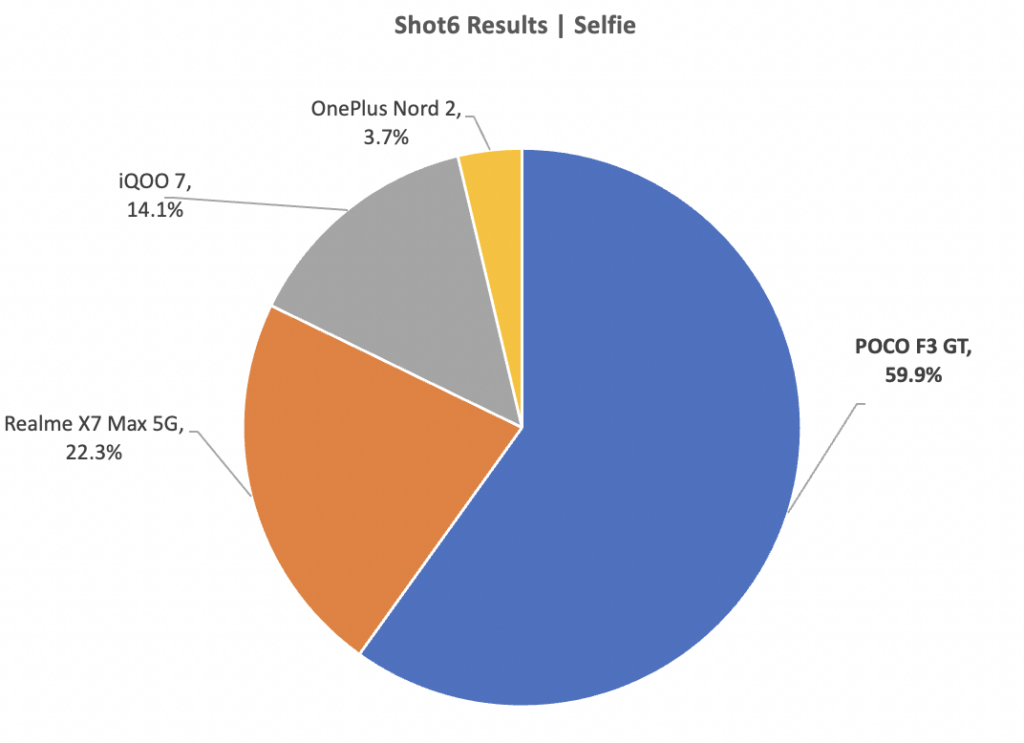 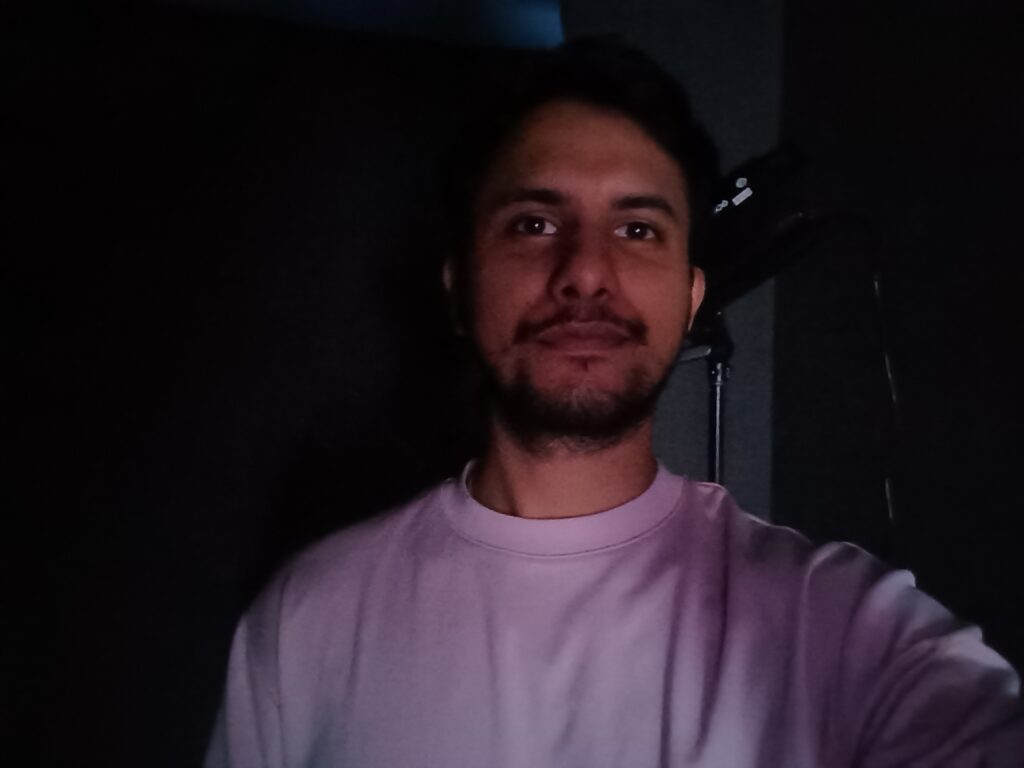 Lastly, let’s take a look at the winner of the lowlight selfie comparison shot and here, the Realme X7 Max 5G emerged as the clear winner, bagging over 93 percent of the total votes – talk about a landslide victory! As such, the X7 Max 5G’s lowlight image was the most appealing and had the most details (along with the best visibility) as well as the least noise in the frame. 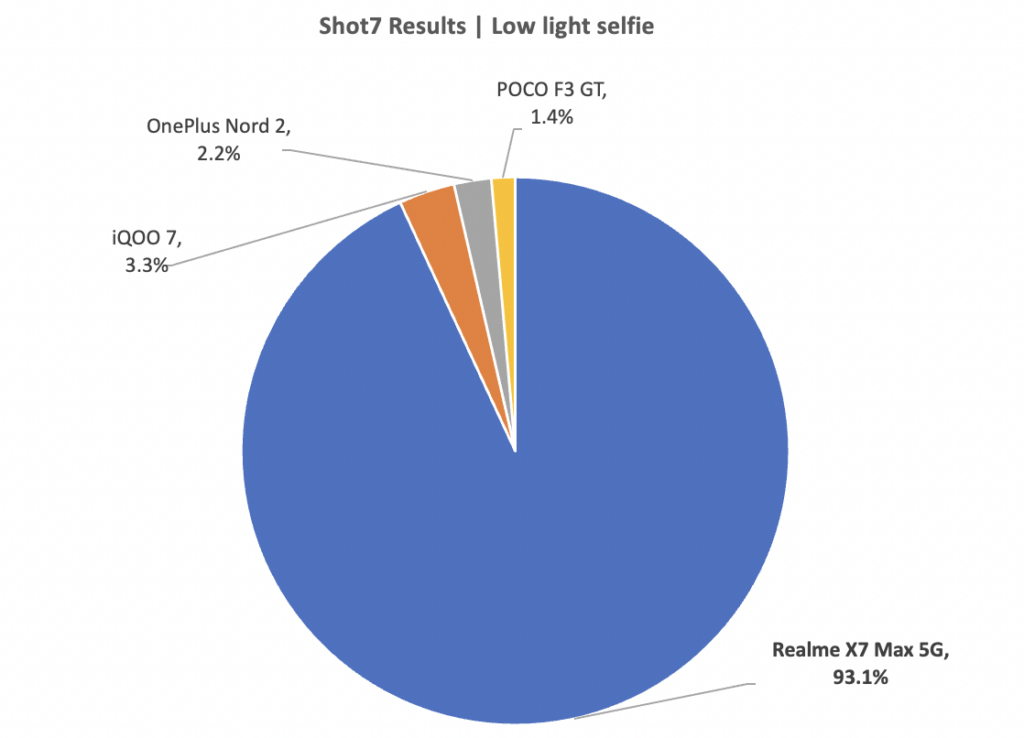 So, where does that leave us? Well, per the polling results, the iQOO 7, as well as the POCO F3 GT, won three bouts each. Interestingly, the handsets won in most, if not all the important scenarios, including photos shot in HDR, and in lowlight situations. Quite surprisingly, the OnePlus Nord 2 didn’t win even a single round whereas the Realme X7 Max impressed our readers in just one round. That’s not to say that the Nord 2 and the X7 Max are bad camera phones per se. However, it’s clear that the iQOO 7 and the POCO F3 GT have established their dominance in the sub Rs 30K segment and are among the best camera-centric phones money can buy.