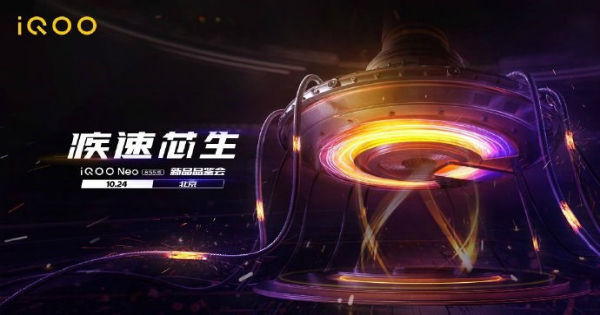 “iQOO Neo 855 is expected to come with AMOLED display, 4,500mAh battery with 33W fast-charging support and runs on Android 9.0 Pie”

Vivo iQOO Neo smartphone was unveiled back in July in China. It comes with last year’s Snapdragon 845 SoC, 4D Game Shock 2.0 technology, and a 6.38-inch Super AMOLED display. Now, the brand is gearing up to launch the iQOO Neo Snapdragon 855 variant, which could be called Neo 2, IQOO Lite, or Neo Pro, on October 24th in its home soil, China. The handset was earlier spotted on Geekbench benchmarking platform with scores of 3,516 in the single-core and 11,262 points in the multi-core test. The AnTuTu benchmark of the smartphone suggests that the iQOO Neo 855 would pack 8GB RAM and 256GB internal storage, runs Android 9.0 Pie with a custom interface, and has a display resolution of 1,080 x 2,340 pixels.

Furthermore, the iQOO Neo 855 is rumoured to come with an AMOLED display, an in-display fingerprint sensor and a waterdrop notch to accommodate the selfie snapper. It is expected to pack a 4,500mAh battery with 33W rapid charging support, as discovered from China’s 3C certification. Unfortunately, no other details and specifications of the iQOO Neo 855 have been revealed yet, but with the launch just a few days away, we should know more information soon.

As for the Vivo iQOO Neo specifications, it flaunts a 6.38-inch full HD+ Super AMOLED display with 1,080 x 2,340 pixels resolution and an in-display fingerprint sensor for security. It is powered by the last year’s Snapdragon 845 flagship SoC paired with up to 8GB of RAM and up to 128GB of storage. Talking about the optics, it packs a triple camera setup consisting of a 12MP primary snapper, an 8MP secondary shooter and a 2MP third sensor. On the front, the handset has a 12MP camera for selfies.