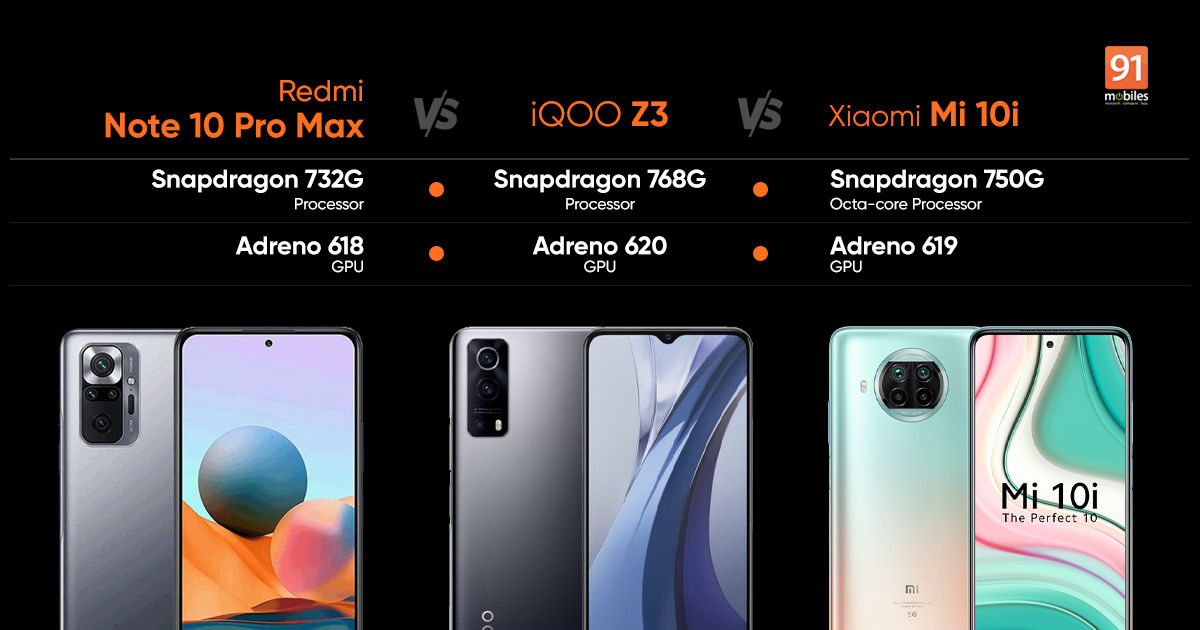 Off-late, there has been a barrage of enticing affordable phones in the market, each touting excellent cameras, high refresh rate displays, and stylish designs. That said, the area which has seen the most improvement in recent times is undoubtedly the performance of mid-range phones, which can be accredited to brand-new SoCs from the likes of Qualcomm and MediaTek. Case in point, the newly-launched iQOO Z3 that ships with Qualcomm’s 5G enabled Snapdragon 768 processor. 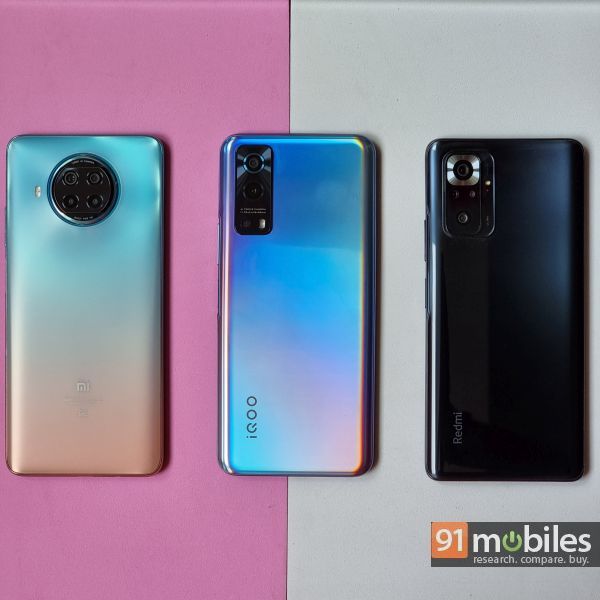 Of course, the question on everyone’s mind is – just how good is the new Snapdragon 768 chipset and does it warrant a purchase over devices like the Redmi Note 10 Pro Max (review) and the Xiaomi Mi 10i (review) that feature Qualcomm’s Snapdragon 732G and 750G SoCs respectively? Well, if you are finding yourself in a similar rut then fret not as in this article, we will be putting all your doubts to rest. Read on to know which of the three SoCs offer the best performance for your buck.

Benchmarks rarely tell the whole story, but they do help users ascertain or at least get an idea of a smartphone’s computing prowess. To that note, let’s kick off this performance comparison by running a slew of synthetic tests, including Antutu v9, GeekBench v5, and GFXBench. Starting with the Antutu benchmark, we deployed the latest version of the synthetic test (v9) on all three phones which offers more GPU tests compared to the previous iteration of the software. The utility also factors in a phone’s storage and RAM, alongside its 2D and 3D graphics performance before outputting a score, and consequently, is a solid tool to get a gauge on a phone’s overall computing prowess.

Unsurprisingly, the Snapdragon 768-toting iQOO Z3 absolutely obliterated the competition and outputted a score of 4,52,594 points in the first run. In comparison, the Xiaomi Mi 10i with its Snapdragon 750G scored 3,78,559 points, while the Redmi Note 10 Pro Max found itself at the tail end of this comparison with a score of 3,26,764 points.

Clearly, both the iQOO Z3 as well as the Xiaomi Mi 10i operate admirably under sustained loads, but the Redmi Note 10 Pro Max’ performance throttled quite a bit. We’ll further substantiate this in the subsequent section, but for now, let’s take a look at the devices’ GeekBench score. 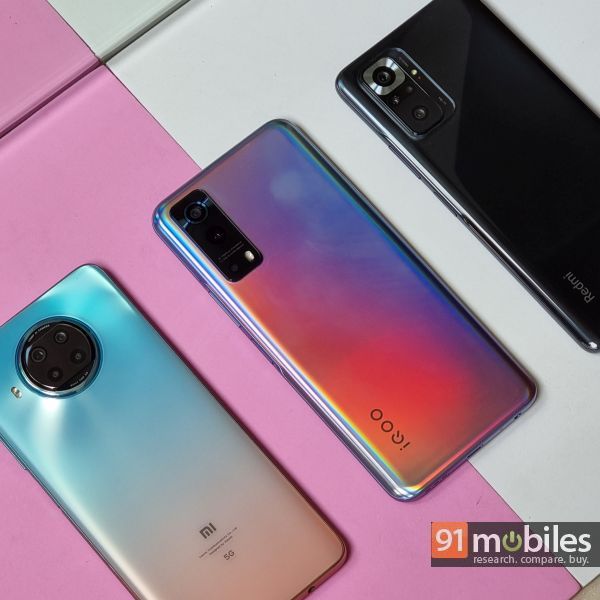 Coming to the scores, the iQOO Z3 outputted the highest single-core and multi-core numbers amounting to 717 and 2,039 points respectively. The Mi 10i came in second and offered single-core and multi-core scores of 614 and 1,721 points respectively. Lastly, the Redmi Note 10 Pro Max offered a higher multi-core score of 1,784 points compared to the Mi 10i, albeit fell shy by a couple of hundred points in the single-core tests and produced just 567 points. Clearly, the iQOO Z3 offers the best CPU performance amongst the three smartphones, followed by the Mi 10i and the Redmi Note 10 Pro Max.

As prefaced previously, the Redmi Note 10 Pro Max showed noticeable dips in its Antutu benchmark scores after three consecutive runs of the synthetic testing app. It was clear then that the handset was exhibiting CPU throttling, which was further substantiated by our CPU Throttle test. Here, going by the graphs alone, you can tell that of the three phones, the Redmi Note 10 Pro Max struggled the most to sustain its peak performance (as indicated by the green zones).

With the synthetic benchmarks out of the way, let’s take a look at how the Redmi Note 10 Pro Max, the Xiaomi Mi 10i, and the iQOO Z3 stack up in terms of gaming. To do so, we tested all three phones with the popular PvP, Battle Royale shooter Call of Duty Mobile. Interestingly enough, all three phones ran the game at the same presets, with the trio maxing out at Very High graphics quality and Very High frame rate. That being said, we did run into more stutters on the Redmi Note 10 Pro Max as opposed to the other two devices.

The same was evident in CQC maps like the shipment wherein, a chaotic gunfight would erupt in a very small area, contributing to the frame drops on the Note 10 Pro Max. That said, all three phones remained cool to the touch even after 45 minutes of continuous gaming, which is great.

Our three contenders also draw parallels in the storage department. Not only will you get support for expandable storage on all three handsets, but you can also pick up each of the three phones with up to 128GB of UFS 2.2 storage. That said, we noticed that the app load times were slightly longer on the Redmi Note 10 Pro Max. Our findings were further corroborated in the AndroBench benchmark, wherein, the smartphone outputted the slowest read and write speeds too.

While a smartphone’s performance is predominantly dependent on its SoC, a quality display and audio setup go a long way in ensuring a satisfying end-user experience. To that note, the Redmi Note 10 Pro Max takes the cake as it is the only phone amidst the three mid-rangers to ship with an AMOLED screen. The display is further bettered by a tiny, unobtrusive punch-hole notch, along with a responsive touch sampling rate of 240Hz and a peak brightness of 1,200 nits. The Mi 10i comes in second with its 120Hz LCD screen that also touts a punch-hole notch and a touch sampling rate of 240Hz. The iQOO Z3, on the other hand, offers a rather chunky waterdrop notch along with a slower touch sampling rate of 180Hz. Both, the iQOO Z3 as well as the Mi 10i offer a peak brightness of just 450 nits as well. Consequently, you can expect the display on the Redmi Note 10 Pro Max to be the brightest, most vibrant, and most responsive of the lot. 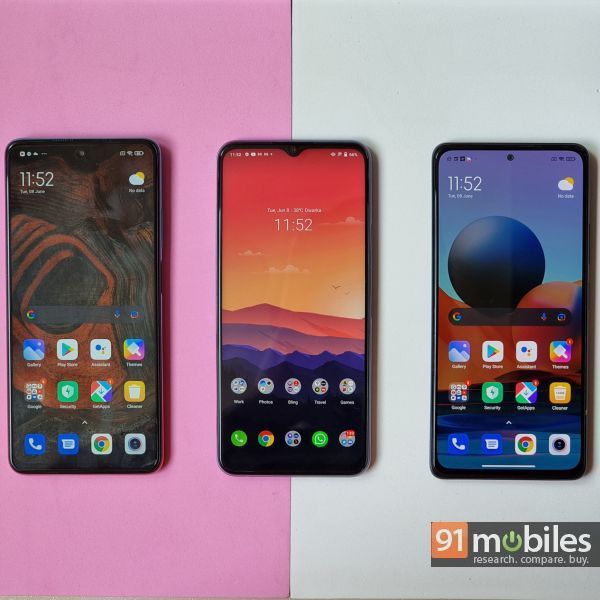 With that said, the iQOO Z3 regains its lead in the battery department as it comes with support for 55W wired charging that can top up the phone’s 4,400mAh cell in just 40 minutes. In contrast, the Mi 10i, as well as the Redmi Note 10 Pro Max, take longer to refuel their cells as both the phones ship with bigger batteries that support relatively slower 33W fast charging. 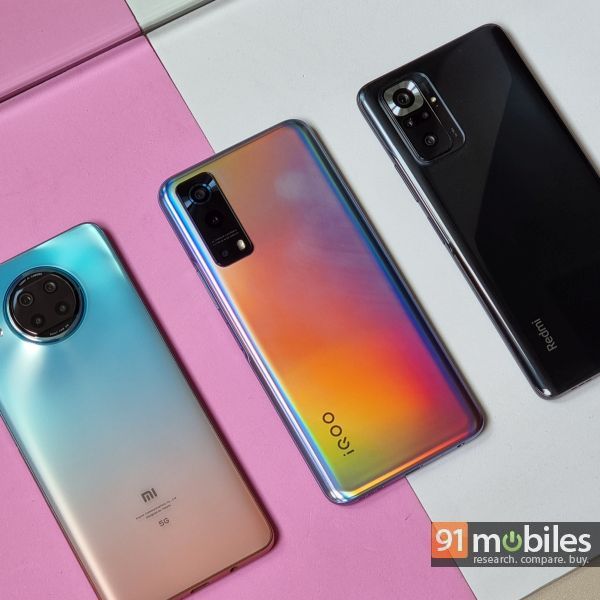 As for connectivity, all three phones offer support for both 2.4GHz as well as 5GHz Wi-Fi networks. We got similar download speeds on our Airtel postpaid SIM on all three phones too. That said, unlike the Xiaomi Mi 10i and the iQOO Z3, the Redmi Note 10 Pro Max’s Snapdragon 732G chipset isn’t 5G-ready. On the flip side, the iQOO Z3 and the Mi 10i, both support n77 and n78 sub-6GHz 5G bands.

Clearly, the Xiaomi Mi 10i and the Redmi Note 10 Pro Max cannot hold a candle to the iQOO Z3’s Snapdragon 768G processor. In fact, per our testing, barring the POCO X3 Pro, the iQOO Z3 offers the best performance under Rs 25K. Of course, there’s much more to a smartphone than just raw compute, and iQOO has cut some corners in the display and audio department with its latest offering. That said, the iQOO Z3 is undoubtedly a fantastic option for anyone in the market for a speedy, 5G-ready Android handset that doesn’t break the bank. Interested buyers can pick up the phone at a starting price of Rs 19,990. Do let us know which of these three phones would you buy in the comments below.