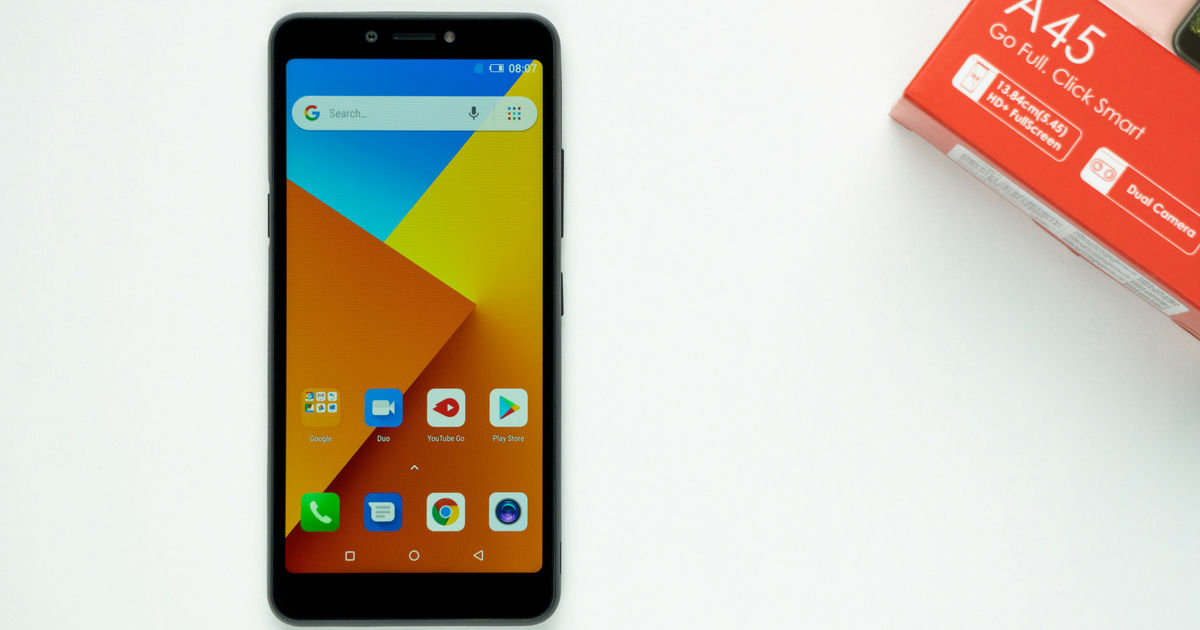 itel — a sub-brand of Transsion holdings — is known for its feature phones and budget smartphones. Just last month, the brand launched the itel A62 (first impressions) smartphone in India with a price tag of Rs 7,499. The smartphone was also the first from the brand’s stables to come with dual rear cameras. Recently, the handset maker expanded the A series of phones with the launch of A45. Notably, the latest launch is among the very few phones under Rs 6,000 to come with an HD+ display and a pair of shooters at the back. We got our hands on the new smartphone to give you our initial impressions. Read on for our first impressions of the Android Go-based itelA45. 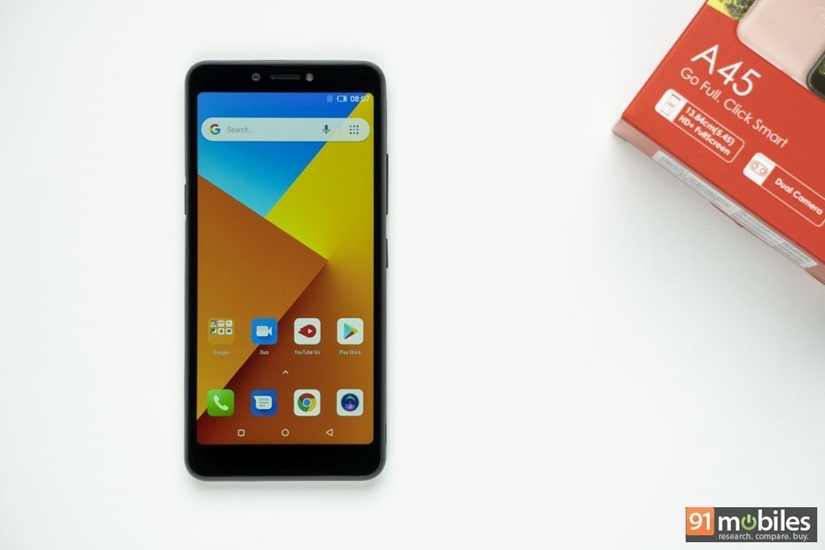 Speaking of the retail box first, the itel A45 comes in the same bright red box as we had seen in case of itel A62 (first impressions). The package has the usual graphics on top, Android Go inscription and branding on the sides. The core specs and other details of the smartphone have been listed at the bottom of the box. You will need to open the side flap of the box to slide out the nondescript white cardboard box containing the phone. The itel A45 rests atop a compartment containing the documentation, a protective case, a pair of in-ear earphones, wall charger, and micro-USB cable. We certainly liked the bright red and black colour of earphones, which makes them look distinctive. 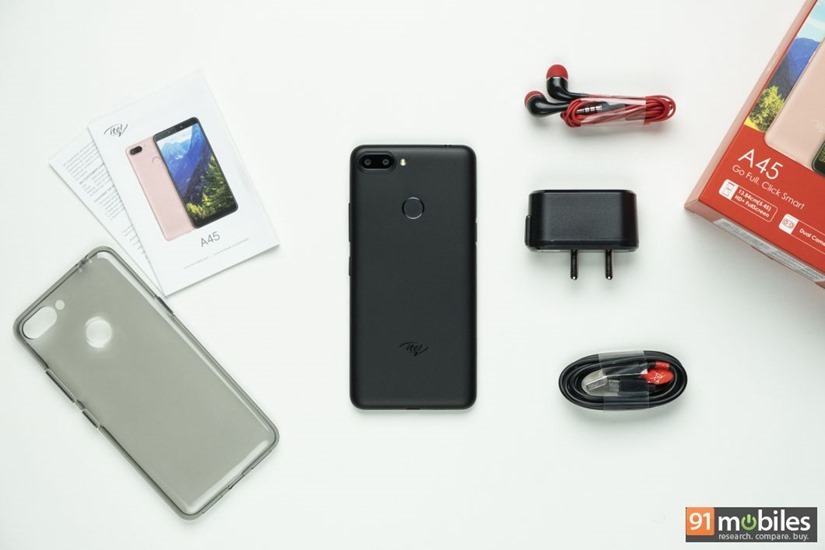 The itel A45 comes with a polycarbonate chassis featuring a unique matte finish that feels soft to touch. The sides of the phone are chamfered, which makes it comfortable to hold. On the front is the 18:9 display with a selfie camera, dedicated LED flash and an earpiece. Flipping the phone, you will see the dual camera module with LED flash in top left corner, fingerprint scanner towards the centre and the itel branding at the bottom edge. The brand has placed the volume buttons on the right edge, power button on the left spine, a 3.5mm audio socket up top and a micro-USB port along with loudspeaker at the bottom. To insert SIM cards and a microSD card, you will have to remove the back panel.

The 5.45-inch, 18:9 display on the itel A45 comes with a resolution of 1,440 x 720 pixels and produces sharp text as well as decent colours. The viewing angles are good and itel has added an option of Sunlight display in the settings, which makes the display super legible under direct sunlight. We also liked the fact that there are no black bands running around the screen, which makes the experience of reading content and watching movies better.

Powering the A45 is a 1.3GHz MediaTek MT6739WA SoC backed by a gig of RAM. The phone runs Android 8.1 Oreo (Go Edition) with the Go suite of Google’s apps. The combination of decent hardware and optimised software helps in good performance, though we did experience jarring animations every once in a while. The storage is 8GB, of which around 4.85GB is available to the user. A 2,700mAh battery keeps the package running. 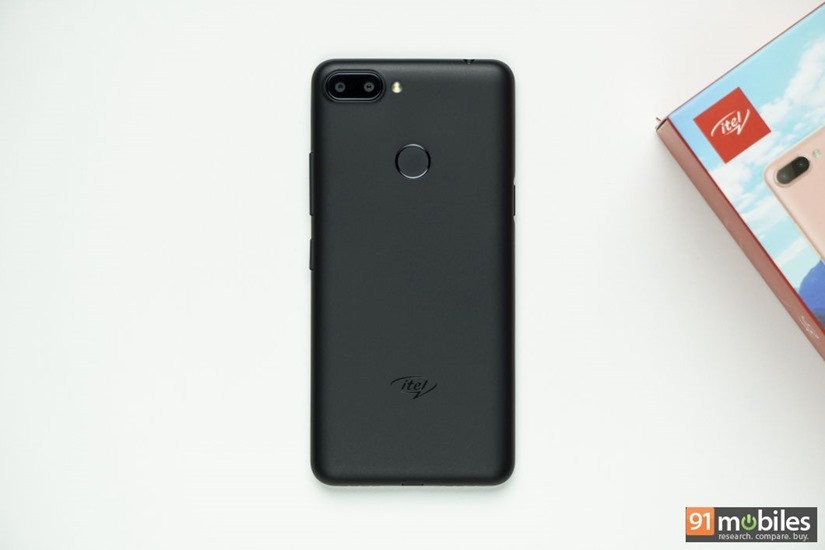 In the imaging department, you get a 5-megapixel + 0.3-megapixel setup on the back and a 5-megapixel selfie shooter on the front, both with LED flash. The camera app is quite standard with preview, shutter button and video toggle at the bottom and HDR, flash, timer, liver filters, and selfie camera toggle on the top. You also get the beautify mode with a slider to set the intensity of beautification. Swiping from top to bottom on the viewfinder will switch between the rear and front camera. There is a portrait mode for the rear camera, which can be accessed by swiping towards the right on the viewfinder.

To conclude, with a price tag of Rs 5,999, you possibly can’t ask for a better deal in the segment. The phone ships with stock Android, taller HD+ display, and a dual-camera module, a combination which isn’t offered by many handsets in the sub-Rs 6k category. Add to it the fact that the itel A45 can be easily purchased from the neighbourhood retailer. That being said, the A45 does face stiff competition from the likes of the Xiaomi Redmi 5A (review) and Nokia 2.1.