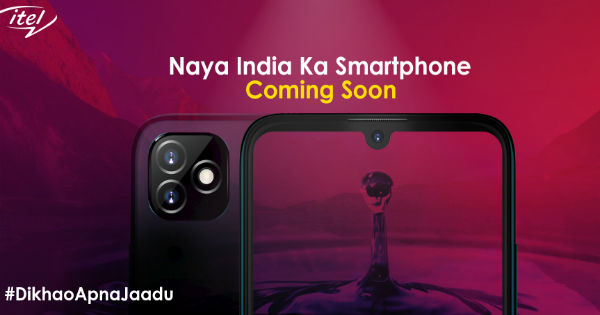 “The upcoming itel phone will be powered by an octa-core processor, sport a large display, and feature a big battery”

91mobiles has exclusively learned from industry sources that itel, a brand owned by Hong Kong-based Transsion Holdings, would be launching a new smartphone in India soon. According to a teaser image that 91mobiles has received from sources, the company is gearing up to launch a smartphone with a waterdrop notch and dual rear cameras. The dual rear cameras on the back make the upcoming itel smartphone, whose name is not known, look like an iPhone 11 clone. According to industry sources, this smartphone will launch in February. Apart from the iPhone-like design, the smartphone will offer a large display, a big battery, and an octa-core processor, sources say.

itel will be promoting the phone with taglines “Naye India ka smartphone” (New India’s smartphone) and “Dikhao Apna Jaadu” (show your magic). The company has secured over five crore customers since its launch in 2016 and claims to be the number one brand in the sub-Rs 5000 price segment.

While the exact launch date isn’t revealed, sources tell us that it could happen sometime in February which isn’t too far away and we should know more soon. When launched, the itel could take on the Redmi 8, the upcoming Realme C3 smartphones. While the former has Snapdragon 439 SoC, the latter is confirmed to ship with the MediaTek G70 SoC. Both of them have dual-rear cameras and bigger batteries.