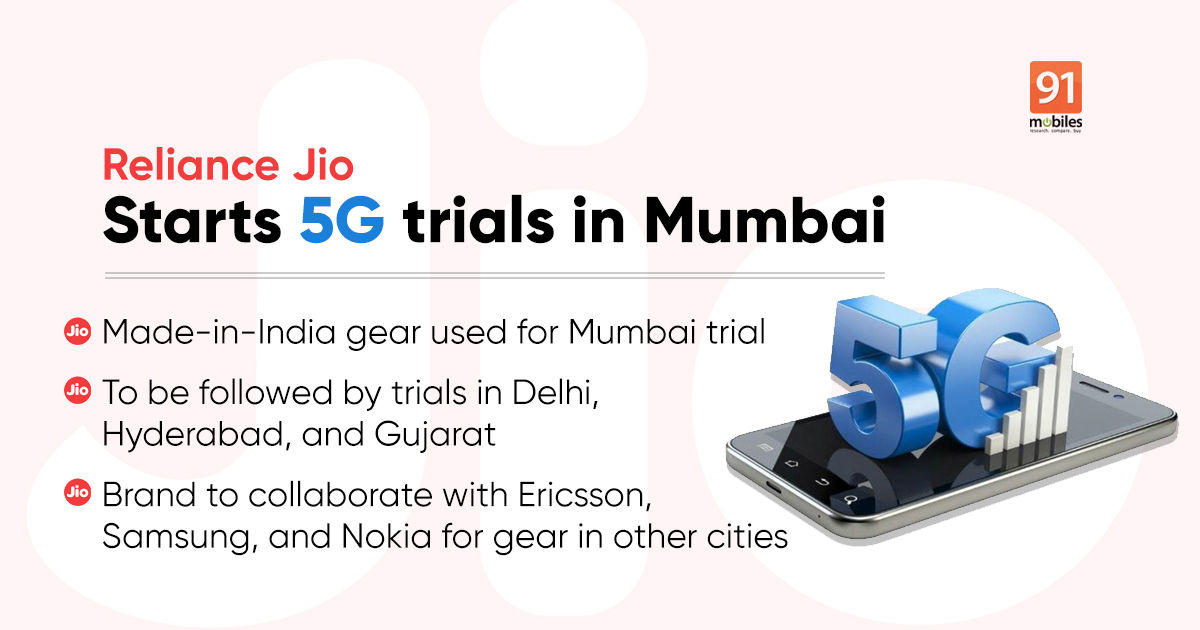 Just yesterday, we saw an Airtel 5G network field-testing video, with speeds hitting up to 1Gbps download speed and up to 100Mbps upload speed. While these speeds are nothing short of impressive, market leader Jio has opened its own 5G field testing in Mumbai, one of the first places that will get the technology. According to ET Telecom, Jio is using hardware that it developed on its own for the Mumbai 5G field trials. For Jio 5G trials in other cities, which are expected soon, the company will be using gear made by Ericsson, Samsung, and Nokia.

Jio used a mix of mid (sub-6GHz) and mmWave trial spectrum for the field test in Mumbai. However, it is not clear what speeds Jio achieved with the 5G test on made-in-India gear. It has also applied for trials in Delhi, Hyderabad, and Gujarat. Rival Airtel, on the other hand, has 5G spectrum in Delhi-NCR, Mumbai, Kolkata, and Bengaluru.

In the Gurgaon 5G field trial, Airtel managed to hit peak speeds of 1Gbps, although it is not clear which technology was used. Given the rarity of mmWave radios on most 5G smartphones sold in India, we’re probably looking at a sub-6GHz network. It is still significantly faster than anything 4G has to offer though. However, 1Gbps speeds will be rare to see in congested cities in India, especially considering the population density. Nonetheless, real-world 5G speeds should still outstrip the 4G network speeds we are used to.

While field trials are an indicator that the technology is ready to go out and about to the general public, it will be at least a year or two before 5G becomes widely available across India. Telecom operators can technically use existing 4G infra for 5G, but that is limited to only a few bands. TRAI (Telecom Regulatory Authority of India) is yet to hold auctions for the 5G spectrum too. Furthermore, 5G speeds fluctuate significantly with signal strength, so rolling it out in crowded urban hellscapes such as Mumbai may prove to be quite a challenge.