91mobiles.com
Home Feature Jio, Vi, and Airtel eSIM explained: What is it, how to activate...
Highlights 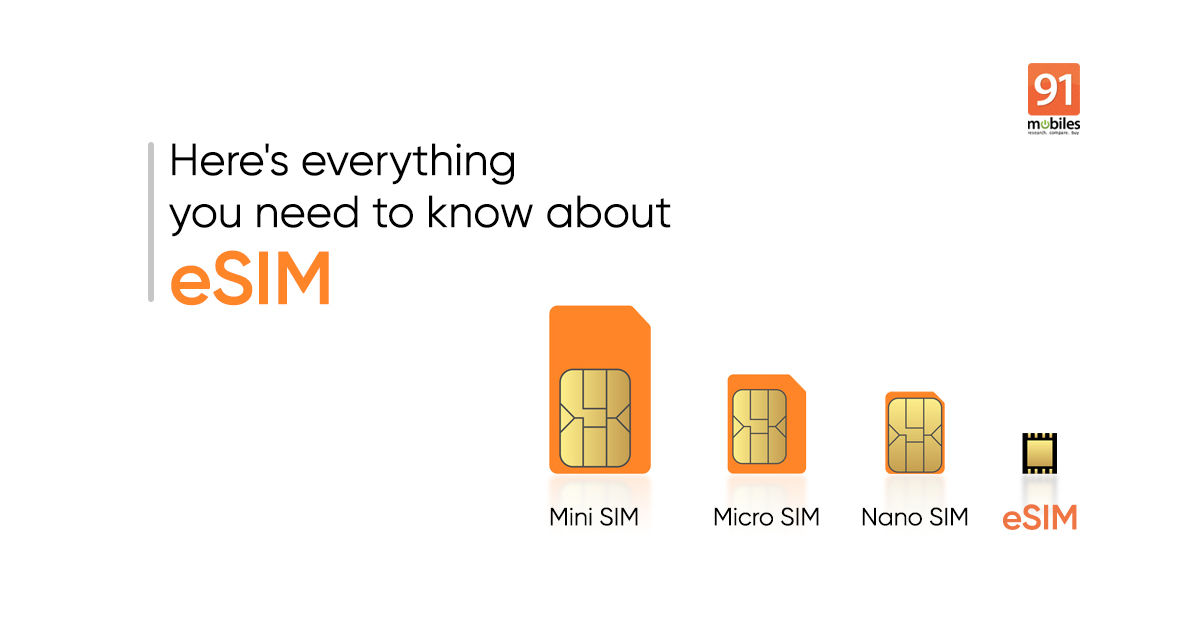 We’ve seen the mobile SIM card descend in size over the past few years. From mini, the SIM moved to macro, followed by nano. Going forward, the physical SIM card could vanish and be replaced by eSIM aka embedded SIM card. Devices supporting eSIM have been in the market for a while now, though still in limited numbers. It’s only a matter of time before OEMs start launching more devices such as smartphones, smartwatches, tablets with eSIM support. What is eSIM? What eSIM-supported phones/ devices are available in India? How to activate eSIM and can you port regular SIM to Jio, Vi, and Airtel eSIM? These are some of the questions we look to answer today.

eSIM or an embedded SIM is a programmable SIM card that is embedded into a phone, a smartwatch, or any other connected device. The eSIM stays on the device and cannot be physically pulled out or swapped like a physical SIM card. The embedded SIM, however, needs to be supported by your carrier or network to work. Having said that, you would not find any real-world difference between the service of eSIM and a regular physical SIM. Both authenticate your identity to a carrier or network to make calls, send SMSes, and use the internet using its towers. Additionally, eSIM supports all the regular networks such as 4G/ 5G, much like the regular physical SIM.

You may be wondering that since the eSIM isn’t swappable, will it be locked to just one network? Thankfully, no. An eSIM is portable. The technology is rewritable and supports multiple accounts, meaning you can easily switch to a new network or carrier.

In addition to iPhone XR and XS series, the eSIM support in India is available on the following devices

Barring smartwatches and Moto RAZR flip phone, you’ll find a slot for a regular SIM on other eSIM-supported devices. Motorola RAZR is the first completely eSIM-only phone out there. Outside India, you may find eSIM support on a handful of Samsung Galaxy smartphones, Google Pixel 2 series and above, Microsoft Surface Duo, and Huawei flagships.

You can’t apply, but you can convert your physical SIM card to an Airtel eSIM. It can be done from the comfort of your home, using the following steps

After this Airtel eSIM activation process will begin. Your existing SIM will continue to work during this period.

Vi eSIM is currently available to only postpaid subscribers, living in Mumbai, Gujarat, Delhi, Karnataka, Punjab, UP East, Maharashtra, and Goa regions. If you’re one of them, convert your physical SIM to eSIM with the steps listed below:

How to activate eSIM on iPhone and other devices

The activation process of Jio, Vi, and Airtel SIM is a bit different for smartphones and smartwatches.

It’s to be noted that once the activation is complete, the SIM profile on your physical SIM card will be removed and it cannot be used on any other handset.

How to transfer eSIM from one phone to another

If you’ve upgraded to a new eSIM phone, you can transfer your eSIM from your old mobile phone by visiting the service provider store. Whether it’s Airtel, Jio, or Vi store, you’ll be given a physical SIM for your eSIM. Insert it on your new smartphone and follow the above steps to convert your physical SIM into eSIM.