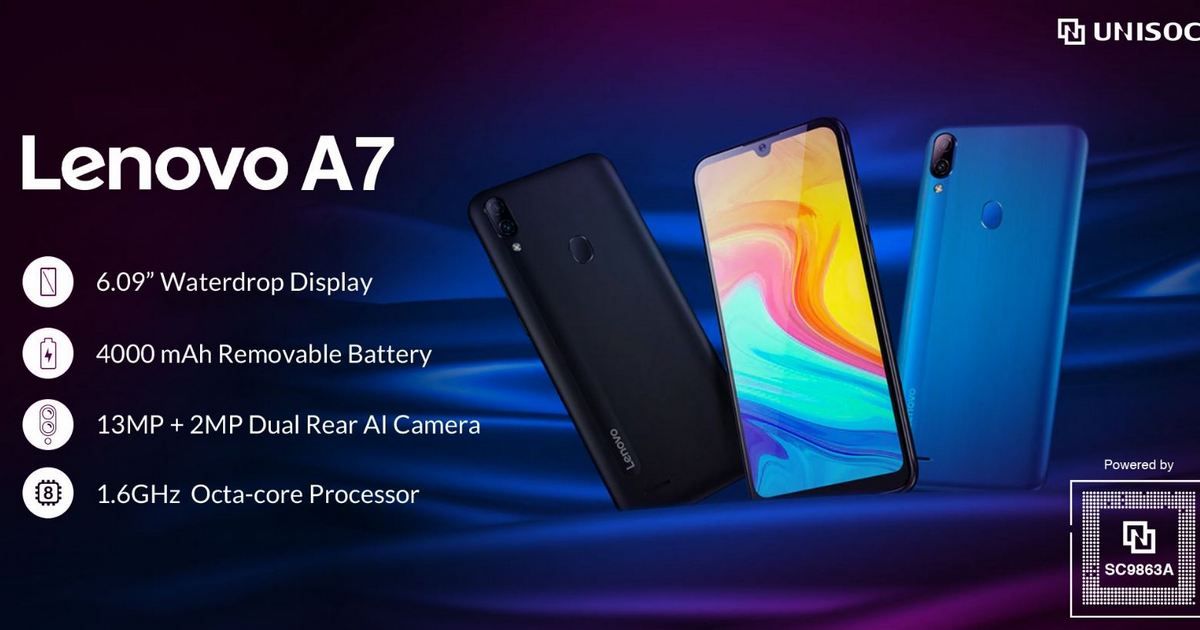 Lenovo A7 has been launched as an entry-level smartphone. The announcement has not been made by Lenovo but by Chinese semiconductor company Unisoc. This is because the Lenovo A7 is powered by the new Unisoc SC9683A chipset. The company revealed some other key Lenovo A7 specifications as well, such as its dual camera setup, battery capacity and that the phone sports a 6-inch waterdrop display. Pricing and availability of the smartphone are as of yet unknown.

The Lenovo A7 has a  6.09-inch HD+ waterdrop display with a tall 20:9 aspect ratio. The phone itself has not appeared on Lenovo’s website, but has been shared in the form of a tweet by Unisoc’s official Twitter handle. Apart from that, the phone is confirmed to house a 4,000mAh battery. Unisoc SC9683 SoC is an octa-core chipset with a base frequency of 1.6GHz. The graphics department of the processor is handled by PowerVR IMG8322 GPU.

On the back of the phone, there is a dual-camera setup. As per the tweet, the sensors have a resolution of 13MP and 2MP respectively. A previous listing of the phone, as reported by Gizmochina, had been spotted on Google Play Console which revealed that the device will have 2GB of RAM and run on Android 9.0 Pie rather than Android 10. However, we cannot confirm this as yet as the complete specifications have not been revealed yet. The resolution of the display had also been revealed to be 720 x 1560 pixels HD+ and a pixel density of 320 ppi. The front camera was shown to be of 5MP resolution. The Lenovo A7 will come in black and blue color choices.

Lenovo A6 Note first impressions: a budget offering with decent specs and features