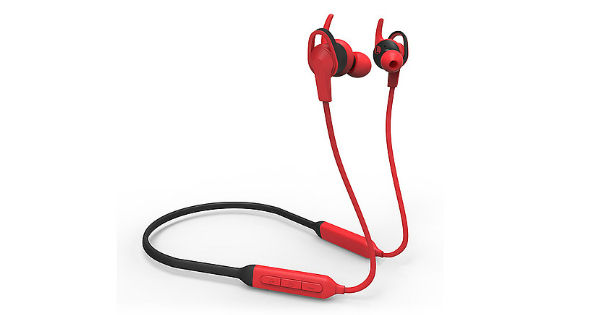 Lenovo has announced a new pair of wireless earphones in China. The Thinkplus Pods One wireless earbuds have been priced at RMB 299 (about Rs 3,000) and are currently listed on Lenovo Mall in China. The new earphones are IPX5 certified, which means that they are both water and dust resistant to a certain extent. Basically it is for protecting the gadget from sweat and water splashes during exercise. The earphones also come equipped with hooks, which help them remain in place even during rigorous movements. And for catering to different ear sizes, Lenovo is providing hooks in multiple sizes with the pack. Thinkplus Pods One wireless earphones come with Bluetooth 5.0 support and a 100mAh battery, which according to Lenovo can run for at least 10 hours. There are two colour options available, namely black and red, but both have certain accents of the other colour on them, as can be seen in the image above. The ear hooks of black colour variant have red accents, while the neck band of the red variant is coloured black. Sadly there’s no information regarding its international release.

Lenovo recently also refreshed some of its ThinkPad laptops and ThinkPad Yoga 2-in-1s with Intel’s refreshed 8th Gen Whiskey Lake CPUs. Falling in the budget category, both the ThinkPad L390 and ThinkPad L390 Yoga have gone on sale in the US for a starting price tag of $659 and $889 respectively. And again there’s no information regarding their India release.