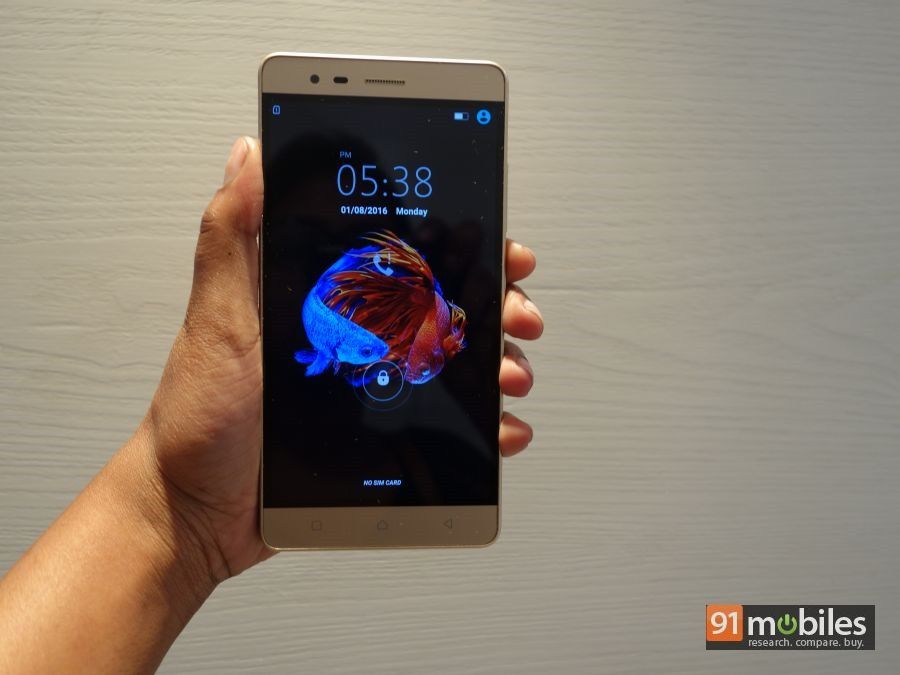 “The K5 Note aims to correct the mistakes made by its predecessor, and at the same time, combat the excellent choices that are available in its segment”

Chinese giant Lenovo has found immense success with its K series of devices, better known as the ‘Killer Note’ range. The Lenovo K3 Note (review | FAQs) tasted blockbuster success, and was one of the most popular phones in terms of user searches on 91mobiles last year. Its successor K4 Note (review) also managed to be quite popular. However, unlike the K3 Note, which was a clear choice in the sub-Rs 10k segment, the K4 Note faced stiff competition from the likes of the Xiaomi Redmi Note 3 (review) and LeEco’s budget options, the Le 1s (review) and Le 2. Aiming to turn the situation in its favour again, the brand has today launched the VIBE K5 Note in the Indian market, which goes all out in terms of the specs on offer, while keeping the price tag competitive. 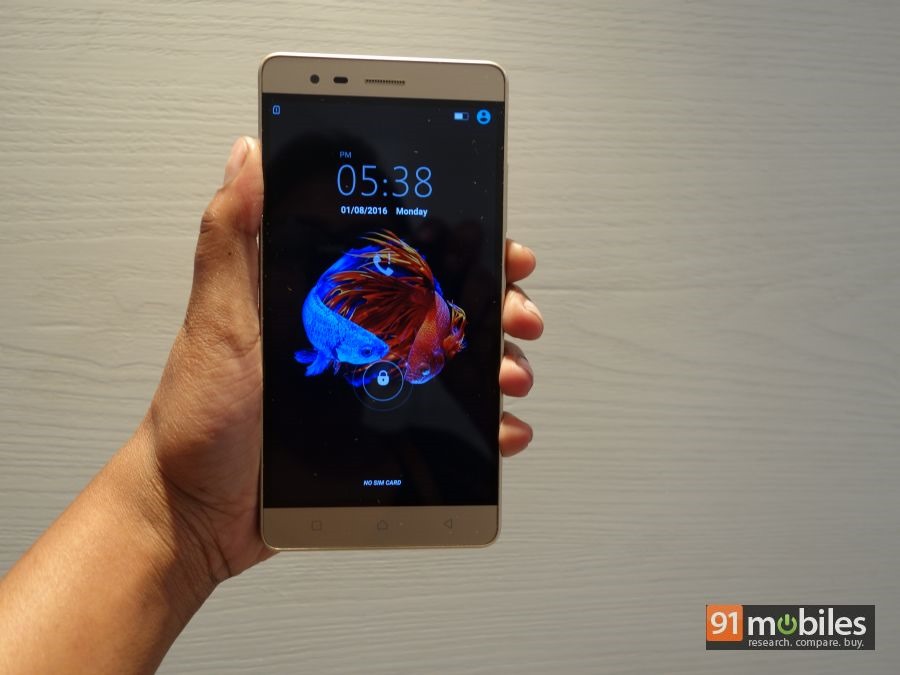 In fact, on paper, it seems to be the best option your money can buy for Rs 11,999. While our review will gauge its worthiness as a daily driver, for now, let’s take a look at what the Lenovo VIBE K5 Note brings to the table.

The first change you’ll notice when you see the VIBE K5 Note is that the brand has ensured that it looks as premium as possible. Gone is the plasticky build available in its predecessor, and instead, you get a smartphone that’s constructed entirely out of metal. Although the design might seem unoriginal, as the competition also looks largely similar, we’re certainly glad that Lenovo took this step as the metal body offers a classy appeal and feels sturdy in the hand as well. The phone catches attention in various hues of gold, silver or grey. 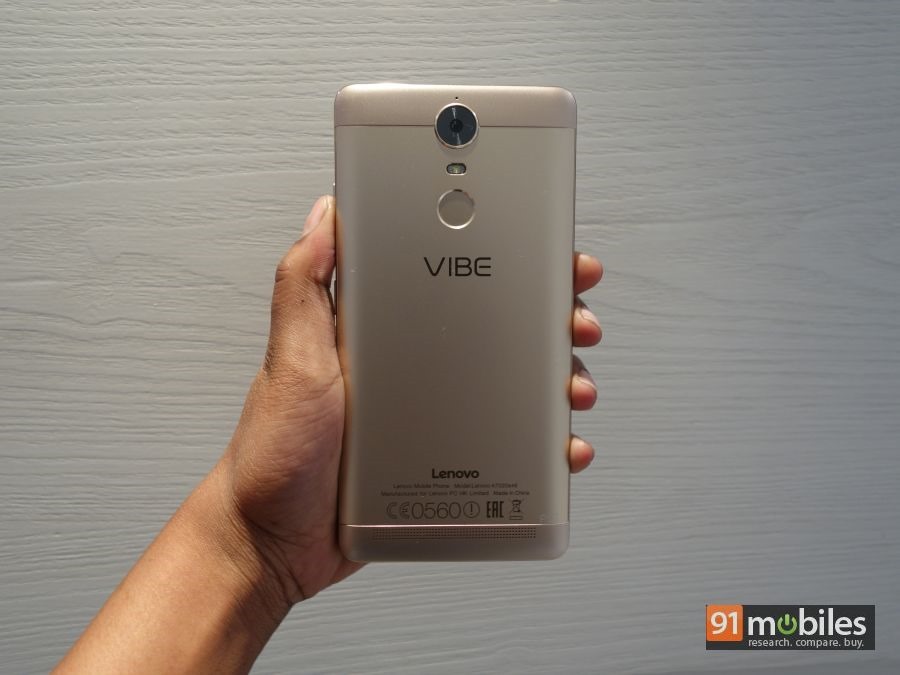 The Lenovo VIBE K5 Note also manages to fit in the hand well, even with its phablet-grade display measuring 5.5-inches. This is partly due to its slimmer (8.4mm vs 9.15mm) and slightly lighter (152g vs 160g) body, in comparison to the K4 Note. If you have large hands, then you won’t have any issues while reaching the corners of the screen. Sadly though, the metallic build is extremely slippery.

Dominating  the proceedings at the front is the display panel, which is surrounded by extremely narrow bezels. Above the display, you’ll find the earpiece, a couple of sensors and a secondary snapper, while below, there’s a row of capacitive navigation keys. The buttons follow the usual Android layout – the first key lets you access recently-opened apps, while the centre button can jump to the homescreen and the last one allows you to return to the previous screen. 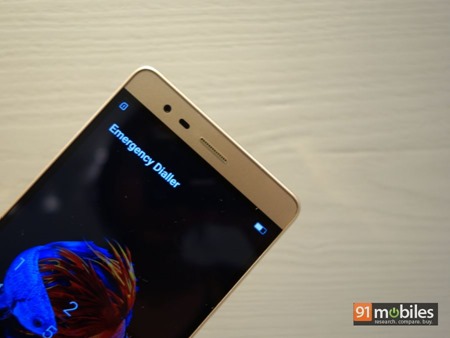 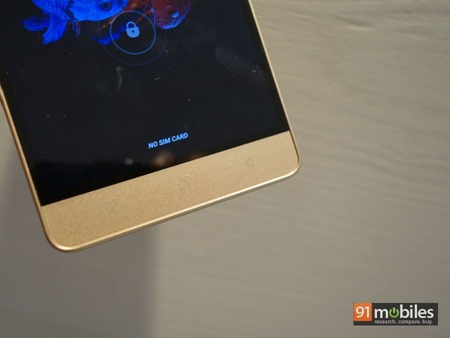 Both the power toggle and volume buttons can be found on the right, whereas the left spine is home to the ejectable tray, letting you insert a pair of nano-SIM cards. Up top lies a 3.5mm audio socket, while at the bottom, the VIBE K5 Note offers a micro-USB port. It’s interesting that Lenovo’s sub-brand ZUK has made its budget offering, the Z1 (review) future-proof by opting for the bidirectional USB Type-C port, while the K5 Note continues with the standard port. 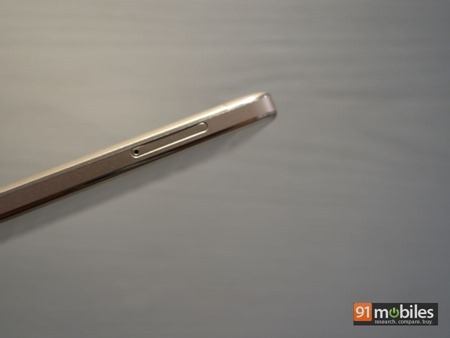 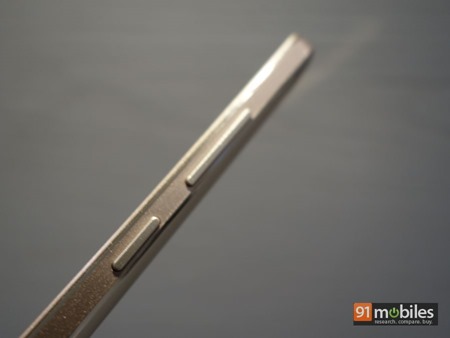 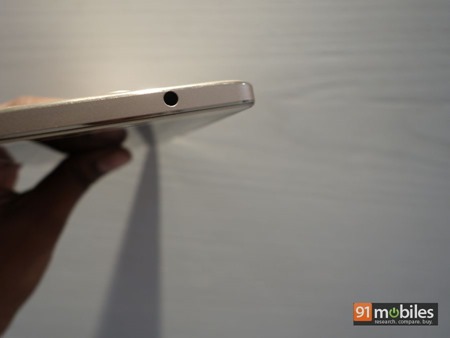 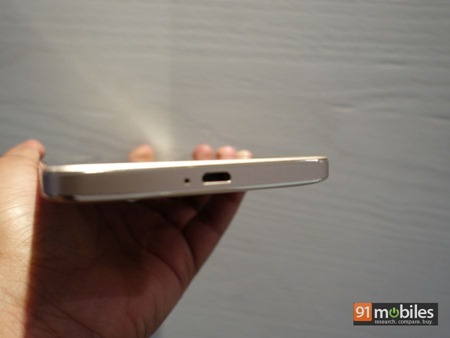 At the back, you’ll find the primary camera along with a dual-LED flash. Interestingly, the design language has been tweaked here as well – instead of a vertical fingerprint scanner, the Lenovo VIBE K5 Note sports a circular biometric module. Towards the middle, there’s Lenovo’s branding. While we’re going gaga over the new design language, unfortunately, Lenovo has sacrificed the DOLBY speakers available in the K4 Note in lieu of 1.5W speakers at the back of the K5 Note. 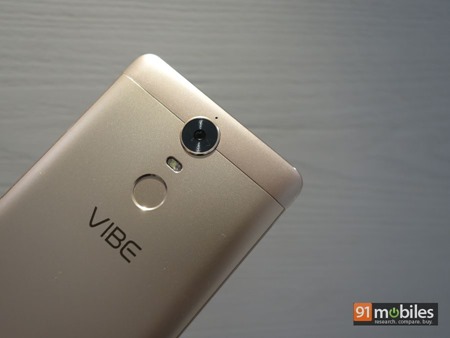 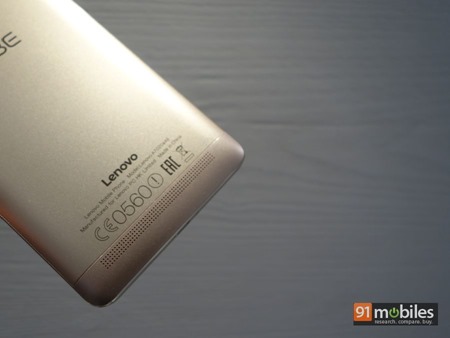 The Lenovo VIBE K5 Note’s window to the world is a 5.5-inch display, which similar to its previous iterations, bears a resolution of 1,920 x 1,080 pixels. The IPS display offers crisp text and impressive colours. The brightness also seems to be adequate though it’s quite reflective. The Chinese company boarded the VR bandwagon with the K4 Note by offering Theatermax technology, letting you enjoy any content in an immersive manner. Its successor also offers the similar functionality and can be purchased along with the AntVR headset. 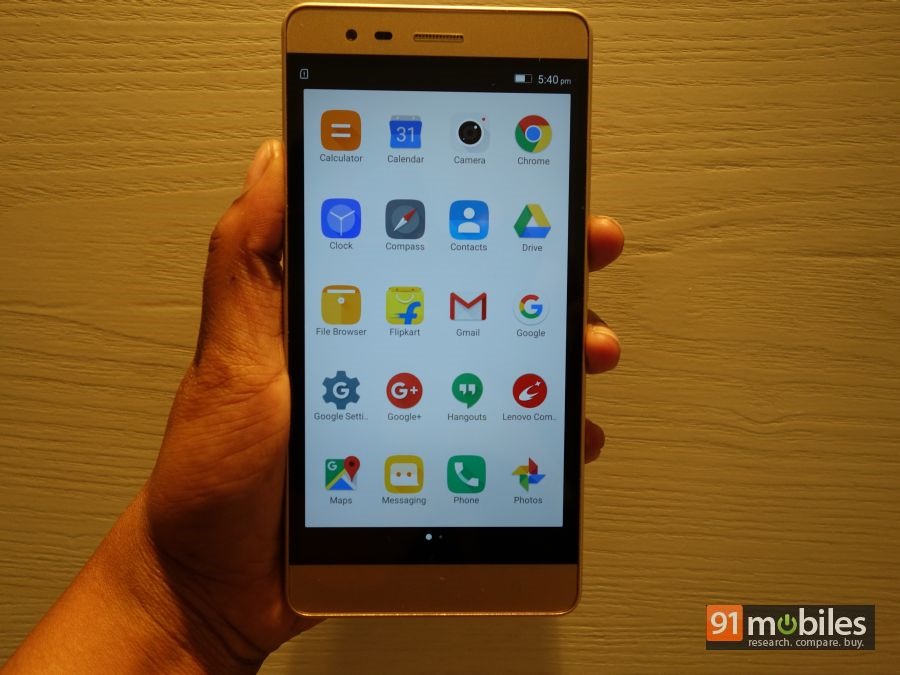 While the K4 Note featured a downgraded processor in comparison to the K3 Note, the VIBE K5 Note not only packs in a better chipset, but is also available with more RAM (4GB) along with the usual 3GB RAM option. The phablet is powered by the Helio P10 octa-core SoC tuned at 1.8GHz. While our demo unit offered 3 gigs of RAM, it’s the 4GB edition that has made us excited, since it’s among the most affordable handsets with this much RAM. The combination is loaded enough to take on anything thrown at it. During our brief usage as well, the phone handled everything smoothly without any trace of lag.

In fact, Lenovo has taken the gaming experience to the next level with the VIBE K5 Note. For an immersive experience, consumers will have an option to play via Theatermax controller, whereas hardcore gamers can have better precision with the Amkette Evo Pad 2. 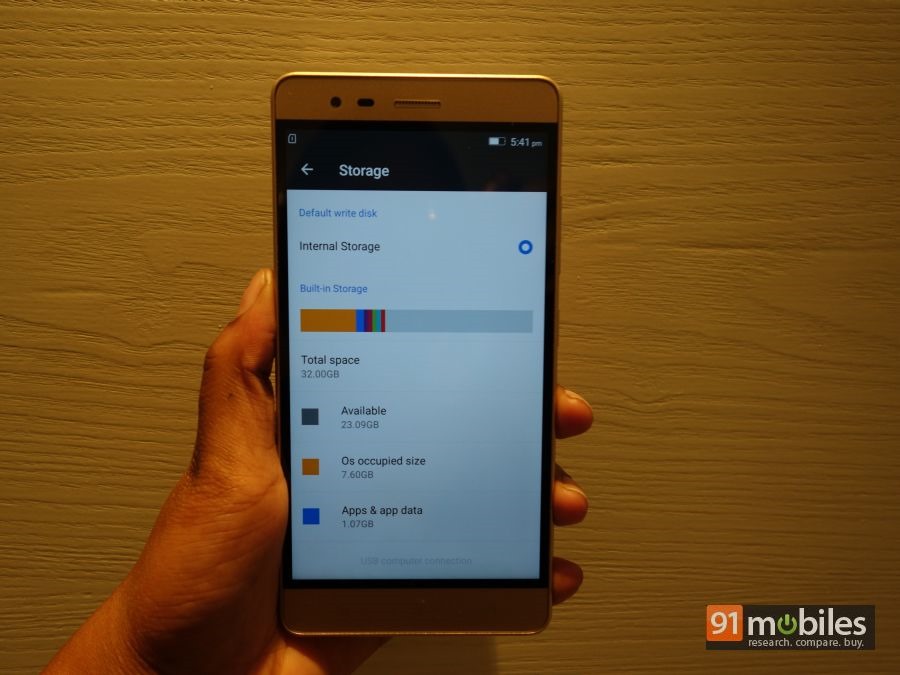 The storage stands at 32GB, out of which, around 23.10GB is available to the end user. The phone also supports memory expansion via microSD cards and can be topped up by an additional 128GB.

Coming to the cameras, the handset flaunts a 13-meg CMOS sensor at the back with support for phase detection autofocus. While the megapixel count is same as the K4 Note, the Lenovo K5 Note boasts a superior 8MP wide-angle shooter at the front, promising better selfies and groupfies. The camera interface is quite minimal for our liking as it only offers basic options like HDR, effects, etc. The image quality seems decent in indoor conditions, though we’ll like to test the camera by shooting in various conditions before reaching a conclusion. However, the camera misses out on 4K video recording, which is fast becoming an important feature in smartphones. 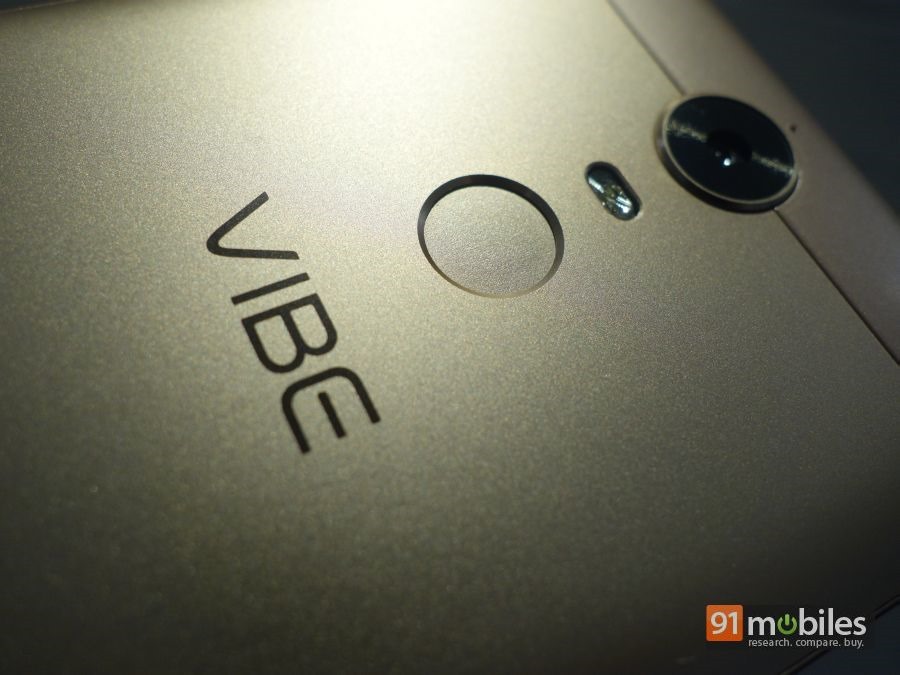 The VIBE K5 Note ships with the latest iteration of Android, i.e. 6.0 Marshmallow. The OS is topped by Lenovo’s proprietary skin dubbed VIBE UI, which comes with a multitude of features. The Secure Zone is an interesting option as it lets the user enjoy two different instances of WhatsApp on the smartphone.

Fuelling the K5 Note is a 3,500mAh battery, which should be able to last a day of use. However, it remains to be seen if its battery life can match rivals such as the Redmi Note 3 and the brand’s own ZUK Z1. The dual-SIM phone supports 4G along with usual options in the form of Wi-Fi, Bluetooth, and GPS. 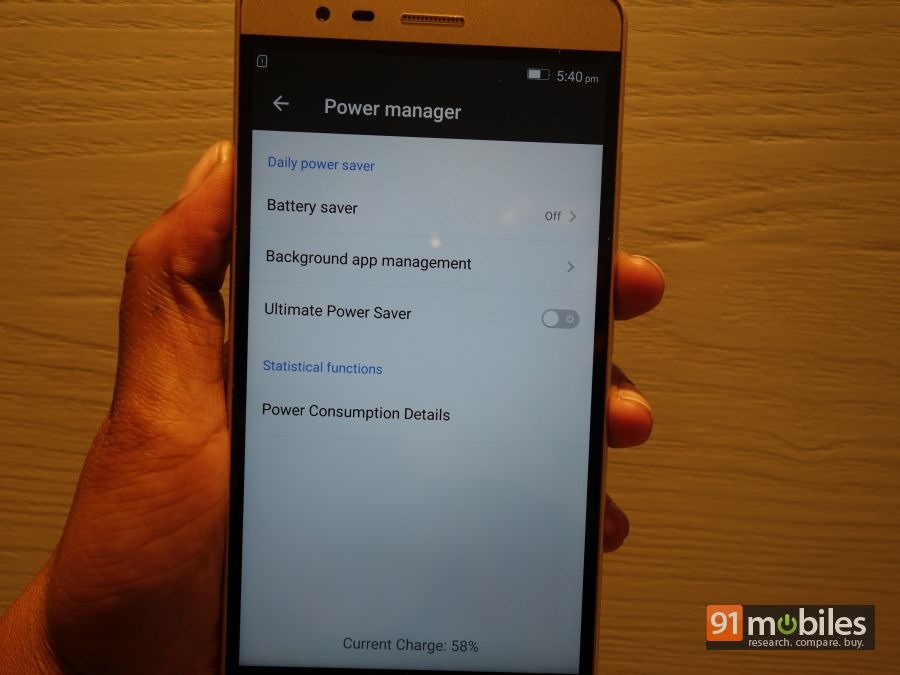 The Lenovo VIBE K5 Note aims to correct the mistakes made by its predecessor, and at the same time, combat the excellent choices that are available in its segment. The brand has also kept the pricing attractive, since the 3GB RAM version is priced same as the K4 Note, while the higher-end model carries a price tag of Rs 13,499. The phone will be available via open sales on Flipkart starting August 3rd, and as part of launch day offers, consumers would be able to purchase the VR headset and controller at discounted prices. Otherwise, they would need to shell out Rs 1,299 for the AntVR headset, Rs 999 for the Theatermax controller and Rs 1,999 for the Amkette gaming controller. The Rs 10,000 to Rs 13,000 price segment is currently the hottest category in the Great Indian Smartphone Bazaar, and we think Lenovo has just taken things to boiling point.

With inputs from Deeksha Koli