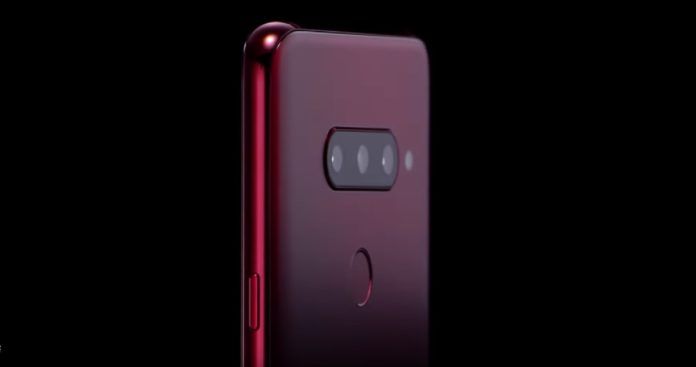 The V40 ThinQ smartphone is slated to launch at LG’s event on October 3rd in New York. The handset is confirmed to hit the market with a total of five cameras, three on back and two on front. Now, ahead of the launch, notable gadget tipster, Evan Blass (@evleaks), has spilled the beans on the camera implementation on the V40 ThinQ. The tipster has been pretty much accurate with the leaks in the past.

Starting with the rear-cameras, the V40 ThinQ will have triple sensors, horizontally aligned in the middle. As reported, the sensor on the right, which is rumoured to be 16MP, is there for taking ‘Standard’ pictures. The middle 12MP sensor is expected to produce ‘Super-Wide Angle’ shots, whereas the third sensor — an 8MP shooter — is said to be a ‘Telephoto Zoom’ lens. For selfies, the V40 ThinQ is expected to flaunt a ‘Standard’ 8-megapixel sensor on the front coupled with a 5-megapixel ‘Wide-Angle’ secondary lens.

Rounding up the specifications of the V40 ThinQ, the handset is rumoured to sport a 6.4-inch notched display with a resolution of QHD+ (3,120 x 1,440 pixels). It’s likely to employ Qualcomm’s Snapdragon 845 SoC, paired with 8GB of RAM and 128GB internal storage under the hood. A 3,300mAh battery with fast and wireless charging support is expected to fuel the handset.

Other details about the LG V40 ThinQ, including its price and availability, are not known at the moment. However, since the launch is just around the corner, we wouldn’t have to wait for long.